Immediately after River Falls scored the final point against Chippewa Falls, starters and bench players rushed the floor to celebrate the 2021 Big Rivers Conference Championship as a team. Photo by Reagan Hoverman teams had won 59 games this season while only suffering two losses.

The game had the highest stakes a regular season matchup can have: One evening of volleyball with the winner taking the conference championship. The match was played at River Falls High School in front of a near-sellout crowd. Chippewa Falls got out to an early 5-3 lead against the Wildcats and eventually grew to a 12-7 advantage midway through the first set.

“That first set was outstanding, I think that just shows that we’ve been there before and they’re not quite there yet in terms of experience,” Kealy said. “Once they lost that first set, it seemed like a different team. You play so hard and you’re so close and when you don’t get over the hump it’s very deflating. Coming back out to match that energy is very tough. They’ve got young players; I’m expecting this rivalry to be around for a couple of years.”

The third set was more of the same for the Wildcats. Chippewa Falls got out to a small 4-2 lead to start the set. However, the Wildcats took a 6-5 lead and never looked back. River Falls won the third set 25-19 to complete the sweep. Chippewa Falls only has two losses this season, both of them came against River Falls. Coach Kealy talked about the conference championship victory after the match.

“It’s amazing (to be conference champions again),” Kealy said. “I was super excited to have a team like Chippewa Falls that is just on the rise and you know they will give you a good match. This was an amazing match. We haven’t had a match like this probably since our 2017 season. To have a team like Chippewa that was a really strong competitor, I think made the community more excited. The student section was really into it tonight. What a great way to have a senior night, to have a packed house like this.”

River Falls was selected as the top seed for the Division One sectional one bracket. Because of that, the Wildcats have a first-round bye. The first game of the playoffs for River Falls will be played in River Falls on Saturday, Oct. 23, at 7 p.m. The Wildcats will play the winner of either New Richmond or Eau Claire North, both teams River Falls has defeated easily this season. Coach Kealy talked about how important it was to have an important match before the playoffs begin.

“We needed this match to go into the weekend,” Kealy said after the victory. “Because we were in a little bit of that midseason lull. We had taken some days off for homecoming and some other stuff. We needed something that made the girls focus back in and prepare. Having an environment like this helps when we get down the road in the playoffs. Most likely we will see them in the sectional final.”

If that matchup in the sectional final were to happen, it would be played at a neutral site. However, the site is predetermined, and that venue has been chosen as Chippewa Falls. 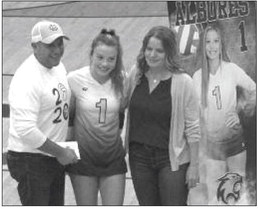 RFHS senior Dani Lien and her parents receive recognition on Thursday, Oct. 14, at senior night. Lien has been one of the most impactful seniors on the Wildcats roster this season.Photo by Reagan Hoverman 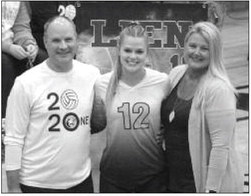 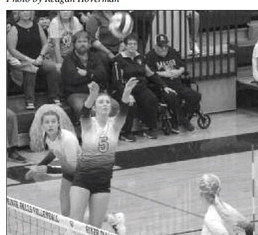