The 2021 Ellsworth Panthers tennis season has come to an end after the conclusion of the sectional meet last week. The Panthers finished the season with a 12-3 record which earned them a third-place finish in the Middle Border Conference standings.

The Ellsworth tennis roster for this season was similar to many other rosters throughout the Middle Border and Big Rivers Conference schools. Most of the varsity players, six out of 10, were seniors for the Panthers. Panthers tennis coach Brad Baker was in his second year working with the team. He stated that going into the season he knew the roster would be good because of the experience he had with several senior leaders.

Of the entire roster, one player did advance through the subsectional, compete in the sectional meet and win her respective event. That player was the aforementioned Betsy Foster, who competed in the #4 singles event. However, her victory at sectionals didn’t qualify her for the state tournament.

According to coach Baker, in tennis, only the #1 singles and #1 doubles teams regularly go to state. There is a condition where #2 singles or #2 doubles could go to state, but it requires a special circumstance. The Wisconsin state tennis tournament is essentially for #1 singles and #1 doubles teams to compete in. After the season ended, coach Baker reflected on his group of girls this season, especially his seniors.

“Our seniors showed great leadership,” Baker said. “I walked into this group who are now seniors when they were juniors, and they’ve run captains’ practices in the summer and are good leaders. Going forward, they are passing it down and they make sure that the underclassmen know it’s up to them to take the torch.”

Baker said that the group of seniors helped with overall team play this season. Not only did they host additional captains’ practices, but they also boosted morale and confidence in the team. Baker said that once players saw they could compete with other teams in the conference, the whole roster began to play better.

One example of that was against Altoona, the team that won the Middle Border Conference this season. In the Panthers’ match against Altoona, they won three matches compared to Altoona’s four. Although it was a loss, Ellsworth players realized that they could compete with the best team in the conference.

Baker stated that he hopes his players will do all they possibly can to continue improving their tennis skills before next fall when the 2022 season begins. Because of a large number of graduating seniors, there will be a lot of varsity spots up for grabs that will be filled by younger talent, likely including some junior varsity players. “There are some JV players who are going to play well at the varsity level,” Baker said. “But some will be pushed up to a higher flight and it will be an experience for them. We hope they go to camps and clinics to get as much under their belts as they can before the next season starts.”

Despite losing a large group of seniors, one thing that Baker hopes remains consistent is the attitude, the culture, and the leadership of younger players becoming the upperclassmen on the team, carrying on what the seniors this year started.

“I hope they take responsibility,” Baker said. “You always wonder about leadership in freshman and sophomores,” Baker said. “Even our juniors haven’t been in the program long. But I see them talking about it. I’ve seen them telling younger players, ‘Hey, this is what you need to do.’ Which makes it nice for me because then I can just worry about the tennis matches.”

The Ellsworth Panthers tennis team graduates six seniors this year and will likely have a completely revamped roster by the time the next tennis season starts next August. 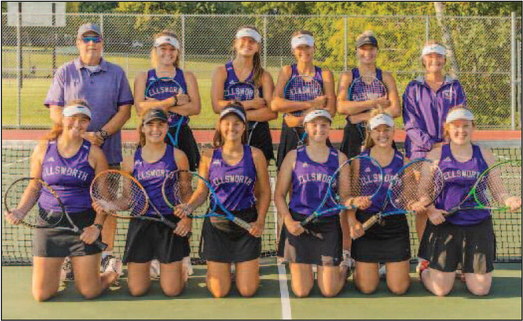