On Friday, Oct. 15, high school football teams throughout Pierce County were in action as it was the last week of the regular season. Teams such as Prescott and Spring Valley made bids to try to be higher in the playoff seeding, and other schools were simply trying to get into the postseason.

The first team looking to make some noise in the playoffs is the Prescott Cardinals football team, under the direction of head coach Jordan Hansen. This season, Prescott began the year with some of the best football it played in several seasons. Through six games, Prescott was 5-1 and looked to be competing for a Middle Border Conference championship.

The final game of the regular season against Osceola was a brutal loss for Prescott. In that game, the Cardinals led 21-8 at halftime and were in control on both sides of the ball. The first half lead included scores from running back Aiden Russell and Phil Seifert.

Coming out of the half, Osceola played dominant football. Four minutes into the third quarter Daric Swanson scored on a one-yard touchdown run. Three minutes later, running back Lucas Sedivy scored on a 27-yard touchdown run to tie the game 21-21. With five minutes remaining in the fourth quarter, Osceola took the lead after an eight-yard touchdown run by Sedivy. The 28-21 victory for Osceola dropped Prescott’s conference record to 4-3 for the season.

Because of the three-game losing streak, Prescott was given the fifth seed in the WIAA playoffs. The Cardinals will have to go on the road on Friday, Oct. 22, to play West Salem, a team that finished the season with a 7-1 record. That game is slated to kickoff at 7 p.m.

Despite a 28-6 loss on the road in the final game of the regular season against Cadott, the Spring Valley Cardinals finished the season with a 7-2 record, including a 6-1 record in conference play, which earned the Cardinals a two-seed for the upcoming WIAA playoffs.

Cardinals head coach Ryan Kapping spoke about what it’s like to be conference champions in the Dunn-St. Croix Conference.

“It’s a nice accomplishment for this group of players,” Kapping said. “We had very little returning varsity experience so to be able to secure a conference championship speaks to the work ethic and improvement of the players over the course of the season. We have been pretty banged up throughout the year with injury and illness and have had a lot of different guys step in and contribute to the team’s success and that is really exciting to see.”

Throughout the season, Spring Valley averaged 32 points per game and had more than 3,300 yards on offense for the year. The dominant offense helped propel Spring Valley to a 7-2 record which gives them a premium seed for the playoffs. Coach Kapping spoke about his team’s offense.

“Our offense allows us to have many different individuals end up getting carries and it makes it hard to focus on one person,” Kapping said. “Additionally, we have been able to mix more pass opportunities into our offense this year and we have some good players throughout our offense that take advantage of the opportunities they get with the ball in their hands and make plays when called upon to do so.”

Moving forward, Spring Valley will host its first playoff game of the year against the Webster Tigers, a seven seed. Kapping spoke about the playoff mentality.

“Our focus going into the playoffs remains the same each year. We focus on the week and opponent at hand and don’t look ahead,” Kapping said. “We just trying to play football for as long as we can.”

The aforementioned home game against the Webster Tigers is on Friday, Oct. 22. That game is slated to begin at 7 p.m.

The River Falls Wildcats have earned the fourth seed in the Division 2 WIAA playoff bracket after concluding the regular season with a 43-14 blowout victory on the road against Sparta on Friday, Oct. 15.

The Wildcats have had an objectively impressive regular season in the Mississippi Valley Conference standings. RFHS finished the regular season with a 7-0 record in conference play which was part of a 7-3 overall record for the season.

The Friday night game against Sparta featured River Falls senior quarterback Vito Massa who played perhaps his best game of the year. Massa looked more like Joe Montana in his prime than he did a high school quarterback. He threw three passing touchdowns in the first half and two in the second half. He tallied 242 passing yards and nine completions on 14 attempts with a quarterback rating of 147.3 on a scale of zero to 153.8.

Massa’s nearly flawless offensive performance was assistant by senior wide receiver Michael Schurman, who had 228 receiving yards on seven receptions, three of which went for touchdowns.

The 43-14 victory for the Wildcats was the team’s seventh win in the last eight weeks. River Falls was given the fourth seed in the Division 2 playoff bracket and will host La Crosse Central on Friday, Oct. 22.

It won’t be the Wildcats’ first meeting with La Crosse Central this season. On Friday, Sept. 17, River Falls hosted La Crosse Central in a game that featured a 42-14 River Falls victory. That game was essentially over in the first half. River Falls put up 28 points in the opening 24 minutes and went into the break with a 28-7 lead.

That first-round playoff matchup is slated to begin at 7 p.m. and will be played at the University of Wisconsin-River Falls.

The Wolves finished the season with a 4-5 overall record. However, a 4-3 record in Dunn-St. Croix Conference play automatically qualified Elmwood/Plum City for the playoffs according to current WIAA playoff rules.

The Wolves finished in a tie for third place in the Dunn-St. Croix Conference standings for the season. It was a four-team tie for third place with Glenwood City, Cadott and Turtle Lake. The Wolves averaged only 16 points per game this season and struggled against teams with high-scoring offenses.

On Friday, Oct. 22, they will have a chance to prove that narrative wrong when they travel to Pepin/Alma for the first playoff game of the season. Pepin/Alma has averaged just over 38 points per game this season which contributed to a 7-1 overall record. That game is slated to begin at 7 p.m. 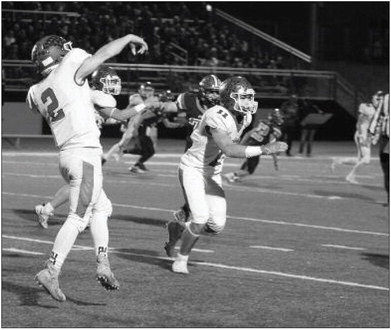 Quarterback Grant Stanton hurls the ball during the Cardinals’ road loss to the Osceola Chieftains on Friday, Oct. 15. The Cards hit the road Oct. 22 to take on West Salem in the first round of WIAA playoffs. Photo courtesy of Faun Stanton