On Friday, Oct. 15, the Prescott girls golf team was welcomed home from their state championship in Madison. The team participated in a parade that took them past Malone Intermediate, Malone Elementary, Prescott Middle School, downtown and past St. Joseph Parish School in celebration of the team’s second state title in as many years.

During the parade, the team was accompanied by Officer Jesse Neely and a Prescott Fire truck at 1 p.m. on Friday. The team, the Prescott School District and the larger Prescott community were encouraged to attend the celebration. The team’s five varsity starters include Ava Salay, Liz Rohl, Rhi Stutz, Jessica Heinsch and Maddie Reiter.

The 2021 WIAA State Girls Golf Tournament was a two-day event at the University Ridge Golf Course in Madison on Oct. 11-12. After the first day of action, the Prescott Cardinals had a 10-shot lead over second-place Saint Croix Central. The individual state title race between Prescott’s Ava Salay and Saint Croix Central’s Sally Vangsness was deadlocked after day one, when both players posted a six-overpar round of 78.

Prescott’s second day of action was even better than the first. On day two, the Cardinals’ 10shot lead as a team quickly ballooned into a 33-shot lead just a couple of hours into day two. The individual state title race between Salay and Vangsness was essentially over after the first two holes of day two. On the first hole, Salay made par and Vangsness made double bogey. At the par-five 11th hole, their second of the day, Salay made birdie and Vangsness made a quadruple-bogey.

When the second day of play was over, Prescott’s total team score was 671, which won the championship by an astounding 49 shots. To put the margin of victory into context, the difference in total score between Saint Croix Central’s second-place finish and The Prairie School’s third-place finish was three shots.

Leading the charge for Prescott was Salay, who posted a two-under-par round of 70, the best individual score of the second day by eight shots. In past interviews with The Journal, head coach Chad Salay stated that Ava Salay is a momentum player and can get hot at any moment. That was never on display more than during the back nine charge on day two. Salay made five birdies in a nine-hole span to post the only under-par round of the tournament.

Salay’s score, in addition to Liz Rohl’s 84, Rhi Stutz’s 90, Jessica Heinsch’s 89 and Maddie Reiter’s 105 helped the team win another state title. After the tournament was over, Prescott head coach Chad Salay talked about what it was like to bring more hardware back to the Prescott trophy case.

“It feels great, this is a whole year process and is a year of hard work,” Chad Salay said. “It’s awesome to see it all come together – all of the ups and downs. It’s just a really cool feeling to know that we did it.”

The win at University Ridge was the first for Prescott at the standard state championship venue. The 2020 State Girls Golf Tournament was held in Kohler due to COVID-19 regulations in Madison at the time that the golf tournament was supposed to take place. Chad Salay spoke about winning at two different venues.

“Actually, it’s kind of a fun thing, the fact that we’ve done it now at two venues, that’s a pretty unique thing,” Chad Salay said. “To do it at University Ridge, that feels official. Not that anyone wasn’t there last year, but it just feels a little bit more official now.”

Chad Salay also talked about what led to the massive 49-shot margin of victory in the state tournament.

After hoisting a second consecutive state championship, Chad Salay thought back to when he was hired as the Prescott golf coach. He talked about what the program was like back then and where it is now.

“No, (I didn’t think we would be here when I started), not even close, we barely even had a team,” Chad Salay said. “I was just getting Ava (Salay) into golf and I thought maybe someday she would play for us. There was no thought of her coming in, getting other girls, there was no blueprint. It’s been quite the journey. Even beyond this team, we’ve got 40 kids in a camp in the summer and some awesome young talent coming up. It’s just rolling and a good spot to be in. It motivates me to keep going. I love it and my assistants are in the same mind frame.”

Ava Salay not only began golfing, but she developed into the best golfer in Prescott history. For the past three years, she’s been working toward winning an individual state title. On Tuesday, Oct. 12, she accomplished that. After the round, Ava Salay reflected on the experience.

“I started the round pretty nervous, being tied for the lead,” Ava Salay said. “After the first three holes, I got settled in and felt confident. Everything went smoothly for me and it was great. On hole five I made my first birdie and stuck one to ten feet and then on hole eight I made like a 30-footer. I don’t think I’ve ever had approach shots be stuck and long putts are falling at the same time. I’ve always had it be one or the other.”

Ava Salay had all aspects of her game on full display on the second day of the tournament and it was one of the many reasons that Prescott won another state championship. Her play, in addition to great senior leadership from Liz Rohl and Jessica Heinsch, as well as other varsity contributions, made Prescott the best team in the state for the second consecutive season. 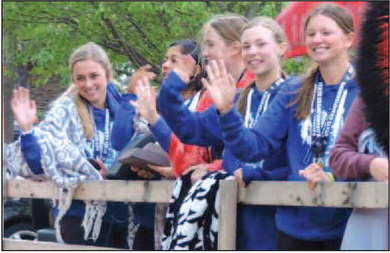