JOPLIN, Mont. – On Sept. 25, 2021, an Amtrak passenger train derailed in Montana and several passengers were injured. The cause of the accident is still undetermined but many passengers are faced with the aftermath of the traumatizing event, including three Pierce County residents who were aboard the train during the derailment.

Ellsworth residents Jasmine and Brent Place were on the Amtrak train during the derailment. The two did not TRAIN

endure any serious injuries while on their way to spend the weekend with family in Glacier National Park.

The father-daughter duo decided to go on a last-minute trip to meet some family and thought the train ride would be a new adventure for them, as it was the first time either of them had ridden on a passenger train.

“My brother and sister-in-law have a timeshare out by Glacier National Park, and my nephew was going to spend the week with them and he decided to take the train and they asked if we would like to go as well and it was really last minute and we thought it would be a once in a lifetime opportunity with the scenery and we had never been on a train before,” said Brent Place.

The trio was heading to meet Steve and Sherry Marson, who were already at their timeshare.

With just seven hours remaining in the trip, the train derailed on flat land in rural Montana (near Joplin) and it quickly became a trip they would never forget.

“I was sitting on the right side and my dad was in the seat right in front of me and a few minutes before the crash, I closed my eyes for a minute and all of a sudden, I opened my eyes and the train was tipping and it felt like we were flying and we were scraping against the gravel,” said Jasmine Place.

The train had made a stop about an hour before the crash and the two remember the calm before the storm very clearly.

“We were in the second from the back car, the last three detached and we were in the middle car that detached and tipped,” Brent Place said. “I had just finished watching a movie and I was just leaning against the window and we started going around a gentle curve and then I saw that the middle of the train started to tip and by the time I even finished my thought we were on our side scraping against the gravel on the window.”

They remarked that because the train wasn’t full of people and where they were sitting may have been a factor in escaping serious injury. The two commended the local communities for the quick and helpful volunteers who came to the aid of the passengers. Joplin is located about 200 miles north of Helena.

“The aftermath is what stood out to me the most,” Jasmine Place said. “We were sent to a nearby school where they provided help for all of us. They were taking really good care of us. The school was amazing and they had everyone from the surrounding communities coming in and giving us food, cleaning us up and they were all so welcoming.”

Although traveling by train is one of the safest easy to travel, derailments can be considered common in some circumstances. According to an article in the Washington Post in 2015, train derailments averaged about 35 per year tracking back to 1976. Most of the accidents were harmless, but the cause is usually the tracks and not the trains.

Amtrak is still investigating the cause of the accident; a total of eight train cars derailed out of the ten passenger cars comprising the Empire Builder train, resulting in three deaths and more than 50 people injured. About 141 passengers and 16 crew members were on board. There has not been any official statement about the cause.

Amtrak Chief Executive Officer William J. Flynn said in a previous statement, “We share the sense of urgency to understand why the accident happened; however, until the investigation is complete, we will not further comment on the accident itself.”

Although an official cause of the accident has not been determined, the Places feel that the tracks quite literally just gave out.

“Just from my view and what I saw, I think the track just gave out and I definitely don’t think it was the speed and the track really just gave out,” said Brent Place.

Rescuers from six counties responded to the scene while survivors were taken to two separate sites.

Another photo taken after an Amtrak train derailed near Joplin, Mont. on Sept. 25. About 141 passengers were on board, including three Ellsworth residents who escaped serious injury. Photo courtesy of Jasmine and Brent Place 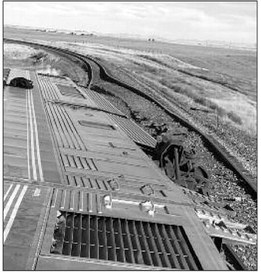