Ellsworth has one runner at WIAA meet

On Saturday, Oct. 23, at the WIAA Division 2 Sectional in Rice Lake, two Prescott cross country runners, one boy, Tyler Loucks, and one girl, Ella Johnson, qualified for the state cross country meet as individuals which will be held on Saturday, Oct. 30, at The Ridges Golf Course in Wisconsin Rapids.

Both the Prescott boys and girls cross country teams competed in the sectional meet in Rice Lake on Saturday. As a team, the boys missed out on going to state by one point. The Osceola Chieftains finished in first place with 55 points, Northwestern in second place with 85 points and Prescott finished in third place with 86 points. Only the top two teams at each sectional go to state. Prescott coach Matt Sachs spoke about the boys coming within seconds of going to state as a team.

“The boys missed out on state by a single point, which stings a bit because I know we all wanted it so badly,” Sachs said. “Unfortunately, it’s a part of sports and life. We are so proud of both teams. It was a really fun year with a great group of kids.”

Leading the charge for the boys was Prescott senior Loucks. Loucks posted a time of 16:12.27 which was a Prescott school record. Loucks won the boys’ race by 15 seconds over secondplace finisher Quinn McDonald of Osceola. The race victory at sectionals was the first win of Loucks’ racing career. Coach Sachs spoke about Loucks’ victory.

“It was the first time he had ever won a race,” Sachs said. “Quite the time to do it. He set a personal record, and we believe an all-time Prescott record. He’s a great kid and deserves all the success he has had this year. He has put in so much time and effort in and out of every season and it’s great to see everything come to fruition for him.”

Leading the charge for the girls was Prescott junior Ella Johnson. Johnson posted an overall time of 20:23.91, a time that was good enough to earn her a spot at the state cross country meet as an individual. She finished in seventh place overall at the girls’ race. Coach Sachs spoke about Johnson.

“Ella (Johnson) finished seventh overall to claim the last individual spot to go to state,” Sachs said. “It was a highly competitive race, and the teams were very spread out. One of the girls tripped around the one-mile mark, causing quite the pile-up. At the time, Johnson was toward the front of the race when the pile-up happened and was able to navigate through it to hold a positive position.”

Johnson’s experience as a runner helped her navigate through the collision in the race and maintain the pace that eventually allowed her to qualify for state as an individual. Coach Sachs spoke about what makes her great.

“She’s also a really great kid,” Sachs said. “We are so happy to see her find so much success in her first year of cross country. She does everything the right way, from the classroom to practice to the races.”

Throughout the season, both Loucks and Johnson regularly finished high in the race results as individuals. According to coach Sachs, there was confidence among the coaching staff of their ability to go to state as individuals.

“I did (have confidence) yeah,” Sachs said. “If everybody had raced the way they had all year, we thought Tyer would be almost a lock to go to state as an individual. We also believed that Ella could do it. She had paced well all year and she was peaking these past few races. We knew that if she had a great race like she had been, that she would have a good shot.”

The state cross country meet is on Saturday, Oct. 30, at The Ridges Golf Course in Wisconsin Rapids. Loucks will run at noon and Johnson is slated to run at 1:45 p.m. 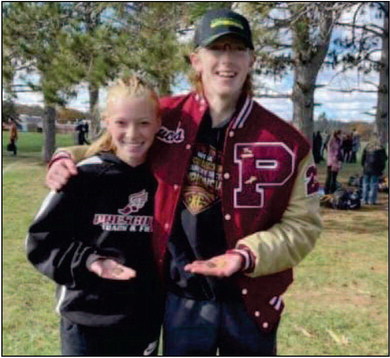 Prescott state qualifiers Ella Johnson and Tyler Loucks celebrate together with their medals after the sectional meet on Saturday, Oct. 23, in Rice Lake. Photo courtesy of Matt Sachs