Senior wide receiver Ashten Quade dives for extra yards as several Saint Croix Central defenders try to bring him down. Quade and the rest of the explosive Ellsworth offense put up 40 points in the first half during the blowout victory against Saint Croix Central on Friday, Oct. 22.Photo by Gaylen Bicking
News
Ellsworth, Spring Valley football survive and advance; Prescott, Elmwood/Plum City fall in playoffs

The first round of the playoffs has concluded, and some hometown teams are happy with their victories, and others are frustrated as their seasons ended in a first-round exit from the WIAA postseason.

The first local team to win its Friday night, Oct. 22, game and advance to the second round of the postseason was the Ellsworth Panthers, a team that defeated conference rival Saint Croix Central 40-6 in its opening home game of the playoffs.

In the first quarter, senior running back Ashten Quade of the Ellsworth Panthers scored on a two-yard rush to take a 6-0 lead against Saint Croix Central. Less than four minutes later, Quade again scored. This time it was a 42yard touchdown run followed by another unsuccessful two-point conversion to take a 12-0 lead.

The second quarter consisted of four Ellsworth touchdowns, two on the ground and two through the air. The first was a 24-yard touchdown pass by senior quarterback Jack Janke to Quade to take a 20-0 lead. Approximately two minutes later, senior running back Max Grand joined the scoring party with a 49yard touchdown run. Three minutes later Janke scored on a 40-yard quarterback keeper play to take a 34-0 lead. The final score of the half was a five-yard touchdown pass from Janke to Quade. Going into the half, Ellsworth had a 400 lead.

Although it was a playoff game, the younger reserve players once again got the see the field in Ellsworth. The explosive Ellsworth offense is something that Saint Croix Central simply couldn’t compete with. According to Wissports, Ellsworth is averaging over 46 points per game this season and has accumulated over 3,300 yards of offense in nine games, including 52 touchdowns.

The second half of the game saw no score in the third quarter and a garbage-time touchdown by Saint Croix Central in the fourth quarter to make the final score 40-6. Head coach Rob Heller and the Ellsworth Panthers advance to the second round of the playoffs and will play the Osceola Chieftains.

Because Ellsworth is a two seed and Osceola is a three seed, Ellsworth will host the Chieftains on Friday, Oct. 29. That game is slated to begin at 7 p.m.

Spring Valley opened the scoring with just under seven minutes left in the first quarter when quarterback Wyatt Goveronski connected with Tyler Bowman for a 24-yard touchdown pass which was followed by a successful PAT to take a 7-0 lead. In the second quarter, running back Tristan Neisinger scored on a two-yard touchdown run to take a 13-0 lead. The score was one of 11 carries for Neisinger on Friday night. On those 11 carries, he accumulated 35 rushing yards. In the third quarter, neither team scored. The fourth quarter featured one score with seven minutes left in regulation. Goveronski scored on a three-yard touchdown run to take a 19-0 lead, the score that Spring Valley held until time expired.

Spring Valley head coach Ryan Kapping spoke about the win and how the defense and offense came together to produce a quality playoff victory.

“Overall, the defense played really well and was able to turn them over on downs and get the ball back to the offense,” Kapping said. “The offense was efficient at moving the chains and possessing the football. Our time of possession was about double what Webster’s was and that was a big key to our success.”

On Friday night Spring Valley will host the #3 seed Pepin/Alma. Coach Kapping spoke about what his team will have to do to get another playoff victory.

“To be successful on Friday night we will have to play a really good football game,” Kapping said. “We have to minimize mistakes and play great defense. Pepin/Alma executes at a very high level and they don’t make mistakes, so we have to be consistent and try not to give up the big play. Offensively, we need to possess the football and convert first downs and score points when we have the opportunity to do so.”

Coach Kapping stated that Pepin/Alma has played in a lot of big football games over the years, and said the pressure of a second-round playoff game likely won’t impact their roster or coaching staff.

“They are well coached, play with a great pad level and have some tremendous athletes and I think it’s going to be a really good football game on Friday night,” Kapping said.

On Friday, Oct. 22, the Prescott Cardinals football team suffered its fourth consecutive loss to end the season. The final game was in the first round of the playoffs on the road against West Salem.

After a scoreless third quarter, the game was tied going into the fourth quarter of the firstround playoff game. The first West Salem drive of the fourth quarter stalled out and ended in a 31-yard field goal that split the uprights to take a 10-7 lead.

With five minutes left in the game, Russell scored on an 11-yard touchdown run to take a 14-10 lead. West Salem put together a twominute drive that ended in a 27-yard touchdown pass from Noah LaFleur to take a 17-14 lead that West Salem held until the end of the game. With the victory, West Salem advanced to the second round to play the #1 seed Northwestern. Prescott finished the season with four straight losses, ending the year with a 5-5 overall record.

The Elmwood/Plum City Wolves struggled in the first-round playoff game against Pepin/Alma on Friday, Oct. 22. The Wolves couldn’t find a way to stop the Pepin/Alma offense, which was the biggest factor in the 47-14 loss on the road.

The Wolves went into the game as a #6 seed. Pepin/Alma, the home team, was the #3 seed. Pepin/Alma wasted no time jumping out to an early lead. With three minutes remaining in the first quarter, quarterback Evan Creighton connected with Colton Brecka on a seven-yard touchdown pass to take a 7-0 lead.

In the second quarter, Pepin/Alma added two more touchdowns, one passing, and one rushing, to take a 21-0 lead going into the halftime break. The first two scores of the third quarter were again done by Pepin/Alma. Two passing touchdowns made the Pepin/Alma advantage 33-0, essentially ending the game with only minutes to play in the third quarter.

With one minute remaining in the third quarter, Wolves quarterback Luke Webb threw a 27yard touchdown pass to Ethan Rupakus, followed by a two-point conversion to make the score 33-8.

In the fourth quarter, Pepin/Alma added two more touchdowns while Elmwood/Plum City scored one which was an 11-yard touchdown run by Trevor Asher. The final score was a 4714 Pepin/Alma victory.

Pepin/Alma advances to play on the road against Spring Valley on Friday, Oct. 29, at 7 p.m. Elmwood/Plum City finishes the season with a 4-6 record overall including a 4-3 record in Dunn-St. Croix Conference play. Despite ending in a tough loss, the Wolves’ season resulted in a postseason berth after a successful regular season. 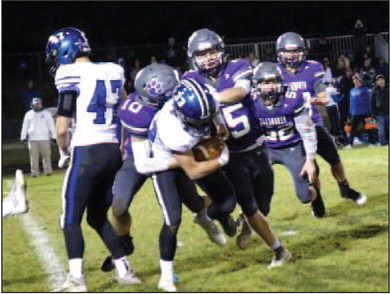 Senior defensive back Jack Voelker (#10) and sophomore linebacker Griffin Blomberg come together to bring down the Saint Croix Central runner. Voelker, Blomberg and the rest of the Panthers’ defense only allowed six points in the first-round playoff win against Saint Croix Central. Photo by Gaylen Bicking