During the “Once Upon a Library” gala pledge drive, many generous community members raised their paddles to donate toward furnishings and landscaping for the Ellsworth Public Library’s new home at 388 W. Main St.Photo by Sarah Nigbor
News
‘Once Upon a Library’ Gala inspires giving

By Sarah Nigbor ELLSWORTH – When a community comes together with a common dream and purpose, magical things can happen. The “Once Upon a Library” Gala held Saturday, Oct. 23 raised an additional $65,382 to be put toward making the new Ellsworth Public Library location a legacy for generations to come.

While the $200,000 goal for the event was not met, there is still time and many ways in which the public can donate, whether it’s through pledges or the “funda- need” campaign. The funds from the gala will be put toward the cost of furnishings and landscaping, which

The future home of the Ellsworth Public Library (388 W. Main St.) was the site of the “Once Upon a Library” fundraising gala event Saturday, Oct. 23. The evening featured live music, a cash bar, hors d’oeuvres, dinner, speakers, raffles, online auctions and a pledge drive. Photo by Sarah Nigbor

Ellsworth Library Director Tiffany Meyer was overwhelmed with gratitude and the magnitude of the moment during her thank you speech at the “Once Upon a Library” gala Saturday, Oct. 23 in the former BMO Harris Bank building.

Photo by Sarah Nigbor is the final phase of the library project.

Emcee Russ Korpela, coowner of Common Man Tap & Table, opened the festivities by sharing the impact libraries had on him as a child. When he discovered the magic of interlibrary loans, he had materials from 50 different libraries at his fingertips.

“Back then, that was really amazing,” he said.

Libraries provide avenues to information, whether that’s through magazines, audio books, the internet, traditional books, newspapers or databases. The library is the heart of a community.

He listed the amenities Ellsworth offers, such as a hardware store, a grocery store, beautiful schools, a medical clinic, a hometown newspaper and a craft beer bar.

“We could maybe think of a life without one of those things, but could you imagine going through life without a library?” he posed to the audience. “Libraries are a thread in the fabric of our lives.”

Korpela told how the Ellsworth Public Library was established in May 1924 in the home of Mrs. Badger, which was on the site of the old fireman’s opera house. It eventually moved to the basement of the building next to the Lord Abstract Company on Main Street. In 1963, it moved to the Community Building’s basement and finally made the former movie theater’s upstairs (the current building) home in 1975. The library currently serves more than 2,800 patrons annually and in 2019, loaned out more than 65,000 items.

“This is a fantastic legacy for our community,” Korpela said. “Try to imagine people sitting in Mrs. Badger’s home, dreaming of a library. Our kids and grandkids may be sitting at the next gala in 50, 60 years. That’s what makes communities like Ellsworth special.”

Keynote speaker Kevin Kling took the stage next. Kling is a well-known author, playwright and storyteller whose commentaries are heard on National Public Radio’s “All Things Considered.”

He became fascinated with language and words at a young age, in part due to libraries, but also thanks to his dad’s “farm vernacular.”

“It’s not what people said, it’s how they said it and why,” Kling said.

Libraries allowed him to follow his curiosity to wherever it took him. Kling, who was born with a congenital defect which made his left arm three-quarters the size of his right, learned that if you can tell a story about something, it can’t control you anymore. The library gave him a place to belong, but also fostered his longing to be somewhere else, and books took him to those places. Libraries provided hin a safe place to discover new things.

“In libraries I found families I didn’t even know I had,” Kling said. “A story can open new worlds that are already there. You can tell the health of a town by its library.”

With the digital age, libraries haven’t faltered as many thought they might, but have expanded even more, Kling said. A library can fill our need for connection, recognition and belonging, not just through books, but through programming, events and services.

In the book “Keep Moving” by Maggie Smith, the term “beautiful emergency” seemed appropriate for the gala affair, Meyer said.

“It’s not a beauty emergency as in your hair or makeup,” Meyer said. “But a fleeting moment where if you blink, you’ll miss it. Look around you and take it all in. And while we’re all excited about our new library, perhaps none are more excited than the kids and their families.”

“I’ve explored life in many places,” Whelan said. “In big cities like Las Vegas and Seattle, and small towns like Baldwin and Ellsworth.”

Wherever she has gone, she has had the desire to make connections and feel at home, and has always felt a community’s library is a welcome center with arms wide open.

“The library has always met me where I am with compassion and grace,” Whelan said. “It can be hard to find your place in a small community where family roots run deep in the soil.”

She and her husband moved to Ellsworth a few years ago and found a welcoming community at the library, where people wanted to know them and they wanted to get to know people.

“I’m very proud to be part of a community that has chosen to expand the reach of the library’s open arms,” Whelan said.

Before the evening’s pledge drive began, Korpela reminded everyone that a library is an important economic development tool. Children who read on a regular basis do much better in school, and in turn will become productive members of society. The library also brings people into town, where they may eat lunch, visit other businesses or shop.

Ellsworth Cooperative Creamery and Hiawatha National Bank pledged to double the evening’s pledge drive funds raised up to $10,000. The pledge drive brought in $23,645, and total proceeds for the evening (which included a silent auction, a premier auction, dinner tickets, and funda- need) raised $65,382.

The library hopes to move into its new home in Spring 2022. To learn more about the project or to make a donation, please visit www.friendsofepl. org/gala 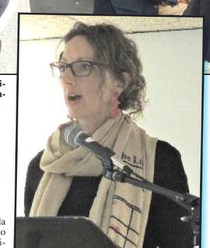 Ellsworth business owner and library board member Angie Whelan said when she moved to Ellsworth, the library was like a welcome center that accepted her with open arms. She touted a library’s role in drawing communities together. Photo by Sarah Nigbor 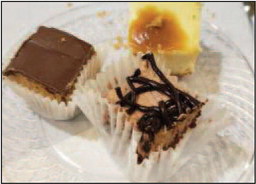 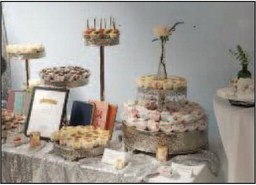 Storyteller, playwright and author Kevin Kling, heard on NPR’s “All Things Considered,” enthralled the audience at the “Once Upon a Library” gala with tales of how the library sparked his love of words and stories. Photo by Sarah Nigbor 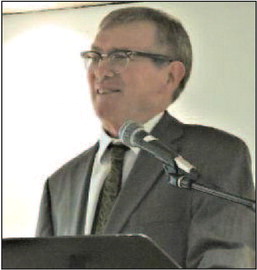