At left, Prescott senior Madison Matzek serving during the Cardinals’ home playoff game against Elk Mound on Tuesday, Oct. 19. Above, Prescott Cardinals senior Morgan Lundeen moments before serving during Prescott’s regional playoff game on the road against Saint Croix Central on Thursday, Oct. 21. Matzek and Lundeen are two Prescott seniors that will be missed next season. At right, Lila Posthuma of the Prescott volleyball team leaps as she goes for a kill against the Saint Croix Central Panthers on Thursday, Oct. 21.Photos by Reagan Hoverman
News
Prescott volleyball season ends against Saint Croix Central

The Prescott girls volleyball team defeated the Elk Mound Mounders in three consecutive sets in the first round of the WIAA playoffs on Tuesday, Oct. 19. The Cardinals’ secondround matchup against Saint Croix Central ended in a 3-0 victory for the Panthers, knocking Prescott out of the postseason.

Before being swept by Saint Croix Central on Thursday, Oct. 21, Prescott began postseason play on Tuesday, Oct. 19, at home against Elk Mound in a first-round playoff matchup. Prescott went into the game with the eighth seed for its respective playoff bracket. Elk Mound was the ninth seed and therefore had to travel to Prescott.

Two points into the first set, Prescott sophomore starter Reese Ptacek appeared to become nauseous and ran back to the locker room. The match was stopped so that Prescott could get a substitute into the game to replace Ptacek and suddenly the Cardinals were missing their best player in a playoff game.

A few minutes later, Ptacek returned from the locker room and went back into the game, appearing to be completely healthy. Her return sparked a quick Prescott scoring run that led to a 12-3 lead in the first set for the Cardinals, forcing an Elk Mound timeout. The timeout did little to slow the Prescott offense. Another burst of points by the Cardinals contributed to their 20-10 lead which forced another Mounders timeout. Prescott scored the next five points to win the first set 25-10.

The second set was the most competitive of the night for Elk Mound. The scoring was deadlocked for nearly the entire set. Throughout the set, the score was various scores including five, eight, 12, and 15. Both teams were putting together extensive volley streaks. When the set was tied 15-15 Prescott gained a bit of momentum and took a 22-17 lead. The five-point lead propelled the Cardinals to a 25-18 victory to take a 2-0 lead in the best-of-five series.

The third set was much less competitive. Prescott began the match on a 15-6 run that was too much for the Mounders to overcome. Despite Elk Mound making a small comeback late in the set, Prescott defeated the Mounders 25-20 to advance to the second round of the playoffs. After the match, Prescott head coach Geoffrey Snyder spoke about the playoff victory.

“It was a lot of fun tonight,” Snyder said after the win. “The fans were excited to be here. We play for ourselves, but the fans are along for the ride. Tonight was a whole team effort. I thought we were looking crisp with our passing, defense and our setters really turned it on tonight. Our offensive side was on fire. It all came together.”

Snyder also spoke about Ptacek and the apparent illness that she had just a couple of points into the first set of the night.

“She wasn’t feeling well and had to get off of the court,” Snyder said. “She got off the court and did her thing. It’s just a lot of nerves, there is a lot of pressure on these players sometimes, especially with a big crowd like that.”

Snyder stated that he was happy with how Ptacek bounced back and quickly returned to her expected level of play. He also spoke about the thenupcoming matchup with top-seeded Saint Croix Central, a team that they played in the first conference game of the year, which was a four-set loss for Prescott.

“We’re excited to go back there and play a good team again,” Snyder said. “We play well against good teams; it’s going to be exciting. We will have a light practice tomorrow. The rotation stays the same. We’ve learned everything that we can. At this point, it’s about me giving them strategy and understanding the other team.”

Despite Prescott’s best efforts in preparation for Saint Croix Central, the Panthers’ high-powered offense was too much for the Cardinals to handle. Going into the game, Saint Croix Central had a 30-5 record for the season which earned them the top seed and home-court advantage.

The first set was the most high-energy set of the night. Both teams played hard and both the home and visiting student sections were making noise for their respective team. Saint Croix Central got out to a 12-6 lead early in the match which forced a Prescott timeout by Snyder. After the first stoppage, Prescott fell behind 178 and desperately needed a scoring run. That’s exactly what happened. Prescott scored five straight points forcing a timeout by the Panthers to stop the momentum. Despite battling back and forth, Saint Croix Central came out on top of the first set with a 25-19 victory.

The second set began with more Prescott energy. The Cardinals went toe-to-toe with Saint Croix Central for the first approximately ten points. The Cardinals had a 9-7 lead in the second set and had momentum. However, the Panthers battled back to tie the set 10-10. That’s when Saint Croix Central took advantage of their experience in a critical playoff moment. The Panthers scored the next nine points to take a 19-10 lead that they eventually turned into a 25-12 victory.

For Prescott, the energy was essentially gone at the start of the third set. The Cardinals were lethargic to start the third set after falling behind 2-0 in the series. Saint Croix Central cruised to a 25-13 victory in the third set to sweep the series 3-0.

It was apparent just how much the Prescott players, especially the seniors, cared about not only this volleyball season but also the teammates and coaching staff for the Cardinals. Players were in tears as they went back to the locker room for the final time this season. After the match, coach Snyder was candid in his expression of the loss at Saint Croix Central.

“Saint Croix Central is the number one team,” Snyder said. “They’ve lost five matches this year out of 35, right, and one of them was because a bunch of players were out sick. They’re a really good team. We had to play 100% in order to compete and we just weren’t there.”

“They’ve come a long way this year, it’s really been fun coaching them,” Synder said. “They feel like my group of seniors because this is my third year in the program. I feel like they’re my athletes. There is just so much trust with them, it’s been a really great year that way. They’re true leaders and we’re going to miss that next year.” 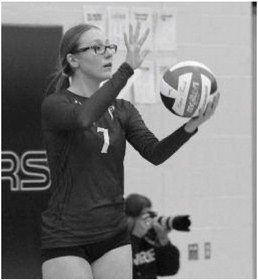 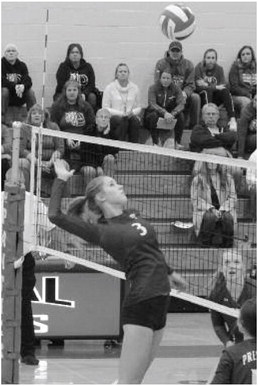