This map shows where East Park Street will be moved to realign with West Park Street. Two homes were demolished in the 600 block of South Main Street to make room for the realignment.Map courtesy of City of River Falls
News
RF City Council approves aldermanic, ward boundaries

Planning & Engineering Technician Tyle Galde gave the council a presentation on redistricting, which happens every 10 years after a census. Redistricting accounts for population changes and the proper representation of voters, Galde said.

Pierce County approved a map with five supervisor districts covering River Falls; four are entirely within in the city and one also covers a part of River Falls Township. By law, the city was required to establish ward boundaries and return its plans to the counties no later than Oct. 18. Aldermanic districts must be completed by Nov. 23. Galde said city staff had four goals during the redistricting process:

•Aldermanic District 1 would no longer be split between two counties;

•All on-campus university students would vote in one location; •Minimize the overlap of aldermanic and supervisory districts;

The wards comprising Aldermanic District 2 represent neighborhoods in the southeast and the university. Ward 10 includes most of the residence halls for UW – River Falls, and is included in one census block: therefore, creating a ward with an inflated population. The state allows population variation of wards, if necessary, to accommodate census block limits, supervisory district boundaries and aldermanic district boundaries.

The area including Woodridge and Southridge moved to Aldermanic District 4 due to population growth in this area, according to census data.

The city council unanimously approved a resolution allowing the River Falls Disc Golf Course community group to use approximately 12 acres known as Sterling Hill for a disc golf course. The course will be adjacent to the Sterling Ponds residential development. The city doesn’t anticipate developing the land anytime soon due to the steep terrain.

In Summer 2019, Andrew Reese, a member of RFDGC, approached the city about possibilities for an 18-hole disc golf course on city property. The city settled on Sterling Hill as the best option. Reese and other volunteers consulted with the Parks & Recreation Advisory Board, which endorsed the project on Sept. 16, 2020.

For the past two years, the group has worked on site preparation by removing debris and brush, including buckthorn. The Department of Natural Resources greenlighted the land use in July, allowing for more formal development to begin.

The RFDGC group plans to raise money for the initial build, estimated to be about $9,000. Volunteers will install tee pads, baskets and trails, with a soft opening planned in Fall 2022. Once the course opens to the public, the city will provide garbage and recycling containers and a portable restroom. Parking will be allowed along Old Jersey Road with access granted from Huppert Street. The project will be funded completely by grants or donations.

The group also plans to potentially organize into a more formal group to sustain the course’s care and maintenance.

The council approved a set of resolutions related to the proposed senior living development called The Sycamore, slated to be built in the 700 block of South Main Street.

•Resolution approving the Certified Survey Map for The Sycamore of River Falls Senior Housing Development City staff has been working with Matt Frisbie since Summer 2020 on a redevelopment project which includes an 84unit senior and independent living facility with assisted living and memory care. In addition, four 55-plus independent living patio townhomes will be built at 706 Sycamore St.

As part of a negotiated part of the new Tax Increment District, East Park Street will be realigned to intersect with West Park Street. To do this, Frisbie bought the two homes at 660 and 684 S. Main St. and demolished them; the city agreed to buy the two properties within 90 days of the demolitions. The agreed upon price was $500,000, taken from the General Reserve Fund, will be reimbursed from TID 18 at a later date.

East Park Street will be located on part of those two properties and the portions of the lots not used will be deeded back to River Falls QOZB LLC.

The Marzolf Company, Inc. will purchase four acres of land from the city at 265 Mound View Road for $280,000. The land is located in the River Falls Industrial Park.

The city purchased the whole property (totaling 7 acres) from Johnson Kellogg Properties LLC in 2018 for $420,000. At that time the city identified the property as a possibility for a combined public safety facility. However, the police department has moved into the former RiverTown building at 2815 Prairie Drive, and a location near Hoffman Park has been identified as a possible spot for a future fire station.

The Marzolf Company, Inc. manufactures MARZOLF flanges and backing rings for the fluid process industries. It’s currently located in the town of River Falls off County Road W. The company wants to expand its light industrial manufacturing facility by building a 10,000- to 15,000square-foot building within the next two years and moving into the city will allow more production space and faster, more reliable internet. The company currently employs eight people, but would like to expand.

•The council adopted a resolution appointing Tracy Biederman as interim city treasurer, effective Oct. 12, 2021. Sarah Karlsson recently resigned from the position, leaving it and the finance director position vacant. The treasurer’s duties include managing investments, banking, property tax roll and collections. The city hired Biederman on Sept. 12, 2011 as an accountant and promoted her in February 2021 to accounting manager/deputy treasurer.

•The council adopted a resolution approving the land use agreement between the Kinnickinnic River Land Trust and the city. KRLT purchased 40 acres in the lower Kinnickinnic River canyon downstream from the city, which contains 1,500 feet of river frontage and the mouth of the Rocky Branch. The purchase connects the River Falls School Forest to Glen Park and River Hills Park. This parcel is now known as the Community Forest.

•The council approved a resolution authorizing city to staff to apply for the Wisconsin DNR Urban Forestry Grant, which provides 50% reimbursement for expenses related to emerald ash borer mitigation in 2022. The maximum grant award is $25,000.

•The council adopted a resolution authorizing a license agreement with Bret Vanblaircom of Bret Vanblaircom and Artisan Builders for a portion of the land at 707 St. Croix St. The city owns the vacant lot at this location and will provide access for future infrastructure work. Vanblaircom, the current tenant at 709 St. Croix St., would like to place a large storage container and utility trailer on the northeast corner of the lot. In exchange, Vanblaircom will perform weed control and snow removal on the city lot. The agreement is on a month-to-month basis. 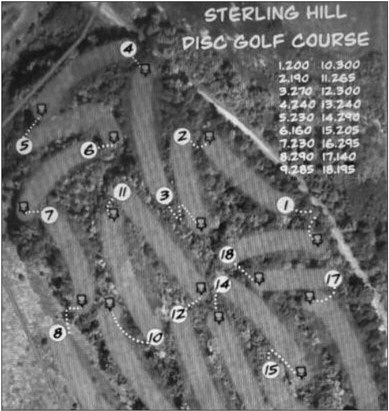 The new Sterling Hill Disc Golf Course, adjacent to the Sterling Ponds neighborhood, will be built on 12 acres of steep terrain. A volunteer group has been busy clearing trails and readying the land for the course. Map courtesy of City of River Falls