Senior outside hitter Haley Graetz for the RFHS volleyball team jumps as she goes up for a kill against New Richmond in the Regional Final game on Saturday. Graetz is one of many impactful seniors on the 2021 RFHS volleyball roster.Photo by Reagan Hoverman
News
RFHS volleyball wins Regional Championship

The River Falls volleyball program has established a record of excellence throughout the last six years that few in the state of Wisconsin can rival. River Falls has won five consecutive conference championships and with it, has received a home-court advantage.

Because River Falls earned a #1 seed this season, they had a first-round bye. Other teams played on Thursday, Oct. 21, including the New Richmond Tigers who faced off against Eau Claire North. New Richmond won in four sets to advance to play on the road against River Falls in the Regional Final game. It wasn’t the first meeting between the two teams. On Thursday, Sept. 9, River Falls traveled to New Richmond for a Big Rivers Conference matchup. River Falls made quick work of the Tigers, winning in three sets, half of which were played by substitutes to keep the score respectable.

On Saturday night at River Falls High School, very few substitutes saw the floor. The regular varsity squad played nearly the entire match. In the past, River Falls head coach Sara Kealy stated that when the playoffs begin, the rotation shrinks, and the team plays starters until the game is finished.

River Falls jumped out to a 6-2 lead early in the first set against the Tigers. The scoring continued throughout the first set. Another scoring run by the Wildcats led to an 18-8 lead which forced a New Richmond timeout. A few minutes later Kealy’s squad finished the first set with a 25-14 victory to take a 1-0 lead in the series.

The second set was the most adversity that River Falls faced the entire night. New Richmond got out to a 6-2 lead and at one point led 12-9 midway through the second set. River Falls battled back to take a 13-12 lead that caused an- other New Richmond timeout. The Wildcats stole the momentum and never gave it back. The student section got loud and helped propel River Falls to a 25-17 win to take a 2-0 series lead over the Tigers.

The third set was more River Falls dominance. The Wildcats got out to a quick 6-1 lead which forced a New Richmond timeout. The Tigers were able to put a small scoring run together to make the River Falls lead 9-7. However, the Wildcats pulled away for the 25-14 victory in the third set to win the series 3-0.

It’s safe to say that River Falls was expecting a quick night. The Wildcats lost only a handful of matches all season, most of them against some of the top-ranked teams in the state. In addition to already beating New Richmond earlier this season, the Tigers were a #9 seed going into the playoffs and had a team record of 14-15 entering the game.

After the match, head coach Kealy spoke about the match and some things that she wants her team to fine-tune before sectionals.

“We worked a lot on serving this week,” Kealy said. “I’m trying to get the girls to be more aggressive and be less afraid to make mistakes because in most of our conference matches, we’re 2:1 ace-to-error ratio, which is pretty good. That was the focus this week. Starting to apply what we’re doing in practice against live teams.”

Kealy is working to get her squad prepared for some of the better competition that they will face the further they make it into the playoffs. Serving has been the focus of late. She is also working on keeping her team locked in, especially against teams that they’ve already defeated this season like New Richmond.

“I think that they know they need to build momentum because it’s playoff time,” Kealy said after the win. “The fact that the seven starters played together pretty much the whole match allows them to build some confidence because in most of our matches throughout the season, they would play the first set, half of the second set, and then we would start rolling subs.”

While most of the regular varsity players will be getting more time as the playoffs roll on, one starter, Brianna Brathol, won’t be. In the final game of the regular season against Chippewa Falls, Brathol injured her hand during the game. She was taped up and tried to return to action but quickly realized she couldn’t do it. She was in street clothes for the first playoff game against New Richmond. Coach Kealy spoke about Brathol’s injury.

“It’s totally broken in two spots on her hand and she’s going to be out six weeks, so she’s done for the year,” Kealy said. “She was my best offensive outside, she also served and received for me. She’s a great server.”

Kealy spoke about the loss of Brathol for the season and how it will impact the roster moving forward as they hope to make another run toward a state championship.

“We have Haley (Graetz) who played outside last year and is now a middle,” Kealy said. “I’ve put her in Brianna’s outside spot and I’ve put Brynn (Johnson) in a middle spot and we’re running a three middle. Just getting Haley to a familiar spot and getting her confidence up. She’s getting there.”

That site was predetermined and is technically considered a neutral site game, even though River Falls could potentially be playing against Chippewa Falls at Chippewa Falls in the sectional final.

First, River Falls will have to get past the aforementioned D.C. Everest team on Thursday, Oct. 28. That match is slated to begin at 7 p.m. 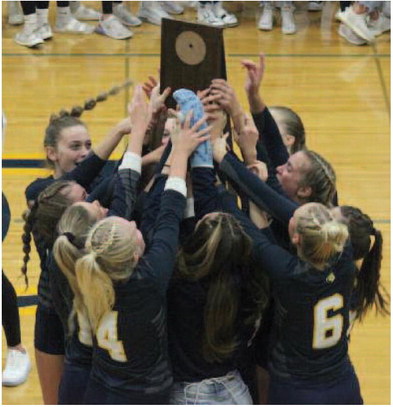 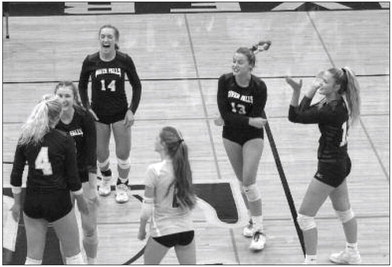 The River Falls volleyball team celebrates a point as they began closing in on winning the third set against New Richmond on Saturday night. Photo by Reagan Hoverman