On Friday, Oct. 22, the River Falls High School Wildcats defeated La Crosse Central 29-6 in the first round of the WIAA playoffs in front of a nearly full-capacity home crowd. The victory advances RFHS to the Regional Final game on Friday, Oct. 29, which is on the road against the undefeated #1 seed Waunakee Warriors.

The Friday night rematch had far fewer fireworks than the previous meeting, but the result was still the same. The 29-6 victory for River Falls had a scoreless first quarter. Both teams were feeling out each other’s game plans and penalties and turnovers contributed to the scoreless first 12 minutes of action.

River Falls broke the game open on the ensuing kick return when junior wide receiver Jordan Karras took the kickoff 85 yards to the house to give River Falls a 7-6 lead. With 90 seconds remaining in the first half, La Crosse Central fumbled on 4th and 6 at the La Crosse Central 41-yard line. In the remaining 90 seconds, River Falls dominated the line of scrimmage and capped the drive off with a rushing touchdown by senior running back Tyler Haydon.

After the touchdown, River Falls sent out the special teams unit for the PAT. The snap was botched, and the Wildcats couldn’t get the extra point off in time. Instead, senior tight end Ethan Campbell recovered the ball and started to scramble toward the endzone. After making a few Riverhawks defenders miss, he dove into the endzone for a successful – and accidental – two-point conversion to give River Falls a 15-6 lead going into the half. Just like the first quarter, the third quarter was also scoreless and the River Falls 15-6 lead was held to begin the fourth quarter. The Wildcats drove down the field and capped off the drive with another Haydon rushing touchdown. The score gave RFHS a 22-6 lead and was Haydon’s second score of the game.

The Wildcats’ defense produced another stop and got the ball back to the offense with 2:48 left in the game with a 16point lead. The River Falls offense wasn’t done doing damage. The aforementioned Haydon took off for a 62-yard gain on the ground. He was tackled at the La Crosse 12- yard line. River Falls eventually punched in a two-yard TD run by senior running back Cole Evavold to give RFHS a 29-6 win. After the game, head coach Ryan Scherz spoke about the win.

“La Crosse Central came out doing some different things we hadn’t seen them do before and they played super hard,” Scherz said. “It’s a credit to them to get their kids to play that hard. The kickoff return changed everything; it changed the momentum.”

Going into the game, La Crosse Central was scoring over 30 points per game on average. The River Falls defense locked down an explosive group for the better part of 48 minutes. Scherz spoke about his defense.

“The defense played phenomenal though, the whole game,” Scherz said. “It gave us time to get our feet under us on offense and do what we normally do.”

The River Falls offense has been versatile the whole season. In some games, senior quarterback Vito Massa passes for 300 yards and five touchdowns, and in other games, the running backs like Evavold and Haydon get the job done on the ground. The offensive line dominated the line of scrimmage tonight and that showed in the box score. River Falls had over 215 rushing yards.

“The offensive line is the beating heart and the core of our team,” Scherz said. “They never have a bad day and they never have a bad game. When you can lean on that, you’re in a pretty good spot as an offense. You just need to be patient and let it work.”

Scherz also spoke about the defense he has and what kind of talent he has not only on the field but also on the coaching staff.

“The defense is always super prepared and as always, they played well,” Scherz said. “We have the best defensive coordinator in the state in Paul Haskins and he put together a great plan. That’s the kind of performance we expect every week from them, and I know that’s their expectation.”

On Friday, Oct. 29, River Falls will travel to the #1 seed Waunakee Warriors for the WIAA Division 2 Regional Final game. Waunakee is 10-0 this season, which included a 7-0 record in Badger-Large Conference play, as well as a conference championship. The winner of that game will face the winner of DeForest and Menomonie on Friday, Nov. 5 in the first round of sectionals.

The game between River Falls and Waunakee on Friday night is slated to begin at 7 p.m. in Waunakee. 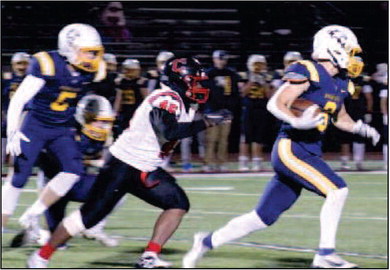 RFHS wide receiver Jordan Karras showing off his speed in the open field during his 85-yard kick return touchdown against La Crosse Central on Friday night. Karras’ special teams play sparked the RFHS offense which led to a blowout win against the Riverhawks. Photo by Reagan Hoverman 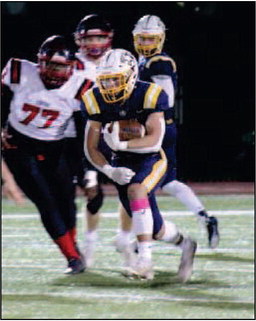 Senior running back for the River Falls Wildcats Cole Evavold carries the ball during the game against La Crosse Central. Evavold finished the night with 13 carries for 58 yards and a touchdown. Photo by Reagan Hoverman