UWRF senior running back Anthony Silva stiff arms a Whitewater defender as he moves past the line of scrimmage. Silva and the UWRFoffense competed against one of the best defensive fronts on the country on Saturday, Oct. 23, in the 34-28 loss at home. Photo by Reagan Hoverman
News
UWRF football loses heartbreaker to #3 UW-Whitewater

The University of Wisconsin- River Falls football team hosted the nationally ranked #3 UW-Whitewater Warhawks on Saturday, Oct. 23, a matchup that UWRF lost 3428 and came down to the final possession of the game.

The UWRF Falcons quickly fell behind 14-0 in the first quarter after Whitewater scored on two passing touchdowns in approximately five minutes of game time. When facing one of the best teams in the country, most schools would roll over and admit defeat after trailing by multiple scores. The Falcons did quite the contrary.

On the first play of the second quarter, UWRF scored on a six-yard touchdown pass from senior quarterback Kole Hinrichsen to junior wide receiver Andy Groebner to cut the Whitewater lead 14-7. Five minutes later on first at 10, UWRF scored on a 21-yard screen play to senior running back Anthony Silva to tie the game 14-14.

After a successful stop by the River Falls defense, the UWRF offense had the ball back and minutes later found itself in a 4th and 2 at the River Falls 39-yard line. Hinrichsen took a QB keeper 42 yards for River Falls first down. Then, with 2:43 remaining in the first half, UWRF scored on a 23-yard touchdown pass on 4th and 6. The score was a Hinrichsen to Charlie Huschka connection that gave the Falcons a 21-14 lead going into the half.

Whitewater got the ball to start the second half and wasted no time demonstrating why the Warhawks are a topthree program in the country for Division 3 football. With 10 minutes to go in the third quarter Whitewater scored on a 25-yard touchdown pass to tie the game 21-21. Eight minutes later Whitewater scored again to take a 28-21 lead.

The star of the third quarter was the Whitewater defense, which held UWRF to zero points in the first 15 minutes of the second half and battled to turn a seven-point halftime deficit into a seven-point lead going to the fourth quarter.

With nearly six minutes remaining in the fourth quarter, Whitewater had possession and a seven-point lead. The hometown UWRF crowd was quiet and the Falcons had no momentum. That’s when UWRF freshman defensive back Aaron Borgerding jumped a route and picked off senior Whitewater quarterback Max Meylor and returned it to the Whitewater 24-yard line.

On the next play from scrimmage, UWRF scored on a 24-yard touchdown pass from Hinrichsen to Groebner to tie the game 28-28. Whitewater subsequently marched down the field, but the drive stalled out when the River Falls defense held the Warhawks to a field goal. Whitewater took a 31-28 lead and UWRF was set to receive the kick with a chance to drive down the field to win.

However, the kickoff was fumbled, and Whitewater recovered with only a couple of minutes left to play. The UWRF defense again stepped up and held Whitewater to a field goal, giving the Falcon offense a chance to get the ball back with a chance to win. Trailing 34-28, the UWRF offense took the field. On the first play, Hinrichsen threw a pass down the sideline that was picked off, essentially ending the game. Whitewater ran the clock out for the 34-28 victory.

After the game, UWRF head coach Matt Walker gathered his team near the south endzone and told his team how proud he is of their effort against one of the best programs in the country. In the postgame interview, coach Walker provided his thoughts on the game.

“You’re proud of the effort and you proved that you can play with anybody, but you’re also upset that you have a chance to win it (and don’t),” Walker said after the game. “Give them a lot of credit. It’s not a moral victory game, but at the same time, I’m really proud of our defense. We got put in bad situations all day and they kept fighting and gave us a chance to win time after time.”

“I think it proves that we can beat anybody in the country, but it won’t happen if we don’t get back to work,” Walker said. “I would say not even in the league (WIAC), it sends a message nationwide. Even in 2019, we played them as close as anybody until the national title game. I think it will send a message of respect across the country, not just in the league.”

When reflecting on why UWRF couldn’t find a way to win this close game, he stated that the running game was an issue and there was a reliance on big plays instead of consistent offense.

“We clearly didn’t run it as well,” Walker said. “We relied on some big plays more than we had and you look at when we got hot there at the end of the first half, we got some big runs and chunk yardage. Luke Fugate went down and didn’t get back in the game, which hurts us. He’s a great running back.”

Walker explained that the offense isn’t designed to be an air raid scheme. The offense is mostly reliant on a strong run game, screen passes, and consistent, methodical offensive possessions. In the game against Whitewater, the offense was forced to pass more than he would have liked.

“Every yard was hard today and it’s just not us to be forced to throw it,” Walker said. “We throw it efficiently and we are good enough to make big plays downfield, but it’s really not our game to be behind the sticks having to throw it around.”

Despite a tough loss against Whitewater, River Falls is still 5-2 this season and is having its best season in at least a dozen years. Coach Walker talked about the impact that the great start has had on the program, especially recruiting.

The next game for the Falcons is at home on Saturday, Oct. 30, against the University of Wisconsin-Platteville. That game is slated to kick off at 1 p.m. 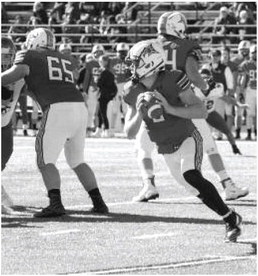 Senior quarterback Kole Hinrichsen of the UWRF football team rolls out of the pocket and scans down the field for an open receiver early in the home game against theUW-Whitewater Warhawks. Photo by Reagan Hoverman