The cast of Cinderella onstage during a dress rehearsal Saturday, Oct. 30 at Ellsworth High School. Photo courtesy of Katie Traynor
News
Cinderella: A show you don’t want to miss

ELLSWORTH – After the heartbreak of a pandemic year, get ready for a showstopping performance as Ellsworth High School drama students present Rodgers and Hammerstein’s Cinderella. A well-loved, beloved musical, Cinderella will come to life starting this weekend in the EHS cafetorium.

Director Katie Traynor and the cast and crew began preparations for the show this summer. The cast and pit band started rehearsing together at the end of August.

“A lot of the students did a tremendous amount of work earlier on this summer though, reading the script and choreographing dance numbers in June and July,” Traynor said.

After 2020 turned into such a strange year, Traynor and the students are thrilled to be rehearsing as normally as they have been.

“My heart just broke for the kids in our attempted production last year, who put so much time and effort and struggled against so many obstacles for so little reward,” Traynor said. “This year’s students who are in the cast, pit and crew had so much renewed energy for this show and the rehearsals. They’ve worked incredibly hard and I can’t wait for them to be able to showcase their talents this week.”

When it came to picking a production to perform, Traynor brainstormed with Karen Kornmann (EHS choir director) and Nick Junker (EHS band teacher). They wanted a family friendly show that would appeal to many, to draw a large crowd in front of which the students could showcase their talents.

“I thought the story of Rodgers and Hammerstein’s Cinderella, an underdog who overcomes obstacles to reach her dreams, would resonate with our actors and audience after the challenges of last year,” Traynor said. “I think anyone looking for an upbeat, funny and optimistic message will enjoy the show this cast has put together.”

Each show has its usual challenges, such as keeping everyone healthy, learning lines and rehearsal schedules stress. But sometimes the difficulties are also the most rewarding, Traynor said. With a young and inexperienced group, they’ve pulled together and supported one another even more.

“I am so proud of the talent, hard work and incredible support this group has provided for each other,” Traynor said. “It’s honestly been a joy to work with them and see them grow together.”

Cinderella is a classic tale about a young woman who lives with her evil stepmother and wicked stepsisters. The women force her to work nonstop and keep her from social functions. However, when Cinderella attends the royal ball, with help from her magical fairy godmother, she wins Prince Charming’s heart. It’s a story of kindness, forgiveness and romance that plays out through beautiful music and choreography.

“There is so much to look for in this performance!” Traynor said. “The costumes are breathtaking, the cast and band have incredibly talented young performers to showcase and the choreography and large group numbers look fantastic. It’s truly a show you don’t want to miss.” 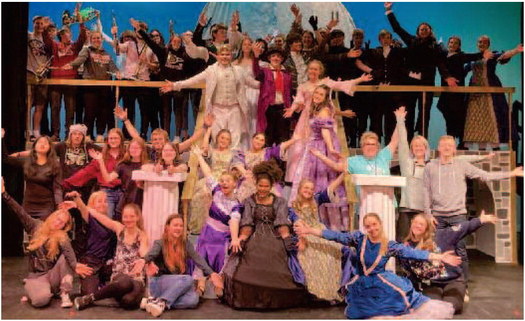 The cast and crew of Ellsworth High School’s production of Rodgers and Hammerstein’s Cinderella have devoted hours of practice to deliver a showstopping performance for the whole family. The first show is Nov. 4.Photo courtesy of Katie Traynor