The Ellsworth Panthers continued to roll through the WIAA Division 4 playoff bracket on Friday, Oct. 29, when they hosted the visiting Osceola Chieftains in a sectional quarter-final game that culminated in a 46-21 victory for the Panthers, sending the team to a sectional semifinal matchup on Friday, Nov. 5.

Throughout the 2021 season, the Ellsworth Panthers have only trailed at any point in a game a handful of times or less; it just doesn’t happen. However, on Friday night, the Panthers came out flat against Osceola in the home playoff game. Osceola kick returner Garrett Slater received the opening kickoff and returned it for an 81-yard special teams’ touchdown to start the game.

The 10-second Osceola possession that resulted in a touchdown quickly silenced the Ellsworth home crowd. When the Panthers’ offense finally hit the field, they were slow to start as well. After one first down, the drive stalled out deep in their territory on fourth and long. The Panthers punted and Osceola subsequently marched down the field and scored another touchdown. Osceola running back Lucas Sedivy scored on a 40-yard touchdown run to give the Chieftains a 14-0 lead with 4:36 remaining in the first quarter. After the game, Ellsworth head coach Rob Heller spoke about the slow start and falling behind early.

“That’s what is going to happen in the playoffs, they’re a well-coached team,” Heller said. “They are a quality program with a lot of success and a lot of tradition in that program over there. They came out and socked us in the mouth. We had one of our flatter weeks of practice that we’ve had all year. That’s going to happen once in a while.”

When Ellsworth took to the field phrases could be heard being shouted at the players by the coaching staff including “Wake up!” and “Let’s go!” That’s exactly what the Ellsworth offense did. The Panthers’ offense didn’t even get a chance to hit the field. Instead, senior wide receiver Ashten Quade took the ensuing kick return 80 yards for a touchdown which was followed by a successful twopoint conversion to make the score 14-8 in favor of Osceola.

Midway through the second quarter Ellsworth got the ball back, drove down the field, and capped off the drive with an eight-yard touchdown run by senior quarterback Jack Janke. Another successful two-point conversion gave Ellsworth a 16-14 lead. The well-oiled offensive power of Ellsworth wasn’t done scoring. With 36 seconds remaining in the first half, Janke scored on a oneyard touchdown run that capped off another strong Panthers possession, giving Ellsworth a 24-14 lead.

When the scoring barrage finally ended with eight minutes to go in the fourth quarter, which was a seven-yard touchdown run by junior Bo Hines, Ellsworth had scored 46 unanswered points after falling behind 14-0 early in the game.

The explosive offensive output is something that the Panthers have demonstrated all season. There is no deficit too large for Ellsworth to come back from, especially when it happens in the first quarter. Osceola scored a touchdown in garbage time to make the final score 46-21 in favor of the Ellsworth Panthers.

“I’m happy with how the guys responded after being down 14-0,” Heller said. “I talk about it every week, that (Ellsworth) offense is just a machine. Once that thing gets clicking and our guys realized it was a level two playoff game, they responded exceptionally well and were able to pull out a win.”

Earlier this season Ellsworth traveled to Osceola in what was the most anticipated Middle Border Conference matchup of the season. In that game, Ellsworth again trailed early but turned it around in the second half. It was a 36-26 victory for the Panthers but was significantly more competitive than the playoff game on Friday night. Coach Heller explained why that game was close and the playoff game wasn’t.

“We didn’t play our best game up there the first time around, and that’s a credit to their guys for playing us tough,” Heller said. “When we’re able to come back and score 46 unanswered points, that’s the type of team that we have. Those are the types of athletes that other teams have to deal with, and I couldn’t be prouder of the way these guys responded tonight. That says a lot about the experience on this team and a lot about their goals.”

The blowout victory is becoming a standard win for this Ellsworth Panthers football team. However, their toughest test yet will be on the road next week against Northwestern. Ellsworth was given the #2 seed and Northwestern got the #1 seed, therefore, the game against Osceola was the final home game of the season for the Panthers.

Ellsworth travels to Northwestern High School on Friday, Nov. 5, in the sectional semi-final game. That game is slated to begin at 7 p.m. 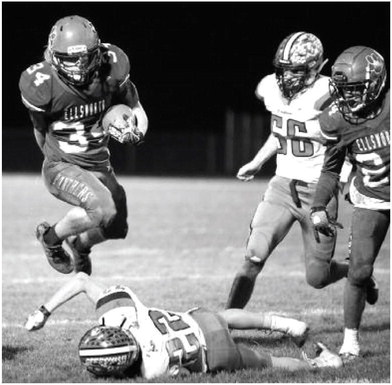 Ellsworth senior wide receiver Ashten Quade leaps over Osceola defenders on his way to the endzone. Quade and the Ellsworth offense scored 46 unanswered points on Friday against Osceola. Photo by Gaylen Bicking