Pair were racing at speeds over 100 mph before April accident

BURNSVILLE, Minn. Dakota County Attorney Kathy Keena announced Monday, Nov. 1 that_Camille Dennis- Bond, age 19, of Burnsville,_ Minn. has been charged with two counts of murder in the third degree (perpetrating eminently dangerous act and evincing depraved mind), two counts of criminal vehicular homicide (gross negligence) and one count of criminal vehicular operation resulting in great bodily harm (gross negligence), in connection with the fatal crash on County Road 42 in Burnsville on April 4, 2021 that killed 22-year-old Tayler Nicole Garza of Woodbury, Minn. and 22-year-old Dalton Lee Ford, of Burnsville, Minn. Dennis-Bond made her first appearance Nov. 1 in Dakota County District Court._ A summary of the allegations contained in the criminal complaint is set forth below:_ On April 4, 2021, around 10:30 a.m., a white Chrysler 200, driven by a juvenile male identified as L.B. was traveling eastbound on County Road 42 between Burnsville Parkway and Newton Avenue in Burnsville, at a high rate of speed side-byside (i.e., drag racing) with a Chevy Malibu driven by his sister, Camille Dennis-Bond (Dennis-Bond). There was one front seat passenger in the vehicle driven by L.B. who was later identified as his sister C.M.B. There was one front seat passenger in the vehicle driven by Dennis-Bond who was later identified as L.H._ As L.B. and Dennis-Bond approached Newton Avenue, a Honda-CRV pulled into the left turn lane of westbound County Road 42 to cross onto Newton Avenue. The driver of the Honda was Dalton Ford and the front seat passenger was Tayler Garza. As Ford proceeded to cross County Road 42, L.B. T-boned the Honda causing it to split in half. Dennis-Bond's vehicle, which was travelling in the left lane and slightly behind the vehicle driven by L.B., just missed striking the Honda. Both Ford and Garza died at the scene as a result of the injuries they suffered in the crash. Both L.B. and C.M.B. were transported to the hospital by ambulance. C.M.B. suffered significant injuries as a result of the crash and initially, police were informed she may not survive and would require significant future medical care._ Several witnesses to the crash described that the vehicles driven by L.B. and Dennis-Bond were “racing' or travelling at a high rate of speed just prior to the crash. One witness said the white vehicle (L.B.'s vehicle) was driving “incredibly fast' and hit another car (Honda) that “basically turned into powder and split in half.' Another witness estimated the two cars passed him going approximately 100 mph._This witness believed they were “racing,' or that it may have been “road rage.' He described their speed as “crazy' and commented it was “bizarre' how fast they were going. He opined there was no way the cars could have stopped for someone in the way.

The Minnesota State Patrol conducted crash reconstruction and in its report, issued on Sept. 29, 2021, noted that L.B.'s vehicle had significant front-end damage; the Honda was split in half between the B and C pillars (pillars separating the front and back seat sections of the vehicle). The posted speed limit in the area of the crash was_50 mph. The crash reconstruction report concluded that the speed of L.B.'s vehicle was between 93 and 100 mph at point of impact with the Honda. It was determined that five seconds prior to the crash, the speed of L.B.'s vehicle was 114 mph. Dennis-Bond and L.B. travelled at speeds of 41 to 64 mph over the posted speed limit. Additionally, the primary contributing factor for the crash was the excessive speed of L.B.'s vehicle travelling prior to, and at the point of impact_with the Honda._The secondary contributing factor was Dennis-Bond's vehicle and its matching speed (“racing') with L.B.; and the Honda turning left into the path of the Chrysler.

Bail was set in the amount of $300,000 without conditions ($75,000 with conditions) by Dakota County District Court Judge Kathryn Messerich. Dennis-Bond's next court appearance is scheduled for 9 a.m. Nov. 24, 2021 in Hastings.__ “My deepest sympathy is extended to the family and friends of Tayler Garza and Dalton Ford for their great loss,” Keena said. “This case serves as a somber reminder of the danger of driving at excessively high speeds. As of Oct. 24, 2021, there have been 402 traffic-related deaths on Minnesota roadways, which represents a 25% increase over last year at this time. Speed is the largest contributing factor in these fatal traffic crashes. Of the 402 traffic-related deaths, 130 of those have been speed related deaths which is a 33% increase from this time last year and a 106% increase from this time in 2019.'

Keena added: “A delinquency petition and a petition for adult certification has also been filed against 18-year-old_ Leon Bond_(who is referred to as L.B.) charging* him with the same offenses as contained in the complaint against Camille Dennis-Bond. Leon Bond was 17-years-old at the time of the offense, so Minnesota law required that he be prosecuted as a juvenile unless the court certifies him as an adult.'__ Keena thanked the Burnsville Police Department for their thorough investigation into this deadly crash. Keena also thanked the Minnesota State Patrol for the crash reconstruction. _____ 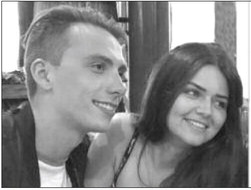 Charges have been filed in Dakota County, Minn., in the deaths of Dylan Ford and Taylor Garza. Photo courtesy of O’Connell Funeral Home.