There was a collective cheer and almost simultaneous sigh of relief from the approximately 150 RFHS volleyball fans moments after senior Dani Lien scored the 15th and final point of the fifth set of the sectional final match on the road against Chippewa Falls on Saturday, Oct. 30.

With the win on Saturday night against the Chippewa Falls Cardinals, River Falls punched a ticket to the state tournament in Green Bay which will begin on Thursday, Nov. 4 at 1 p.m. against Brookfield Central.

Despite making it to state, the road to get back to Green Bay wasn’t as easy as it has been in years past for RFHS head coach Sara Kealy’s program. The Wildcats quickly dismantled D.C. Everest in the sectional semi-final in three sets on Thursday, Oct. 28. However, the sectional final against Chi-Hi was a different story River Falls earned the #1 seed for the bracket and Chi-Hi earned the #2 seed. The sectional final was supposed to be at a neutral site, meaning neither team would have a home-court advantage. The neutral site was a predetermined location and was given to Chippewa Falls High School before the playoffs began. That meant #1 River Falls had to travel to #2 Chi-Hi to play the Cardinals in their gym because of how the bracket turned out. River Falls had to travel to a hostile playoff crowd environment for the first time in years.

In the Wildcats’ previous five sets against Chi-Hi this season, RFHS was 5-0. That changed on Saturday night when the Wildcats and the Cardinals went into a five-set grudge match in the sectional final. The first set was highly contested, and the players, coaches and fans of each team were as fired up as they’ve been all season in an opening set. In the first several minutes of the match, there were three lead changes. Chippewa Falls scored the first point of the game which was followed by three unanswered points by River Falls. The Wildcats’ either maintained their lead or were tied throughout the remainder of the first set. Both teams went on small scoring runs but, in the end, River Falls prevailed 2522 to take a 1-0 series lead. After the game, head coach Kealy spoke about the deafening Chi-Hi crowd in what was essentially a home playoff game for the #2 seed.

“I think it’s huge, for a team that is young and doesn’t have (postseason) experience, to be in your home gym makes you feel more comfortable,” Kealy said. “It can be something as little as having the home team get choice of bench. Well, I’m the home team because I’m second alphabetically, or else I would have taken their bench to make them uncomfortable. It leveled the playing field enough to allow them to feel more comfortable like they can compete.”

The second set was when River Falls began facing adversity. Already in a hostile crowd, River Falls was trailing 14-9 more than halfway through the second set. Frustrations began to grow on the RFHS bench, particularly from Kealy, who was frustrated with some of the officiating that was happening. The frustration eventually boiled over, as Kealy received a yellow card warning for her frustrations with the officials. After the game, junior Morgan Kealy spoke about Sara Kealy getting a yellow card and what it did for the team’s morale.

“When she got a yellow card, we were like, ‘Alright, let’s go! She’s in it to win it and we are too,” Morgan Kealy said. “Coming out of sets and timeouts we tried to stay positive. Our coach tells us what we need to do but does it in a positive manner. We bring that into the game with us.”

The yellow card given to Sara Kealy surely fired up the team, but it didn’t impact the outcome of the second set. The Cardinals won 25-22 to even the series 1-1 going to the third set. The third set was dominated by River Falls. The Wildcats looked like they had finally reached peak form and put together a 25-18 third set victory to take a 2-1 series lead.

The Chi-Hi Cardinals, fueled by a rocking home crowd, battled through the fourth set. While trailing 15-11, Chi-Hi sophomore outside hitter Paige Steinmetz strung together four straight aces to tie the set 15-15. That was the turning point in the set. River Falls couldn’t overcome the scoring run by Steinmetz, which propelled Chi-Hi to a 25-22 victory to force a fifth and final set to decide the sectional champion. Morgan Kealy spoke about the pressure of going to a winner-take-all set in a sectional final.

“Our first home game of the season we went five sets with Stillwater, and we haven’t lost at home in like 70 games, so that was nerve-racking, but this was a different level,” Morgan Kealy said. “People were saying how these are similar, they aren’t. This is season over, game to go to state, lots of nerves.”

The fifth set featured a River Falls scoring barrage to start that set the tone for the rest of the match. River Falls jumped out to a 9-3 lead in a race to 15 points. Chi-Hi battled back, but the deficit was too much to overcome. River Falls survived in a 15-12 fifth set victory to win the series 3-2, become sectional champions, and advance to state. Morgan Kealy spoke about that pivotal fifth set.

“We came out and hammered the ball,” Morgan Kealy said. “I’m a junior, but I was talking with my seniors and I was telling them, ‘This is not over yet. We are not done.’ They went up and had a show.”

The play of seniors Haley Graetz, Brynn Johnson and Dani Lien was the difference-maker in the fifth set against Chi-Hi. After the match, Sara Kealy spoke about the one other time this season that RFHS went to a fifth set, which was early in the season against Stillwater. In that match, RFHS fell behind 0-2 in the series but battled back to win in five. Sara Kealy said she saw something in this team that night that other teams in her past haven’t had.

“Stillwater at the beginning of the season, I thought to myself, ‘Well, we’ve had a really nice home streak, tonight might be the night,’” Sara Kealy said. “But the girls just keep competing and I knew then that they were a little different from teams I’ve had in the past that were used to being in control. These kids can just regroup. That was a little closer than I would have wanted, but I’m not surprised. Chippewa (Falls) is good.”

With the win, River Falls advances to another state tournament. Although it’s not the first for many of these players, Sara Kealy said this sectional title means as much to them as any title they’ve ever won.

“It does feel good, this year hasn’t been smooth sailing,” Kealy said. “We’ve had some bumps in the road, we’ve faced some adversity that we’ve had to overcome, and I think that has tightened the bond for all of these kids and I think that they appreciate this one more than they have in the past because the competition level was good, and they had to earn it.”

Earn it they did. River Falls will travel to Green Bay on Wednesday night and will play on Thursday, Nov. 1, at 1 p.m. against Brookfield Central at the Resch Center in Green Bay. 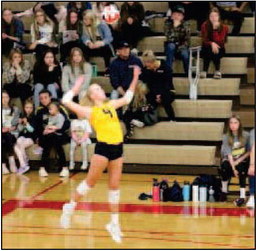 RFHS senior Haley Graetz serves during the Wildcats’ sectional final game against Chippewa Falls on Saturday, Oct. 30. Graetz and the rest of the Wildcats defeated Chi-Hi in a five-set thriller to advance to state. Photo by Reagan Hoverman

After winning the sectional championship, the RFHS volleyball team and coaching staff celebrated with the Division One Sectional Champion plaque. Photo by Reagan Hoverman