RFHS senior midfielder Miles Longsdorf gets ahead of the ball to control it and stop it before it goes out of bounds. Longsdorf and theWildcats scored two goals in the last three minutes of play in the sectional semi-final against La Crosse Central. Photo by Reagan Hoverman
News, Sports
Wildcat boys soccer wins sectional gold

The River Falls High School boys soccer team continued its magical postseason run when the Wildcats defeated La Crosse Central in the sectional semi-final 2-0 and then won the sectional title on the road against the #1 seed Pulaski in a 1-0 game on Saturday, Oct. 30.

For the first time since the 2015 season, the RFHS boys soccer team is going to state. Under the direction of first-year head coach Jacob Langer, River Falls has earned its second boys soccer state appearance in school history.

The road to the state tournament berth began on Tuesday, Oct. 19, at home against Holmen in the first round of the playoffs. The #3 seed RFHS Wildcats took care of business against #6 Holmen without much adversity, defeating Holmen 6-2 to advance to the regional championship.

On Saturday, Oct. 23, River Falls defeated the #2 seed Onalaska 1-0. The victory secured a regional championship for River Falls, as well as a sectional appearance. Sectionals for the Wildcats consisted of two close games. The aforementioned home game against La Crosse Central in the sectional semi-final came down to the wire.

Both teams fielded strong rosters in tough conditions. On the night of the sectional semi-final in River Falls, it was raining and sleeting most of the time and the temperature was in the low 40s. During the first 45 minutes of action, both teams had multiple good scoring opportunities that weren’t converted. Going into halftime, River Falls and La Crosse Central were tied 0-0.

Again, in the 16th minute, River Falls had another premium scoring opportunity when junior forward Zack Nye took a shot from about 30 feet and bounced it off the left goalpost, keeping the game tied 0-0. In the 36th minute, the aforementioned La Crosse Central goalkeeper had already made a save and was still on the ground. River Falls had a quick rebound shot opportunity. The kick had too much air on it and went off the top crossbar which again kept the score 0-0.

The game remained deadlocked and scoreless until the end of regulation. The first overtime was also scoreless. In the second overtime with just over two minutes left to play, RFHS junior defensemen and team captain Elliot Auderieth scored the first goal of the game. A few moments later River Falls scored another goal to take a 2-0 lead which sealed the victory for the Wildcats.

When the final horn blew at the end of the second overtime, head coach Langer dropped to his knees in celebration as the emotions came over him. In the postgame interview, Langer talked about how big of a win it was against La Crosse Central in the sectional semi-final.

“It means a ton, it means so much to us,” Langer said after the win. “That last game that we won in Onalaska, that was the first time we’ve won that game in six years. This is a game that for these boys, they’ve never even dreamt of being here. To be able to get one last home game, going in as a three seed, the last thing you expect is to get a home game to go to the sectional final. To be able to feed off of that energy was huge.”

Langer talked about the 80-minute stalemate that caused the overtime and eventually the double overtime to be played.

“It was one of those games where you feel like it’s coming, but every chance you get it’s high or it’s wide,” Langer said. “To be able to capitalize and be able to put the game away was huge and especially that second goal. It was a well-fought game. That’s a great team that we just played. I was very impressed with everything that they did tonight.”

When Auderieth scored the first goal of the game late in the second overtime, Langer knew it couldn’t have been done by a better leader.

“Elliot (Auderieth) is a great leader,” Langer said. “He’s super emotional and you can see it in the way he talks. He has one tone and it’s always yelling. He’s a utility guy for me and he’s always going to give energy no matter what. For him to step up and put that one away, I’m sure he’s pretty happy with himself.”

River Falls will play in the Division 2 semi-final against #1 seed Oregon. That game is slated to begin at 4:30 p.m. Friday, Nov. 5 at the Kohler Engines Stadium at Uihlein Soccer Park in Milwaukee. 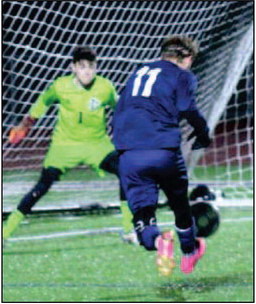 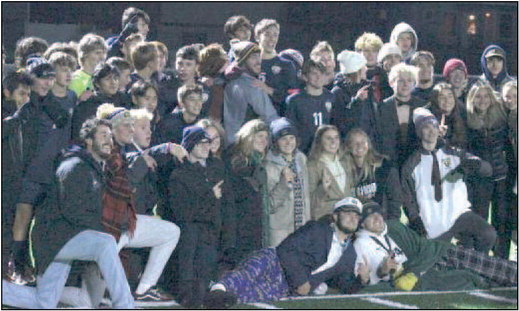