The timeout did little to slow the Wildcat scoring. River Falls carried the momentum to an 18-10 lead over the Brookfield Central Lancers. However, that’s when the Lancers began making their push to get back into the set. After taking another timeout while trailing 18-10, Brookfield Central came out of the stoppage and put together a scoring run.

Brookfield Central managed to trim the lead to four points when they trailed 23-19 with the game hanging in the balance. However, quality defense and serve receive positioning by River Falls helped the Wildcats finish off the first set in a 25-21 victory to take a 1-0 lead in the best-of-five series.

After Brookfield Central tied the game 21-21, the Lancers scored four consecutive points to win the second set 25-21, evening the series 11 through the first two sets of the match.

The first two sets of the match felt like a heavyweight fight where both teams were just exchanging blows and going round-for-round with each other. The third set was no exception to that. Brookfield Central jumped out to a 3-1 lead early in the set. River Falls quickly responded and took the momentum away when senior outside hitter Dani Lien placed a kill to perfection in the back right corner of the court. The effort for the Wildcats was on full display. While trailing 8-7, Morgan Kealy made a diving save in the back of the court. River Falls was able to put together a set and kill opportunity that tied the game 8-8 because of the diving effort of Morgan Kealy.

A few minutes later, River Falls scored three straight points to take a 12-9 lead. The Wildcats carried the small lead to the end of the third set, which was a 25-21 victory for River Falls. The Wildcats took a 2-1 lead in the series.

Simply put, Brookfield Central dominated the fourth set from the first serve to the final point. River Falls fell behind 7-2 which forced a timeout by Sara Kealy to slow the Lancers’ momentum. The Lancers’ excellent play in the fourth set carried them to a 2519 victory that tied the series 22 and forced a fifth and final set in the state quarterfinal.

The Wildcats got the ball first in the fifth set. However, Morgan Kealy served it out of bounds giving the Lancers a 10 lead to start the final set. Brookfield Central played great volleyball which included solid defense and great offensive rotations which contributed to the 7-3 lead in the final set which forced a River Falls timeout. The Wildcats were running out of time to these kids are so great because they give so much to each other and this team in order for us to have the season we’ve had. It’s hard to see it end that way.”

Sara Kealy also spoke about the level of competition at the state tournament. Specifically, how mistakes are amplified on a stage this large, compared to a regular season match or even a regional playoff series.

“Every team here is amazing, especially Brookfield Central,” Sara Kealy said. “If we have a service error or hitting error, they’re going to capitalize on it. They’re going to score points. What might be one mistake might turn into two or three points. We have to play point-for-point, we can’t give up runs. I think both teams struggled with that at times. I think we lost the momentum probably halfway through the fourth set and never got it back.”

When this state tournament appearance is talked about by fans and people in the River Falls community several years from now, people will remember that the match went to a fifth set and that River Falls couldn’t quite finish the job. However, hopefully, what doesn’t get lost in history is the injury of junior outside hitter Brianna Brathol.

Brathol’s injury was a devastating blow to the Wildcats’ rotation. The injury happened late in the first set of the regular season finale against Chi- We relied on Brianna for a lot of the season, so having her out changes our team.”

Although it’s impossible to know if Brathol’s presence would have changed the outcome of the Brookfield Central match, there is no question that it had a significant impact on the 2021 playoff run. In the postgame media session, junior Morgan Kealy spoke about how impactful the senior class of Kinsley Albores, Haley Graetz, Brynn Johnson, Olivia Redmond, Giada Corazza, Dani Lien and Maddy Doerre have been.

“I love the seniors this year,” Morgan Kealy said. “This year I felt like I got closer with a lot of them and they’ve been a big part of our team.”

Coach Sara Kealy also chimed in and provided her thoughts on what has been an unusually senior-laden roster for the 2021 season.

“It’s interesting, in the past we’ve had groups that have been balanced (in terms of the number of seniors) and we don’t have that now,” Sara Kealy said. “We had three seniors and four juniors and then when Brianna got injured it became four seniors and three juniors, we just don’t have a lot of freshman and sophomores like we have in years past.”

The aforementioned Lien has been one of the most impactful players in the River Falls roster for the last four years. In her media availability, helps you understand a person and it makes it more meaningful playing next to them.”

Although the season ended in defeat, another state tournament appearance continues to build the River Falls volleyball program’s reputation for being one of the best Division 1 volleyball schools in the state.

(From left): Brianna Brathol, Kinsley Albores, Hannah Jarocki, Maddy Range, Becca Randleman, Brynn Johnson and Sara Kealy cheer on the Wildcats on the floor after they scored a point against Brookfield Central at the state tournament in Green Bay. Photo by Reagan Hoverman

RFHS junior Abi Banitt gets into position during the first set against the Lancers at the state tournament. Banitt’s hustle was on full display in the five-set match in Green Bay, as she was making diving saves throughout the match. Photo by Reagan Hoverman

Brianna Brathol and head coach Sara Kealy sit together on the bench and wave to fans before the Wildcats played Brookfield Central in the state semi-final in Green Bay on Thursday, Nov. 4. Photo by Reagan Hoverman

Junior Morgan Kealy sets the ball for senior outside hitter Brynn Johnson during the match against the Brookfield Central Lancers. Photo by Reagan Hoverman turn the set around.

Brookfield Central continued the scoring barrage which culminated in a 15-7 fifth set victory, giving the Lancers a 32 victory in the series. After the match, Sara Kealy provided an instant reaction to the quarterfinal loss.

“I felt like that was a heavyweight slugfest with two really good teams,” Sara Kealy said. “They have such a strong player inMckenna (Wucherer) who can dominate back of the net and behind the service line. I thought we matched up against them really well and went back and forth and traded energy and points. In the end, it’s heartbreaking because

Despite being a nearly four-hour drive, the River Falls High School student section had a significant presence at the Resch Center in Green Bay for the Wildcats’ match against Brookfield Central. Photo by Reagan Hoverman 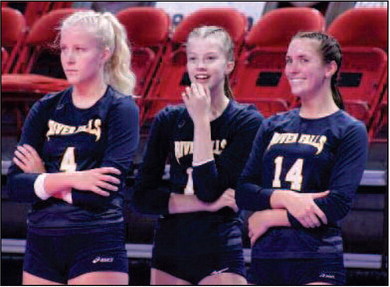 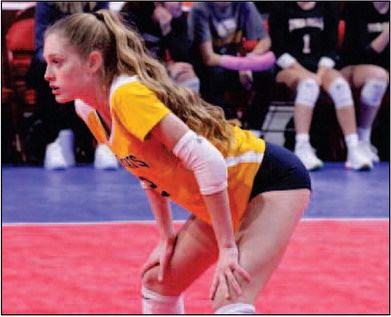 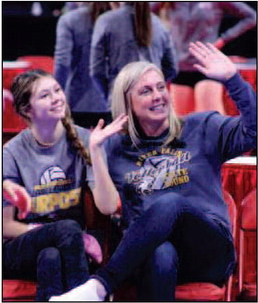 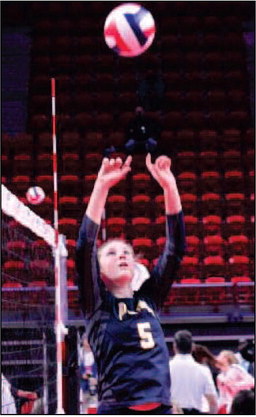