Ellsworth head coach Rob Heller speaks to a portion of the team during a timeout in the sectional semi-final game against Northwestern on Friday night. The players in the foreground are freshman Nolan Kummer (#77), senior Ryan Matzek (#88) and junior Jurell Gooden (#24). Photo by Reagan Hoverman
News, Sports
Ellsworth offense can’t be stopped in road blowout playoff victory

Only one obstacle to state title game remains for Panthers!

On Friday, Nov. 5, the Ellsworth Panthers football team easily defeated the Northwestern Tigers on the road in a Division 4 Sectional Semi-Final matchup. The 54-13 victory for Ellsworth advances the Panthers to the sectional final game against Freedom on Friday, Nov. 12.

Computer seeding gave Northwestern the top seed and thus, home-field advantage against Ellsworth in a game to go to the sectional final. Senior Ellsworth running back Max Grand spoke about having a chip on their shoulder for not getting the #1 seed.

“Absolutely there was,” Grand said. “Just the fact that we had to get on a coach bus and come up here and play on their home field, but we showed them. Everybody else in the state knows now that we’re not to be messed with.”

The added fuel of not getting the #1 seed and having to travel was apparent throughout the game. On the opening drive of the game, the Northwestern Tigers drove down the field to take a 7-0 lead with 6:25 remaining in the first quarter.

From the first moment that the Ellsworth offense hit the field, it was clear that the Panthers were physically superior to Northwestern. On first and 10 at the Ellsworth 46-yard line senior

With 1:40 remaining in the first quarter, Ellsworth was in a fourth and short situation. Janke handed the ball off to Grand who ground forward for a seven-yard carry to get down to the Tiger one-yard line. Moments later Janke finished the drive off with a one-yard QB sneak which was followed by an Ashten Quade two-point conversion to give Ellsworth its first lead of the game 8-7.

On the ensuing Northwestern drive, an illegal blindside block put the Tigers in third and 25 deep in their territory. An incomplete pass was followed by a punt that gave Ellsworth possession at their 40-yard line. A couple of plays into the drive, Janke scored on a 40-yard rushing touchdown, breaking multiple tackles on his way to the endzone which gave Ellsworth a 16-7 lead after another successful Quade two-point conversion less than one minute into the second quarter.

On the second play of the drive, Grand scampered to the Northwestern two-yard line before being brought down by multiple Tiger defenders. Grand finished off the drive with a two-yard touchdown carry to give Ellsworth a 30-7 lead going into the halftime break. After the game, Grand spoke about the success that he and Quade had in the rushing game against Northwestern.

“It was 100% offensive line tonight,” Grand said after the blowout victory. “We controlled the line of scrimmage the whole game and I think that’s what did it. Opening lanes for Ashten (Quade) and me to run. If you get that kind of room to work with, it’s going to be a good game for us on offense.”

A good game it was. Grand added another rushing touchdown 31 seconds into the third quarter to take a 38-7 lead. Northwestern answered with a touchdown of their own to make the score 38-13 after a failed two-point conversion attempt.

On the ensuing Ellsworth possession, Quade joined the scoring party when he broke loose on a 56-yard touchdown run to give Ellsworth a 47-13 advantage with 4:56 remaining in the third quarter. Janke scored a garbage-time touchdown in the fourth quarter to give Ellsworth a final score victory 54-13. After the game, head coach Rob Heller spoke about the win.

“I’m so happy for these kids, the community and the school,” Heller said. “It’s been a while since we’ve been to level four (sectional final) as a program. I’m happy with the way these guys came out and played tonight against an undefeated, tough physical Northwestern team. I think we made the Middle Border (Conference) proud tonight.”

The driving force in the Panthers’ victory in the sectional semi-final was the rushing attack of Grand, Quade, and Janke. What has become a three-headed monster, has proved thus far, 11 weeks into the season, that Ellsworth has yet to play an opponent that can even remotely slow down the aforementioned three players.

In the game against Northwestern, Grand had 209 rushing yards on 18 carries and averaged 11.6 yards per carry. Quade had four carries for 97 rushing yards and a touchdown. In addition to Janke’s 48 passing yards, he amassed 73 rushing yards on five carries, four of which resulted in Ellsworth touchdowns. Janke, Quade and Grand accounted for all seven of the Panthers’ scores. Heller spoke about their talent and impact on the game.

“Max (Grand), Ashten (Quade) and Jack (Janke), they were men amongst boys tonight,” Heller said. “I don’t want to pat us on the back too much, but we play a physical brand of football and it carried us on to a nice win at level three.”

The Ellsworth Panthers are now in a situation where very few previous Ellsworth football teams over the last 30 years have been – a sectional final football game. For Heller, he and the team are just trying to enjoy the experience and the magical season.

“I think our program is just trying to enjoy the ride,” Heller said. “Like I’ve said the last couple of weeks, we have a chip on our shoulder with some unfinished business from last season not getting the opportunity to make a run. These guys are making the most of their opportunities and playing some really good football at the right time of the season.”

The great season has led Ellsworth to a sectional final game at a neutral site against Freedom. The game will be played in Marshfield on Friday, Nov. 12, and is slated to begin at 7 p.m. The winner will earn a trip to state. 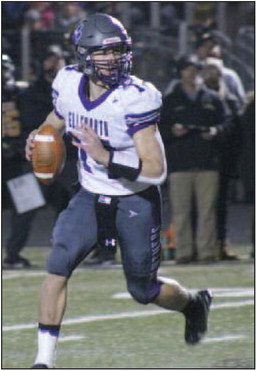 Ellsworth senior quarterback Jack Janke rolls out of the pocket as he looks for an open receiver downfield in the Ellsworth sectional semi-final game against Northwestern on Friday, Nov. 5. Janke had three completions for 48 yards, but a majority of his damage came on the ground. He had five carries, four of which were touchdowns. Photo by Reagan Hoverman 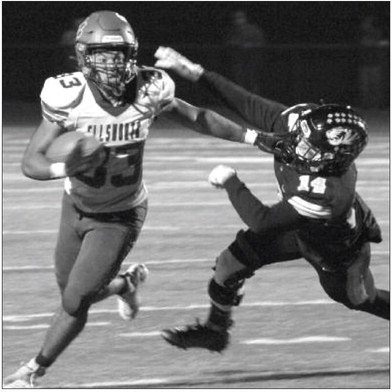 Ellsworth senior running back Max Grand delivers a stiff arm to a Northwestern defender on one of his game-high 18 carries for the Ellsworth Panthers in their 54-13 blowout sectional semi-final win on Friday, Nov. 5.Photo by Reagan Hoverman