By Sarah Nigbor RIVER FALLS – If you’ve taken part in a theatre production, you may have a good idea the number of hours that go into producing a show to remember. River Falls High School drama students have been pouring their hearts and souls into perfecting “Matilda,” set to open Nov. 13.

Drama Director Kim Miller and the cast and crew are thrilled to be back rehearsing and working in a theatrical setting.

“We finished a live show in May this year (moved due to COVID) and we all jumped back in a few months later to do another one,” Miller said. “That just shows the passion the students and creative team have. Theatre brings people together and helps us tell important stories – we need that more than ever during this pandemic.”

“Matilda” was chosen because it fit the cast so well, Miller said. The book, written by British author Roald Dahl, tells the story of Matilda, an underappreciated young lady who finds she has special powers. Thanks to her teacher and mentor Miss Honey, she realizes her potential and uses her powers to exact revenge on headmistress Miss Trunchbull.

“We knew we had a lot of talent coming our way and we wanted to spotlight as many students as possible,” Miller said. “This show has a lot of leading roles as well as a fun ensemble, so that balance really makes a show a joy to be part of.”

Miller also adores Roald Dahl’s stories and remembers “The BFG” as the first chapter book she ever read.

“His writing style really hooked me,” Miller said. “He helped me develop my imagination and love of books. I’m sure that’s a huge part in why I am an English and drama teacher.”

The cast has been rehearsing since summer. Students auditioned at the end of July and jumped into a “boot camp” style rehearsal schedule in August, Miller said. The cast rehearses roughly 17 hours per week for about 10.5 weeks – in all, about 1,700 hours total.

“And that’s just rehearsal!” Miller laughed. “There is a lot of time outside where we scene paint, run lines, and practice songs, design lighting, and so on. It’s basically our full lives until mid-November.

“We all have put so many hours into this show to make it as magical and entertaining as possible,” Miller promised.

A show of this magnitude, while incredibly rewarding when it all comes together, has its challenges as well. Portraying the magical elements of the story had the crew thinking outside of the box in order to bring those moments to life. Miller credits set designer Troy Dixen’s ingenuity.

“There are multiple events that Matilda makes happen ‘through her eyes’ that we needed to translate to the audience – a flying girl, a cup tipping over, an ear being stretched, a chalkboard writing by itself and more!” Miller said.

The most rewarding aspect of the show is seeing it all come together. The highly technical needs, the challenging music, using British accents and the large cast/crew/pit, plus multiple scene changes – Miller describes the show as a beast.

“Seeing them do a dress rehearsal or run-through is super impressive,” she said. “I am so proud of all of the students and the creative team. They are putting their everything to make this thing work.”

In 1,700-plus hours of rehearsal and preparation, there are bound to be funny moments that help lighten the work load. Miller said it’s those moments that make all the stress worth it. She remembers one incident in particular.

“A memorable moment to me is when we used our silhouette and back-lighting shadows for the firsttime,” Miller said. “Seeing the shapes and perspectives of students’ bodies on the screen made me and others members of the creative team laugh until we cried. Experimenting with these creative choices, whether technical in nature or in acting, are always fun.”

As one can imagine, such a monumental show will have multiple standout moments. Miller said the magical events are obvious, but watching how the cast, crew and pit flow through the scenes together is something special to see. She likens it to “keep the balloon in the air.”

“They cannot drop one moment in order for the show to flow, so it’s beautiful to see them hit the metaphorical balloon to each other so that they each have a chance to shine and make the show come alive,” Miller said. “Their relationships and ability to gain more momentum in each scene are amazing.” Witness the magic for yourselves at 7 p.m. Nov. 13, Nov. 18-20 or at 2 p.m. Nov. 14 at the River Falls High School auditorium. Tickets can be purchased at rfpa.ludus.com The original opening night, Nov. 12, had to be cancelled due to student illness. 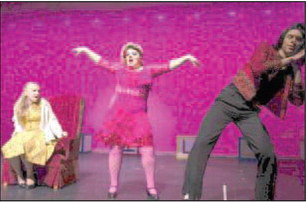 (From left): Elleandra Maloney (Miss Honey), Maeleea Larson (Mrs. Wormwood) and Jackson Range (Rudolpho) have been rehearsing for their parts since August. “Matilda” promises to be a show to remember for years to come. Photo courtesy of Andrea Wagner Photography 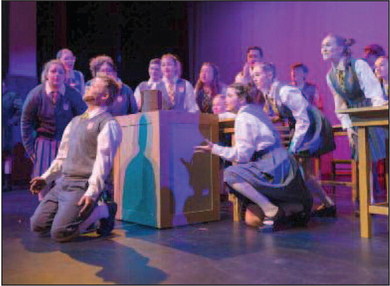