For only the second time in program history, the River Falls High School boys soccer team earned a trip to state, which ended in a 2-0 loss to the Oregon Panthers, the #1 seed for Division 2 soccer.

RFHS boys soccer head coach Jacob Langer described it as a “magical” season for a program that has only been around since the mid-1990s. The season was magical by any standards. The program’s only other state berth was in the 2015 season. In that season, the Wildcats got hot during the playoffs and used the momentum to reach the state semi-final match against Cedarburg, which they lost 2-1 in double overtime.

This season was similar to that postseason in 2015 in multiple ways for the Wildcats in Langer’s first year as head coach of the program. In that 2015 year, the team was a good regular season team that had a couple of regular season losses. Despite not having a great seed in the postseason, both the 2015 and 2021 teams strung together impressive postseason performances to reach the state tournament.

The 2021 season featured the line state tournament game against the top-seeded Oregon Panthers. Langer spoke about that contest against the best Division 2 team in the state.

“Oregon is the best high school team that I’ve ever seen,” Langer said. “They ended up beating Whitefish Bay 3-1 to win the championship. They had not been shut out in a game all season and were also undefeated. Going into it, we knew that we were going to have to be out on the front foot and chase the result a bit.”

The first 20 minutes of action were scoreless. In those 20 minutes, River Falls had two shots on goal compared to Oregon’s three shots. The scoring began in the 22nd minute when Eli Lehmann of the Oregon Panthers made a pass to Carter Uhlmann who scored a chip shot goal to give Oregon a 1-0 lead over River Falls. Fourteen minutes later in the 36th minute, Oregon scored again. This time it was Christian Wirtz with the goal assisted by Lex Rodriguez to give the Panthers a commanding 2-0 lead just minutes before halftime.

“We held our own for a good chunk of the first half,” Langer said. “They scored two goals back-to-back within about 10 minutes of each other. They’ve got these two attackers that are absolutely incredible attackers with great technical ability and great speed. If you combined my fastest player and my best technical player, they had two of those.”

Although the first half didn’t go the way River Falls wanted it to go, the second half was much better and the River Falls offense was able to generate some quality looks which included five shots on goal, none of which were able to find the back of the net.

“In the second half we had them pinned for a majority of the half,” Langer said. “There was a lot more back and forth. At the end of the game, their coach said he felt like they had snuck one away there in the second half. We had our chances. If you look at the box score it looks like we got outplayed, and we did, they’re the better team, but we had our chances.”

As a head coach, Langer was in a position where he knew what kind of roster Oregon had and he knew that his players were in a position that they’ve never been in before – competing at the highest level of high school soccer for a state championship. He spoke about what kind of message he gave to the team just minutes before the game began.

“The biggest message I had for the boys was to stay calm and composed,” Langer said. “We knew that they were going to be very good at moving the ball and there would be stretches where we would be playing under pressure. Keeping that composure was the biggest thing, as well as not getting stressed and finding a way to weather the storm. They went into the game believing they had a chance and they proved to themselves and the other teams that even as a #4 seed we were a solid team.”

When the final whistle blew, River Falls had lost 2-0 to Ore- gon, a team that went on to win the state championship 3-1 the following day. Even though the result wasn’t what River Falls wanted, Langer said it was still an amazing experience for the program.

“It was a ton of fun,” Langer said. “We got to watch a lot of really good soccer. Overall, the easiest way to refer to it would be to call it a magical opportunity. This group of seniors we have now were freshmen in my first year in the program. I grew as a coach alongside them while they grew as players. To be able to have that all culminate together into one moment like that was something really special that I will carry with me for a while.”

Langer stated that the true leaders of the team this season were the senior class of boys. He stated that they’re incredible kids and leaders who have had to endure some of the toughest seasons in River Falls soccer history. A lot of that heartbreak is from exiting the playoffs earlier than expected in previous years.

“They’re incredible leaders that have been through some challenging seasons, getting knocked out of playoffs way earlier than expected,” Langer said. “They’re incredible leaders and I think that is going to be the hardest thing to replace. I had four or five kids that were captain-caliber leaders that were present on the roster and filling that void will be huge. I don’t think it will be the same.”

It’s way too early to begin looking at next season in terms of roster construction and how the team could potentially play, but Langer says that some of the intangible aspects of the team, as well as the confidence of making a state tournament appearance, are things that could carry over to the 2022 soccer season.

“I think next year we can expect to carry this momentum going forward,” Langer said. “If we’re able to develop around the rest of the players I expect us to be able to make another run next year with a good core of the team coming back. We’ve got the building blocks to keep pushing forward.”

As is the same with every sport in high schools across America, class sizes ebb and flow which can impact the program in positive and negative ways. Despite that, Langer and the rest of the coaching staff will continue to work at growing the program to help make another run at a state tournament appearance next season. 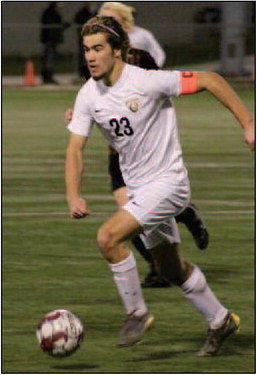 Senior Wildcat midfielder Miles Longsdorf moves the ball down field as he tries to maneuver through the Oregon defense. Head coach Jacob Langer said that Longsdorf’s leadership will be nearly impossible to replace next season. Longsdorf was one of three captains this season. Photo by John McLoone 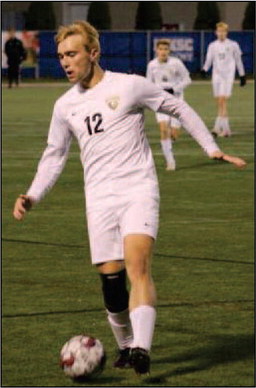 Senior RFHS midfielder Isaac Carns advances the ball down the sideline during the Wildcats’ game against Oregon in the state quarter final. Carns and the Wildcats got some quality shots on goal but couldn’t convert any in the 80 minutes of regulation. Photo by John McLoone 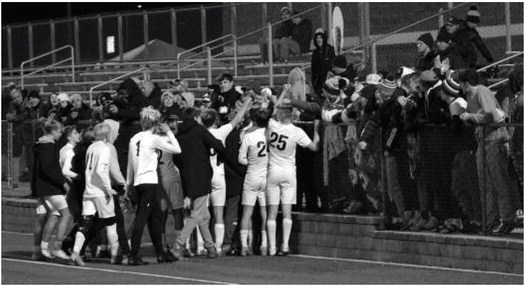 River Falls soccer players saluted thier fans who made the long drive to Milwaukee Friday to cheer the team on at the WIAA State Tournament. Photo by John McLoone