The University of Wisconsin-River Falls football team has won its sixth and seventh game of the 2021 season over the last two weeks. Reaching seven wins, with still one game to play, makes this year the most successful campaign the program has had since 2000.

On Friday, Oct. 30, the UWRF Falcons hosted UW-Platteville, a team that came into the game with a 2-5 record. River Falls entered the game with a 5-2 record, including a 2-2 record in WIAC action.

River Falls got on the board first with a 32yard touchdown pass from Kole Hinrichsen to Brady Agrimson to give River Falls a 7-0 lead on the opening drive of the game. After multiple defensive stops by both teams, UWRF got the ball back midway through the second quarter.

The Falcons drove 73 yards down the field and capped off a nearly three-minute drive with a one-yard Ben Beise touchdown run to take a 14-0 lead with seven minutes to play in the second quarter.

Less than four minutes later Platteville responded with a nine-play four-minute drive that culminated in a three-yard touchdown pass from Colin Schuetz to Logan Ketelhut to make the score 14-7. The Pioneers scored again with only 14 seconds remaining in the first half when Schuetz connected with Brandt Stare on a six-yard touchdown pass which tied the game 14-14 going into halftime.

Platteville responded with a touchdown less than two minutes later, which trimmed the UWRF lead to 24-21. At the end of the third quarter and the beginning of the fourth quarter, River Falls methodically drove down the field which ended in a 10-yard touchdown rush by Hinrichsen to take a 31-21 lead. Platteville added a garbage-time touchdown which made the final score a 31-28 victory for the Falcons on senior day. After the game, Matt Walker spoke about the win.

“Any win in this league is special, I don’t care who you are or who it’s against, a win in this league is a big deal,” Walker said. “That’s an incredible football team. That’s a huge win for us. I think we did a much better job of blocking on the perimeter today. That’s an unnoticed part of the job, but that makes our offense go. We were better in our base run game today. They’re boring four or five-yard run plays, but when it’s second and five instead of second and eight, that unlocks a lot for us.”

The offense is always the flashiest part of a football team, but Walker said that the River Falls defense deserves credit for how they handled what he views as a tough Platteville team.

“To hold those guys when they were in a fast-paced scramble mode, (our offense) didn’t put the defense in a very good spot. We drove it great, but we struggled scoring it today. We left a bunch of points out there.”

Walker stated that his coaching philosophy is different than almost any other coach out there. He wants to play aggressively and go for it on fourth down often.

“I know I’ve got a reputation for being crazy on fourth down,” Walker said. “We’re not normal. Our offense is weird, our defense is weird, we go for it at weird times. I’m not scared, and we don’t care. We do it because we trust one another. The trust we have between offense, defense and the kicking game, this is just how we play.”

The aggressive, go-for-it style of play-calling has worked out for Walker this season, and that philosophy contributed to the 31-28 win against Platteville on UWRF’s 2021 senior day. Walker spoke about his senior class and what that group of guys has meant to him and the program.

“No group deserved that last home regular season win on this field more than that group,” Walker said. “They’ve given me and this program, and the kind of standard they’ve set with their work ethic, no group has deserved it more than this group.”

The momentum of winning the Platteville game seemed to travel with UWRF to their next game, which was on Saturday, Nov. 6, on the road against the University of Wisconsin-Stout.

In that game, the Falcons scored 27 of the first 34 points of the game. The River Falls offense was firing on all cylinders and featured three touchdown passes from Hinrichsen to various receivers including Charlie Huschka, Andy Groebner and Jager Reissmann, in addition to a 65-yard rushing touchdown by Luke Fugate.

At halftime, the Falcons led Stout 27-7 in a game that was essentially decided in the first 30 minutes of action. In the second half, the Stout offense showed signs of life, but couldn’t compete with the high-powered scoring ability of the Falcons. UWRF cruised to a 57-35 victory on the road against another WIAC opponent.

Hinrichsen led the charge for the Falcons, amassing 306 passing yards through 26 completions, four of which went for touchdowns. The Robin to Hinrichsen’s Batman was the aforementioned Fugate, who accounted for 247 rushing yards on 21 carries, three of which went for touchdowns. The dominant offensive display carried UWRF to its seventh win of the season, the most for the program since 2000.

With one game remaining, Walker’s team could have its best season since 1998, the last time the Falcons won the WIAC championship.

River Falls will get that opportunity on Saturday, Nov. 13, when they travel to the University of Wisconsin-Oshkosh to take on the Titans. That game is slated to begin at 1 p.m. 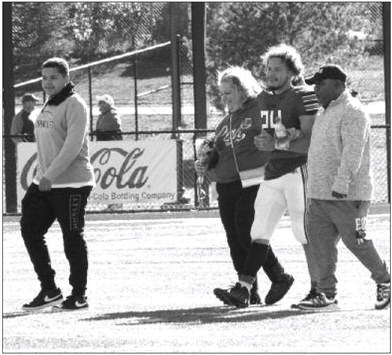 Senior running back Anthony Silva walks out to midfield with his family during the senior day ceremony at Ramer Field on Saturday, Oct. 30. Photo by Reagan Hoverman