With the 46-7 victory over Freedom in the Division 4 Sectional Final game, the 2021 iteration of the Ellsworth Panthers football team cemented its legacy as one of the best teams in the history of Ellsworth football, regardless of what happens in the state title game on Thursday night.

The Ellsworth Panthers’ blowout victories continued on Friday night in the dominant performance against Freedom at the neutral site of Marshfield. The Panthers got the scoring going late in the first quarter when senior quarterback Jack Janke connected with senior wide receiver Ashten Quade on a 23-yard touchdown pass which was followed by an unsuccessful two-point conversion attempt. Ellsworth took a 6-0 lead over the Irish.

The first score was with 5:46 remaining in the second quarter when Janke scored on a four-yard touchdown run which was followed by a successful two-point conversion to give the Panthers a 14-0 lead.

Approximately 30 seconds later on the ensuing Freedom possession, Irish quarterback Nathan Senso threw a pass that was picked off by Quade. After breaking a few tackles on his way to the endzone, Quade

Ellosworth senior Ashton Quade’s interceptions for touchdowns on consecutive series in the second quarter helped put the game away for the Panthers. Photo by John McLoone CRUISING

gave the Panthers a 22-0 lead with his pick-six.

The rattled Freedom Irish got the ball back once again. This time, they were trailing by three scores and needed to make something happen. Instead, backup quarterback Jamison Rudie came in the game and threw a pick-six of his own. It was again Quade who jumped the route and returned it for a house call.

What was a six-point game with six minutes left in the second quarter, quickly became a 24-point game that was essentially over less than three game minutes later. Freedom’s chance of winning went out the window after Quade made the two biggest plays of the game on the defensive side of the ball. After the game, Ellsworth head coach Rob Heller spoke about Quade, the defense and the team’s week of preparation.

“I don’t know if I’ve ever been a part of a week of preparation like this,” Heller said. “We were extremely well prepared. The kids did their job watching film on their own, did the job in practice this week and Ashten Quade was just a man on fire there in the second quarter. My hat is off to the players because they prepared like they wanted to get to Madison.”

Although the flashy, high-powered offense has been the story of the season, the defense held Freedom to six points and scored 12 points of its own. After the game, Janke spoke about the defensive effort and also some unsung heroes on the offensive side of the ball.

“Ashten Quade absolutely had a night,” Janke said as he walked off the field. “He blew the game open for us. Our defense was solid all night and our offensive line is – they’re everything. They open up lanes for Max (Grand) to run through and he’s running hard. Without them, our offense wouldn’t be able to do anything. Our offense is a big help to our defense too.”

Even after the super-human effort of Quade in the second quarter, there were still 24 minutes of football to be played in the second half. With five minutes remaining in the third quarter, Janke took off on a 13-yard touchdown run that was followed by a two-point conversion on a running back dive by Grand. The score gave Ellsworth a 38-0 lead just as the snow began to fall and the temperature began to drop in Marshfield.

On the ensuing Freedom drive, the Irish methodically marched down the field and put up their first score of the game. The Irish capped off the drive with a 12-yard touchdown pass from Senso to Cole Jochman. The PAT was good, making the score 38-7 in favor of Ellsworth with 2:45 remaining in the third quarter.

Approximately three minutes later on the first play of the fourth quarter, Grand broke loose for a 32-yard touchdown run to score Ellsworth’s final touchdown of the game, making the score 46-7 in favor of the Panthers. After the game and a Gatorade bath in freezing cold temperatures, Heller spoke about the win for his Panthers and how it feels to get to state.

“It feels amazing,” Heller said. “I couldn’t be happier for this group of players, our community, our school, this group of students. It’s going to be a lot of fun next week and it’s well-deserved by these guys.”

During the postgame interview Heller talked about his first season of coaching, what that was like, and now, many years later, how it feels to finally be in a state championship game.

“My first season with Coach Janke we came up here and went 2-7,” Heller said. “So, we’ve come a long way, and hats off to those guys. They prepare every weekend like it’s a Super Bowl and hats off to the kids. They found ways to get better in a tricky offseason. I’m just excited for everybody involved. It’s been a good journey.”

The star of the game was the aforementioned Ellsworth senior Quade. He had 11 carries for 109 rushing yards, as well as five receptions for 85 yards and a touchdown. Not to mention the two interceptions that he returned for touchdowns in the second quarter. Quade spoke after the game.

“It’s all glory to God,” Quade said. “He puts me in a position and lets me make the play. I have to do that for my team, my coaches and for the preparation we put in throughout the week. We knew this was going to be a good team, but we were confident, and I’ve never been so confident in a team that I’ve played for.”

“It feels great,” Quade said. “A lot of us have been dreaming about this since we were little. I’m glad that we can do it for this program and these coaches. They deserve it. We got to go down there and win.”

The Panthers go into the Division 4 State Championship game with a 12-0 record and will face 13-0 Catholic Memorial. The game is slated to begin at 7 p.m. on Thursday, Nov. 18, at Camp Randall in Madison.

(From left): Max Grand, Ryan Matzek, Nolan Kummer, Ashten Quade and Braxton Quade celebrate Ashten Quade’s interception that he returned for a touchdown against Freedom in the Sectional Final. Photo by John McLoone

Senior Ellsworth quarterback Jack Janke and his dad, Jason Janke, embrace moments after winning the Sectional Final. Coach Heller said both of the Jankes have been integral to the Panthers’ success this season. Photo by Reagan Hoverman 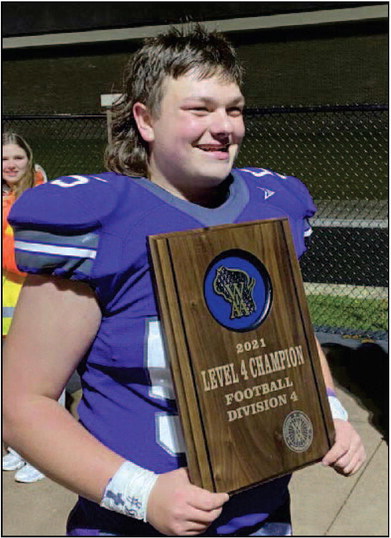 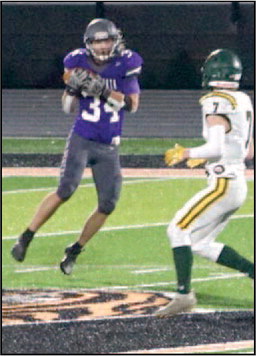 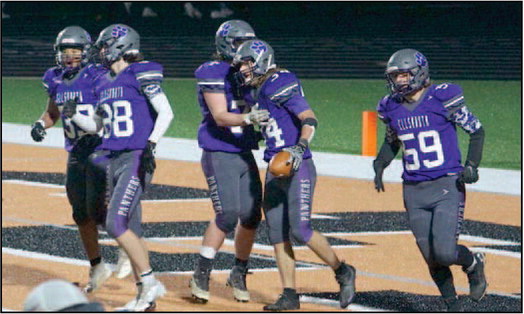 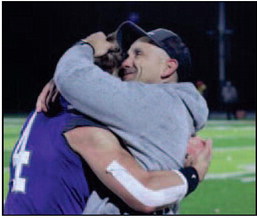