Since the 2020 season ended prematurely due to the COVID-19 pandemic and no state title game was played, the Ellsworth Panthers football team has adopted a mentality of “unfinished business” for the 2021 season. On Thursday, Nov. 18, in the Division 4 State Championship game, Ellsworth will get its chance to finish business.

The Panthers finished the 2020 season with a flawless 80 record, a season that ended in a WIAA Level 2 playoff game against the Northwestern Tigers, which Ellsworth won 42-14. Public health concerns ended the season early, and Ellsworth never got its chance to compete for a state title.

Now, in the 2021 season, Ellsworth is 12-0 and has earned a spot in the state title game against a private school powerhouse in Catholic Memorial. It will be a clash of the titans on Thursday night, as both teams enter the game with undefeated records. Ellsworth 12-0 and Catholic Memorial 13-0.

In the WIAA media session for all coaches in the various state title games, Catholic Memorial head coach Bill Young spoke about his team and coaching staff.

Ellsworth senior running back Max Grand races past a Freedom defender during one of his 27 carries in the Sectional Final game against the Irish on Friday, Nov. 12. Photo by John McLoone

Junior offensive lineman Louie Jahnke gets a high five from the Panthers’ offensive coordinator Jason Janke after Louie made a great tackle on a kickoff. Photo by John McLoone

The Ellsworth Panthers student section cheers as the Panthers dominate the Freedom Irish in the Sectional Final game. The students traveled over two hours to watch the Panthers play in the Level 4 playoff game. Photo by John McLoone

“You’ve got to have talented players to win, and we’ve been blessed to have really good kids come to Memorial,” Young said. “Football is very important to all of these kids; my coaching staff does a great job with my kids.”

“We made some adjustments at halftime,” Young said. “In the second half, with the weather throughout the state not being conducive to throwing the ball, we were able to run the ball, control the clock and play outstanding defense. It’s an attribute to our kids and the coaches and the culture. It takes a long time to build that.”

The Crusaders pride themselves on being a fantastic defensive program. The second-leading tackler on the team, Langston Latham, has been a difference-maker this season for coach Young’s roster.

“He is a terrific young man, his brother (JC Latham) is playing at Alabama right now,” Young said. “He got hurt last year and was gone for almost the whole year. The first game of the year was a nail-biter against Brookfield Central. He didn’t play in that game. Since he’s been back (after that game) we’ve been outstanding, and he’s solidified our defense.”

Coach Young also spoke about how his defense will have to deal with Ellsworth’s fast, dynamic offense, led by seniors Max Grand, Jack Janke and Ashten Quade.

“I know we have a huge task at hand, Ellsworth has great running backs and a lot of team speed, they have a talented quarterback,” Young said. “Max Grand, Ashten Quade and Jack Janke, that’s a three-headed monster right there. Those are three terrific kids, I know the quarterback has a scholarship at the level, and Max Grand, I know the speed that Ellsworth has. They have some very talented players and a unique offense.”

Coach Young spoke about how one of the strengths of Ellsworth’s offense is getting the ball to impact players regularly.

“Good teams find a way to get the ball into their best players’ hands,” Young said. “The quarterback will run the quarterback run, Max Grand is just a complete football player that has the ability to get physical, and Ashten (Quade) is a kid they’re going to throw him the ball, run the jet sweep, he’s an outstanding player and we’ve got our work cut out for us.”

Of course, Ellsworth isn’t the only team in the state championship in the game with fast, talented players. Catholic Memorial’s Corey Smith has rushed for over 1,000 yards this season and is as explosive as any back that Ellsworth has. Coach Young spoke about Smith’s ability to make big plays happen.

“Cory (Smith) is a very talented young man,” Young said. “We’ve sold the idea that our kids got to run track. Cory was one of the top 100meter kids in the state. He’s going to be a special back. The other night he had 175 yards rushing the ball. He has the innate ability to make jump cuts in a close area, gets on the edge, he has the speed to make a 10-yard run an 80-yard touchdown. He’s been special.”

After coach Young’s media session was done, Ellsworth head coach Rob Heller spoke to the media about his team.

“We’ve had two really successful seasons here back-to-back, and I’m almost certain we have the longest winning streak in the state currently,” Heller said. “We have a lot of senior leadership and some pretty exceptional team speed. We’ve put together one heck of a season and we’re looking forward to competing for a gold ball on Thursday.”

Coach Heller spoke about how he’s known this group of seniors since his first year at Ellsworth, back when the class of 2022 was in fifth grade. At that time, Heller had been asked to teach a fifth-grade tech ed class, which is how he got to know these kids long before they were playing high school football.

“It’s also our offensive coordinator, Jason Janke, his boy is the quarterback (Jack Janke),” Heller said. “You just knew he was going to be a really good football player, even in fifth grade, coming up through the ranks in middle school and high school. This has definitely been a group of guys that we knew had a really good chance to be good at football.”

Heller said that he has begun watching the game tape of Catholic Memorial and that their size and athleticism have stood out to him. This season, Catholic Memorial has only played one close game, a 29-27 win against Brookfield Central in the first game of the year on Friday, Aug. 20. Since then, the Crusaders have won every game by at least 23 points. Both coaches spoke about playing their brand of football, sticking to who they are, and letting the chips fall where they may.

“I’m just really excited for the kids and the community to have an opportunity to go down to Madison and watch a really good football game,” Heller said. “I’m very confident in our ability to give anyone a good football game and I like our chances this Thursday.”

The state championship-bound Ellsworth Panthers posed for a picture with students who made the long trip to Marshfield to see their favorite team defeat Freedom, 46-7. The Panthers play Thursday night at 7:30 p.m. at Camp Randall Field in Madison against Catholic Memorial. Photo by John McLoone.

Ellsworth choir students sang the National Anthem prior to Friday night’s WIAA Sectional Final in Marshfield. Below, the Panther cheerleaders fired up the crowd near the close of the game. Photos by John McLoone. 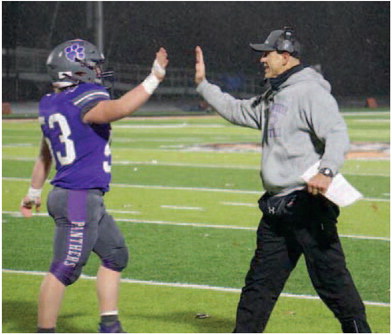 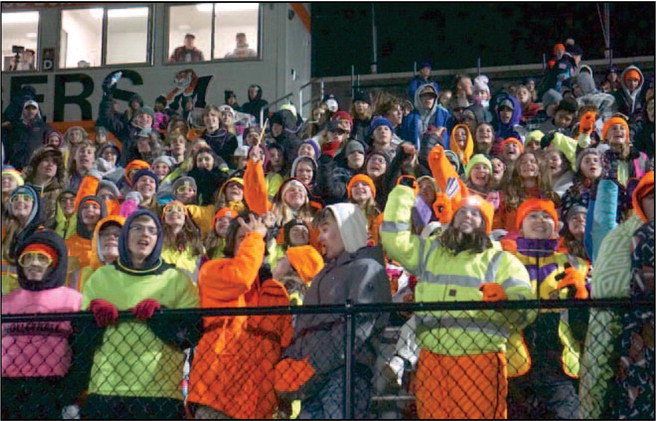 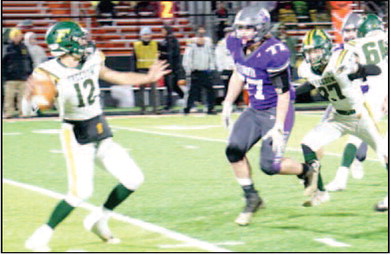 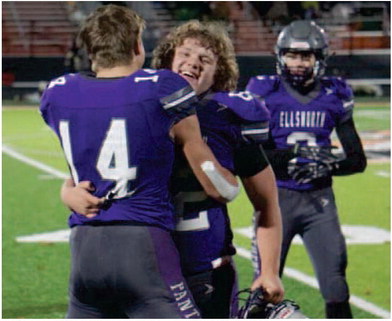 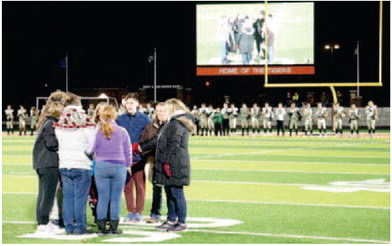 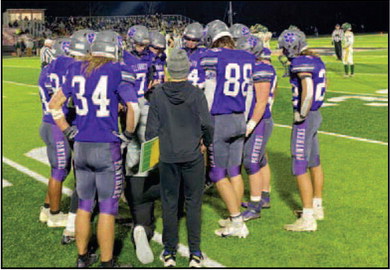 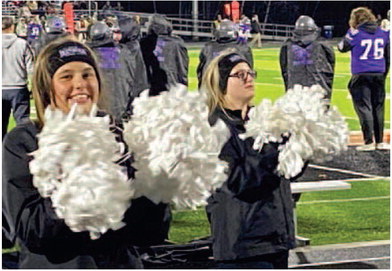 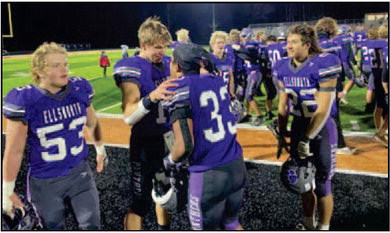