Graetz’s route to get to George Mason University is the culmination of a long athletic career, a majority of which has been overseen by RFHS volleyball head coach Sara Kealy. Graetz was a four-year varsity starter for one of the best volleyball programs in Wisconsin. However, Graetz and Kealy go back much further than just a high school career.

In fifth grade, Kealy got her first experience with Graetz as a young athlete. According to Kealy, one of the first things that she told Graetz and her family was that she needed to play competitive volleyball in the offseason if she wanted to become a dominant player.

“I told her she needs to go play more competitive volleyball,” Kealy said. “So, she left after that sixth-grade year and went to play Kokoro Volleyball Club. She was there for her sixth-grade year through her sophomore year of high school.”

After her sophomore year, Graetz decided to play for Minnesota Juniors and played there before her senior year and will likely play there again this winter. Both Kokoro and Minnesota Juniors are highly competitive volleyball organizations for middle and high school girls to compete in outside of the regularly scheduled school volleyball season.

Graetz’s dedication to improvement through outside volleyball programs such as Kokoro and Minnesota Juniors was one reason she was selected as one of four varsity captains for the 2021 season. She joined senior Dani Lien, senior Maddy Doerre, and junior Morgan Kealy. It was Graetz’s second selection to be a team captain, she also earned that role in her junior season of 2020.

Throughout her four years of high school, coach Kealy stated that Graetz’s growth as a player was slow and steady. She continued to improve at a consistent rate each season.

“It was slow and steady,” Kealy said. “She came in with some pretty strong skills and was on a roster in 2018 where she could be the fifth option on offense and not have the pressure of it. In terms of our set distribution, people were getting more opportunities than her, but she was taking advantage of the opportunities that she got.”

When she came in as a freshman, she was playing with some of the most elite players in Wisconsin, players that eventually went to Division 1 schools to continue their volleyball careers. Because of that, she was immersed in a competitive, but pressure-free environment as a young high schooler, which helped her grow as a player. As she got older and those upperclassmen graduated, it was a natural fit for Graetz to take their place.

“As she continued to grow and get better and other players graduated, she slid into those roles,” Kealy said. “Her versatility has been such an asset for her. Every year she has gotten better.”

Graetz’s versatility was on full display throughout her four years as a varsity starter at River Falls. In her freshman year, River Falls was running a three-middle offense. In that year she gained experience at both the outside and middle positions. During her sophomore year, she played middle exclusively. In her junior year, she played outside exclusively because they needed more strength at that position. In her senior campaign, she moved back to the middle before shifting around late in the season because of Brianna Brathol’s injury.

“Her game is so well rounded, she could play middle or outside in college,” Kealy said. “I think a lot of that will depend on who is returning to the George Mason roster next year.”

According to coach Kealy, Graetz’s skill set will translate to the college level. She has played with multiple Division 1 athletes throughout her four years as a varsity player at River Falls. In doing so, she has the unique experience of already working with top-tier college players while still being at the high school level.

“She has had players around her that are just as good as what she will see at that (Division 1) college level,” Kealy said. “I think because we play so fast, that transition to college won’t be as hard.”

George Mason University is a school that is having a down year as a volleyball program. Currently, the George Mason Patriots are 5-22 for the 2021 season, including a 3-13 record in conference action. However, it’s a Division 1 school that is playing strong competition. Coach Kealy stated that she thinks Graetz can have an immediate positive impact on the program.

In high school, coach Kealy was a volleyball standout herself. She was an All-American and was the player of the year in her state. Even with all of that raw talent, Kealy stated that when she got to the collegiate level, the coaches still made changes to her game so that she could become an even more refined, technical player. Kealy stated that Graetz will likely have the same experience and will continue to get better at the Division 1 level and will have leadership skills that translate too.

“Even though she will translate well to the next level, the game continues to change,” Kealy said. “I think she will learn and grow and adapt. And speaking to her leadership, the thing that makes her a good leader is that she has the ability to relate to people. She knows when to lighten the mood and when to be serious. People genuinely like her and that makes her a strong teammate.”

When the Graetz family was looking at external volleyball organizations, the Minnesota Juniors group was marketing themselves as an organization that would travel throughout the United States playing in the major volleyball tournaments. Some of those major qualifiers that Minnesota Juniors played in were in cities like Atlanta, where college recruits often went to watch matches.

Those additional opportunities certainly paid off, as Graetz attracted the eyes of recruits for George Mason University. On Wednesday, Nov. 10, she agreed to play volleyball for the Patriots on a full athletic scholarship. Graetz will begin her freshman season at George Mason in the fall of 2022.

“I really enjoyed having her all four years,” Kealy said. “She was a really good player for me, and she was comic relief exactly when we needed it. She got better all four years and will have an impact at the next level.”

Haley Graetz signs her letter of intent to play volleyball at George Mason University starting in the fall of 2022. She is joined by her dad, Matt, her mom, Beth, and her grandparents and her aunt behind her. Graetz signed on National Signing Day, which was on Wednesday, Nov. 10, at the River Falls High School. Photo courtesy of Sara Kealy

Haley Graetz (#4) smiles during the final high school volleyball match of her career, which was the state tournament game against Brookfield Central at the Resch Center in Green Bay on Thursday, Nov. 4. Graetz stands near senior Maddy Doerre (#13) and Brynn Johnson (#6). 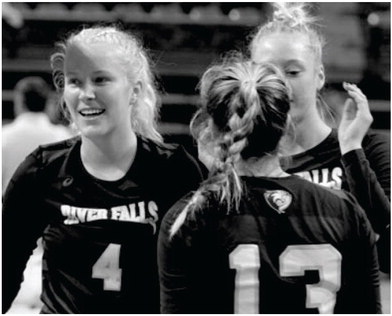