The Ellsworth Panthers football team is slated to compete against Catholic Memorial in the Division 4 State Championship game on Thursday, Nov. 18, at 7 p.m. in Madison. The road to the state title game has been full of excitement for this particular group of Panthers.

The 2021 season began with high expectations, whether the coaching staff and players would say it or not. Coming off of an undefeated season in 2020, the Panthers’ season was cut short because of the COVID-19 pandemic. No football state championship game was held in Madison and therefore, no state champion was crowned for the 2020 season.

Ellsworth began the 2021 campaign with the slogan of “unfinished business,” which has been talked about by Panthers players and the coaching staff throughout the season. The first game of the season for Ellsworth was at home against Superior. In that game, the Panthers put on full display their dynamic offense, specifically the rushing attack. In that game, the Panthers had 409 rushing yards which came from Jack Janke, Bo Hines, Max Grand and Ashten Quade. Ellsworth defeated Superior 50-22.

The second game of the year was on the road against West Salem. Although Ellsworth was leading that game late in the third quarter, inclement weather ended the game early and the game was officially removed from both teams’ records because it was never completed.

The steamrolling performances for the Panthers continued in their week four and five games. The Panthers hosted the Somerset Spartans on Friday, Sept. 10, in a game that Ellsworth won 53-0. One week later, Ellsworth hosted Gale-Ettrick-Trempealeau. It was another blowout win for Rob Heller’s squad. They took care of business in a 53-8 victory to advance to 4-0 for the season.

Late in the second quarter, the Panthers were trailing on the road in front of a loud, hostile Osceola fan section. The home field fans were quickly silenced when Janke connected with Grand on a 45-yard touchdown pass with 90 seconds remaining in the first half to take a 22-20 lead into the intermission.

Ellsworth fought off several Osceola attempts at a comeback. The Panthers left Osceola with a 36-26 win in what was their closest game of the season, improving their record to 5-0.

The final game of the regular season was at home against the Amery Warriors on Friday, Oct. 15. A majority of Ellsworth’s starters only played in the first half, as the Panthers took a 38-0 lead in the opening two quarters. The dynamic Ellsworth offense compiled 408 yards of total offense en route to a 57-0 victory to finish the regular season 8-0.

Despite finishing the regular season with an 8-0 record, the Panthers received the #2 seed for their respective bracket. The #1 team was Northwestern, who entered the playoffs with a 9-0 record. They officially played one more game than the Panthers because Ellsworth had the West Salem game cancelled due to weather.

Louie Jahnke of the Ellsworth Panthers makes a hard hit on the Freedom kick returner, Gavin Greiner, during the Sectional Final game on Friday, Nov. 12, in Marshfield. Photo by Gaylen Bicking

the first-round playoff game 40-6 to advance to the Level 2 playoffs.

The Level 2 game was also against a familiar foe. The Panthers hosted the Osceola Chieftains on Friday, Oct. 29, in a game where the winner would face the #1 seeded Northwestern Tigers. Ellsworth fell behind 14-0 to the Chieftains early in the first quarter. As soon as Ellsworth began to face adversity, Heller’s roster responded by scoring 46 unanswered points to take a 46-14 lead in the fourth quarter against Osceola. Ellsworth finished the game with a 46-27 victory.

The Level 3 game was on Friday, Nov. 5, on the road against Northwestern. The Panthers traveled three hours to compete against the Tigers in a game that many Ellsworth players thought they should have been playing in Ellsworth, with the Panthers as the #1 seed.

Senior Ellsworth running back Max Grand stated after the game against Northwestern that many players on the team came in with a chip on their shoulder, wanting to prove that Ellsworth should have been the #1 seed.

Ellsworth did all of that and then some. The Panthers outscored Northwestern 30-7 in the first half and essentially ended the game in the opening two quarters. Northwestern and staff on the sideline could be heard talking about Ellsworth’s incredible speed on the offensive side of the ball.

The Tigers couldn’t compete with the speed of Grand, Janke and Quade. The threeheaded offensive monster accounted for all seven of the Panthers’ touchdowns in the Level 3 playoff game against Northwestern. The Panthers’ 54-13 victory advanced Ellsworth to the Level 4 playoff game, the Sectional Final, on Friday, Nov. 12, at Marshfield, a neutral site, against the Freedom Irish.

The Level 4 game against Freedom was expected to be a close, highly competitive game between two great teams. However, Ellsworth’s dominance made the game look anything but competitive. The Panthers scored four unanswered touchdowns in the first half of action. Two of which were defensive touchdowns, courtesy of Quade playing defensive back. He made two pick-six interceptions within two minutes of each other.

The Panthers rode the stellar defensive performance to a 46-7 victory against the Freedom Irish. The win punched Ellsworth’s ticket to the State Championship game on Thursday, Nov. 18, at Camp Randall in Madison. Kickoff is slated for 7 p.m.

Panther coach Rob Heller hosts the WIAA Level 4 Championship plaque over his head as his Ellsworth team charges to the celebration after Friday night’s win over Freedom in Marshfield.

The Ellsworth celebration spilled out into the plaza area at the Marshfield High School football stadium as team members were photographed with the WIAA Level 4 Championship plaque following the Panther 46-7 vicotry over Freedom. Photo by John McLoone. 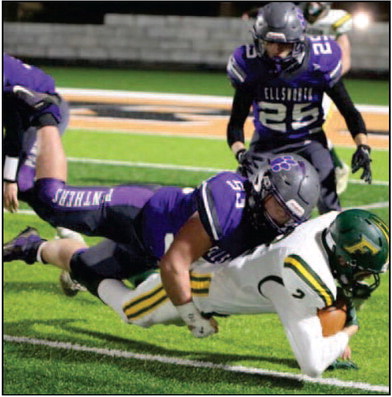 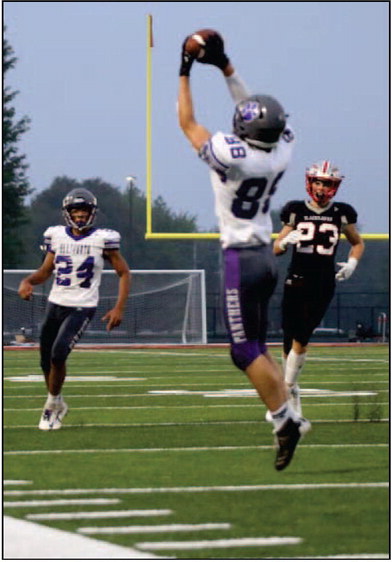 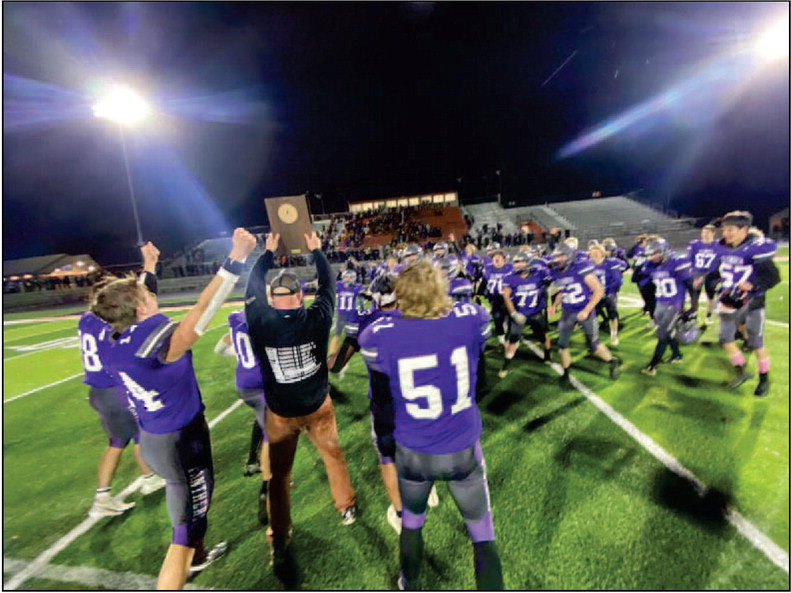 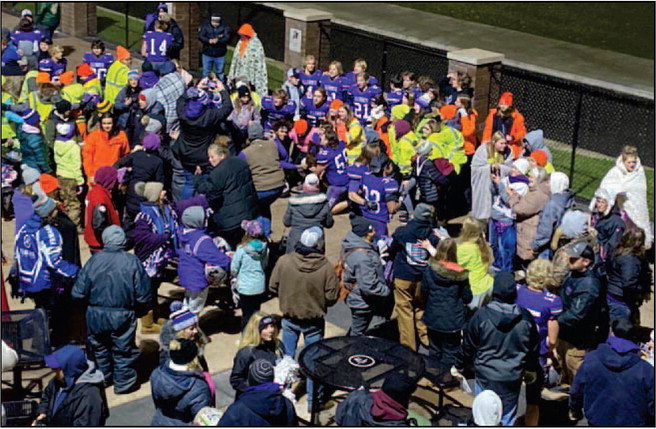