On Friday, Nov. 19, hundreds of members of the Ellsworth community gathered in the high school gymnasium to welcome home the Ellsworth Panthers football team, which competed in the Division 4 state title game the night before against Catholic Memorial.

Throughout the entire football season, at both home and away games, the Ellsworth fan section has been filled to maximum capacity. Even at playoff games such as Northwestern, Marshfield and at Camp Randall for the state title game, Ellsworth fans showed up in droves.

That remained true even after the state 2112 state championship loss against Catholic Memorial. At the welcome home even at the high school, the stands in the gym were full of supportive community members waiting for the football team to get off of the busses.

As the players and coaches made their way off of the bus and into the gym, the crowd stood up and applauded the team as they made a single file line on the far sideline of the gym. Once everyone had filed in and the audience had paused their applause, Ellsworth Athletic Director Ann Huppert introduced the team and spoke about how much great feedback she’s received about the integrity and character of every member of the football team.

“With this team, I’ve had officials, athletic directors, coaches, people in the community, bus drivers, people at the hotel, continuously say what an amazing bunch of kids they are,” Huppert said. “They’ve said they’re respectful and nice on and off of the field. They’re always doing the right thing.”

Huppert spoke about how the players and coaches are always willing to interact with people in the community. Whether it be fans, young kids that want to be like the football players, or just people in the Ellsworth community, the players continue to make other people a priority.

One anecdote that Huppert provided was about senior wide receiver Ashten Quade. According to Huppert, a student approached Quade and said that this individual had a younger cousin who was going to have a birthday party, and that it would mean the world if Quade could make it to the birthday party.

Quade not only showed up to the party, he stayed for two hours, played football with the younger kids, signed footballs, took pictures with all of the kids and was generous with his time, even for someone he didn’t know.

“It blows my mind how all of these guys can take that time and give back, with all of the success and everything they’ve been doing, to give back,” Huppert said.

The last thing that Huppert said was that the new state runner-up trophy – not counting all of the wrestling trophies – will be the fifth major trophy to go into the Ellsworth display case. After Huppert was done speaking, she handed the microphone to head coach Rob Heller.

Heller began his comments by talking about the state runner-up trophy, which got accidentally broken on the bus ride back from Madison.

“So, the story behind the trophy, I’ll take the blame, I was getting greedy, I hadn’t had my time with the trophy,” Heller said. “Coach Janke handed over the trophy and I reached out and grabbed it by the ball. Like a well-trained running back, once I have my hands on the ball, I don’t let it go. At that moment, there was a small traffic jam in front of us, the driver hits the brakes, and off comes the ball. I’ll take full responsibility.”

Heller spoke in a joking, lighthearted manner about the whole incident. He got a good laugh from the crowd while telling the story. The good news is that the WIAA is going to replace the trophy and there is no harm no foul. Heller continued with the jokes, as the first football-related thing that he said was in regard to Catholic Memorial’s recruiting ability.

“I’d like to congratulate Catholic Memorial on a hell of a recruiting class,” Heller said as he received roaring applause from the Ellsworth crowd. “I wish all 21 out of the 23 players the best of luck on Saturdays (college football game days).”

He proceeded to thank the other coaches, the managers, the students who volunteered for the team, especially with audio and video equipment. Heller thanked the ball boys and all of the younger kids who helped with the team this year.

“Just a few more things, I want to thank our coaching staff, these are the best guys in the whole world to work with, they worked hard every weekend and to say they put in the time is an understatement,” Heller said. “They do a lot of the grunt work and I get a lot of the credit. They put hours into our game plan and our practice plan and all of that stuff.”

Heller also made sure to thank the girlfriends, wives and significant others who allow the coaches to spend time away from home while dedicating hours and hours every week to the football program.

“Football season is tough on those people, and they do a wonderful job,” Heller said. “We’re fed well and taken care of by our significant others, and I know I and the other coaches appreciate that as well. They’re a part of this program that go unseen and they do a bunch of work as well, so thank you very much.”

He also addressed the game against Catholic Memorial and what it took to get to that point. According to Heller, he’s known this group of seniors since they were in fifth grade and to see them get to this point is something special for him.

“When I got up here a coach said to me that there were some really talented kids in this class,” Heller said. “He couldn’t have been more right. I’d like to thank the seniors for all of their hard work in the program. When they found the program as freshman, compared to where they’re leaving it, to say they’re leaving a mark on the program is a significant understatement. They’re leaving a huge footprint. Thank you, seniors, very much.”

The people in Ellsworth showed up and filled the stands one final time for the 2021 iteration of the Ellsworth Panthers football team on Friday, Nov 19. This Panthers roster is a team that, under the direction of coach Heller, featured some of the most talented athletes that the town of Ellsworth has ever seen. This year’s team will always be remembered as one of the greatest in Ellsworth history.

Ellsworth Panthers head coach Rob Heller speaks to the large crowd of Ellsworth supporters inside the high school gym on Friday, Nov. 19, during the Ellsworth welcome home event. Beside Heller is the broken state runner-up title, and he is flanked by members of the 2021 Panthers football team. Photo by Reagan Hoverman

Hundreds of members of the Ellsworth community showed up to support the Ellsworth football team when they returned home from state on Friday, Nov. 14. Photo by Reagan Hoverman 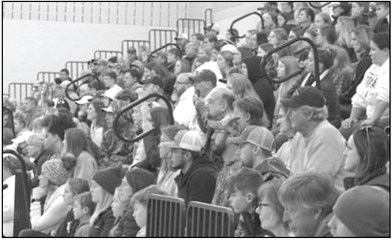