After Ellsworth lost 21-12 against Catholic Memorial – a private school powerhouse football program – in the state championship, many references could be heard on the field talking about what was a David and Goliath matchup, and quite honestly, that’s exactly how the game felt.

It was a matchup between two ends of the spectrum on Thursday, Nov. 18, at Camp Randall Stadium in Madison for the Division 4 state title. First, there was Ellsworth, a small town of approximately 3,000 people that has a team good enough to get to the state title game once every couple of decades. A town that represents the everyday working-class individual. On the other side, there was Catholic Memorial, an elite private school that holds a Waukesha address and can recruit from the greater Milwaukee metropolitan area. The game began with Ellsworth kicking the ball to the Catholic Memorial Crusaders. The Crusaders began their first drive of the game at the 31-yard line. After a few plays, Catholic Memorial faced a third and eight with the ball spotted at midfield. Quarterback Rory Fox threw a nine-yard out route to Antwan Jones, who moved the chains with his first down grab on the Ellsworth sideline.

On the ensuing play, Fox handed the ball off to running back Corey Smith who broke loose on a 41-yard touchdown run to give the Crusaders a 7-0 lead less than two minutes into the game. Then, in a decision of pure guts – or brilliance – Catholic Memorial decided to onside kick less than two minutes into the game. It was the perfect onside kick. Ellsworth wasn’t expecting it and Catholic Memorial got a fortunate bounce that allowed their special teams to recover the ball and give the offense another possession while keeping Ellsworth’s dynamic attack on the sideline. Ellsworth head coach Rob Heller spoke about the surprise onside kick.

“That caught us totally off guard,” Heller said. “We actually had a reverse return called so we had our guys deeper, and they just – it was a hell of a time. It caught us off guard and had the wrong play called, that’s on me. If you want to beat a team like that, you’ve got to win the turnover battle.”

After Catholic Memorial recovered the surprise onside kick, the Crusaders marched down the field and capped off the six-play, 34-yard drive with a five-yard touchdown rush from Fox. The PAT gave the Crusaders a 14-0 lead over Ellsworth less than four minutes into the game.

Ellsworth senior wide receiver Ashten Quade runs by two Catholic Memorial defenders as he scores on a 13-yard touchdown run during the state championship game on Thursday, Nov. 18, at Camp Randall Stadium in Madison. In the background, Ellsworth head coach Rob Heller puts up his arms in celebration of the Panthers’ first points of the game. Photo by Reagan Hoverman

Ellsworth head coach Rob Heller hoists the Division 4 State Runner-Up trophy on the field at Camp Randall Stadium on Thursday, Nov. 18. Senior running back Max Grand stands next to Heller as they show the trophy to the Ellsworth fan section. Photo by Reagan Hoverman PANTHERS

Ellsworth’s senior running back Max Grand returned the kickoff to the 44-yard line of Ellsworth where the Panthers began their first offensive drive of the game. On second and 14, senior wide receiver Ashten Quade broke free on a 22-yard rush as he essentially carried Crusader defenders on his back for yards after contact. A few plays later, Ellsworth was in a fourth and five at the Catholic Memorial 33-yard line. Senior quarterback Jack Janke handed off to Grand who got stuffed after three yards, which turned the ball over on downs to the Crusaders.

Catholic Memorial’s dynamic offense marched down the field and again scored. This time it was Fox who connected with Obacoso Allen down the sideline for a 27-yard touchdown pitch and catch to give the Crusaders a 21-0 lead with 1:37 remaining in the first quarter.

Later in the second quarter, Ellsworth was able to get a stop on fourth and two which essentially kept the Panthers in the game. The ensuing Ellsworth offensive possession was dominated by Janke and Quade. The biggest play of the drive was when Ellsworth was near midfield on second and short. Janke dropped back to pass and connect with Quade deep over the middle who went up over a Crusader defender, made a spectacular catch by hauling in Janke’s throw for a 39-yard reception. On the next play, Quade got to the edge and scored on a 13-yard rush to put the first points on the board for Ellsworth. The two-point conversion attempt was no good, making the score 21-6 in favor of Catholic Memorial.

On the next drive for Catholic Memorial, Fox tried to connect with one of his receivers but Janke jumped the route and picked off Fox to give Ellsworth possession midway through the second quarter. The 53-yard five-minute Ellsworth drive was capped off by a one-yard touchdown run by Janke which was followed by an unsuccessful two-point conversion. Janke’s touchdown made the score 21-12 in favor of Catholic Memorial.

That was the score going into halftime and it was also the score at the end of the fourth quarter. Neither team could get going in the second half and the game quickly turned into a defensive battle with both teams forcing multiple turnovers in the final 24 minutes of action. When all was said and done, Catholic Memorial had defeated Ellsworth 21-12 to win the Division 4 state title.

The only points that Catholic Memorial scored in the game were all in the first quarter. Ellsworth’s defense pitched a shutout in the final 36 minutes of the game. However, the three-score deficit was too much for the Panthers to overcome. Coach Heller spoke about his defense and how they held the Crusaders to zero points in the final three quarters.

“I said to the guys, we shut that team out for three quarters,” Heller said at Camp Randall after the championship game. “You hate to think of the ‘what ifs’ but those kids battled like I’ve never seen a football team battle before. That’s a great football team over there and for us to come down from little ole Ellsworth and give that team a game like that, I’m extremely proud of these boys.”

However, one of the most overlooked aspects that swung the game in favor of Catholic Memorial was their ability to have players play only one side of the ball. The Crusaders had their kids playing either offense or defense, not both. That way they could stay fresh while the other unit was on the field.

“They’re a talented group and they’re the best football team we’ve faced all year,” Heller said. “They did a good job taking away Ashten (Quade), Max (Grand) and Jack (Janke) tonight. Like I said, the turnovers were big tonight and I’m just really happy with the way the kids competed. We can’t use (the private school recruiting factor) as an excuse, but it’s a little bit unfortunate we come from a town of 3,200 and they’re coming from a metropolis outside the Milwaukee/Madison area. It is what it is. We just have to come down and compete. I’d take these guys against anybody, anywhere, anytime.”

After the game was over and both teams had been given their respective medals and trophies for first and second place, Ellsworth gathered as a team in the endzone, and each player or coach who wanted to speak got their opportunity. The first to speak was offensive coordinator Jason Janke, who addressed the private school and public-school topic.

“I’ve been coaching longer than all of you guys have been alive, once they did this thing where you got a town of 2,000 people and you play against Waukesha, and the coaches association has said this, if you get down here (to Madison) it’s a gold ball (a state title),” Janke said. “You get down here as a public school, it’s a gold ball. You’re the best Division 4 team that’s a Division 4 team in the state of Wisconsin – by a long shot. You guys battled these guys like no one else has, and some of those schools did have Milwaukee in front of their name. You guys did a hell of a job. What a ball game. I wouldn’t trade you guys for anything. If you’re going to come down here and be a David, there’s nobody I’d rather be with. You played for each other and that is something nobody can ever take away. Nobody can ever take this (trophy) away. I love you guys.”

When Janke was done speaking there were tears in the eyes of not only many of the players, but also some of the coaches. It was an emotional end to one of the greatest seasons in the history of Ellsworth football. Janke, Quade, Grand, and the rest of the Ellsworth roster – despite losing in the championship – cemented their legacy as one of the great teams in the history of the school district and they have the hardware to prove it. 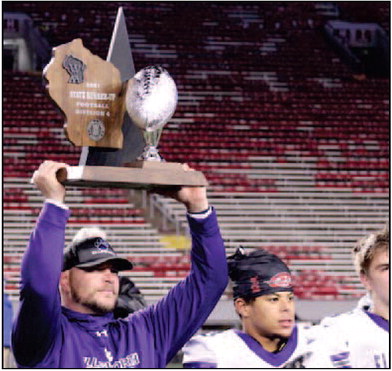