The Prescott girls basketball team has begun the season 1-1 after defeating Eleva-Strum 8958 on Tuesday, Nov. 16, in the season opener and then falling to Hudson 57-39 on Friday, Nov. 19 in the second game of the regular season.

The opening game against Eleva-Strum was an impressive display of offense by Prescott. The Cardinals came out and put up an impressive 44 points in the first half, outscoring Eleva-Strum 44-28 to take a 16-point lead going into the intermission.

Part of the reason for the lopsided halftime score was the efforts of Isabel Matzek, who eventually finished the game with 19 points on an efficient 4-5 shooting from the floor. In addition to that, Matzek shot 3-4 from the threepoint line, she also added two points from the free-throw line.

Matzek and the Cardinals began the second half on another significant scoring run. The Cardinals posted 45 points in the second half en route to an 89-58 blowout victory in the nonconference season-opening contest. It was a total team effort from the Cardinals, as three players were in double-digit points for the evening. In addition to the aforementioned Matzek, Rylie Radloff and Katrina Budworth were the double-digit scorers for the evening with 11 and 10 points respectively.

The 89-point performance for the Cardinals was sparked by efforts on the defensive side of the ball. Prescott tallied 21 steals in the victory, 10 of which came from the combination of Budworth and Maddie Rundquist, who each snatched five steals in the win.

Efficiency from the floor also contributed to the high-scoring Prescott performance. The Cardinals shot 27-51 from the floor and 7-21 from the three-point line. The victory moved Prescott to 1-0 for the season after the home opener on Tuesday night.

In the second game of the season, Prescott hosted the visiting Hudson Raiders, a Division 1 program coming off of a season in which the Raiders made an appearance in the WIAA Division 1 State Championship game against Germantown, a game that they lost 63-48.

However, the Friday night matchup was a chance for Prescott to test their program strength against a quality Division 1 opponent. It’s important to note that the Prescott Cardinals were missing two regular starters in the Hudson matchup due to illness, Lila Posthuma and Erin Boatman, two post players who make an impact on the game defensively, especially on the glass.

The game began as a low-scoring defensive affair that saw both teams make multiple turnovers in the opening minutes. The aforementioned Budworth scored Prescott’s first points of the game when she drove to the basketball and got fouled going up for a layup. Budworth went to the line and buried both free throws to give the Cardinals a 2-1 lead in the opening minutes.

After forcing a turnover on the defensive side of the ball, Prescott ran a fast break, drove into the lane, kicked the ball out to senior guard Brynley Goehring who proceeded to bury a three from the corner to give Prescott a 5-1 lead. Hudson answered with a layup by senior center Kira Young. She was fouled on the layup and converted the and-one play at the charity stripe to cut the Prescott lead to one. Moments later, Young again converted on a layup to take the lead. Hudson added two more points to take an 8-5 lead which forced a Prescott timeout.

Coming out of the timeout, Prescott went on a small scoring run to tie the game 12-12, after Goehring made a three-pointer from the top of the key to tie the game with six minutes to go in the first half. More turnovers by the Cardinals were the driving factor in Hudson finishing the half on a 10-6 run to take a 22-18 lead into the intermission.

At halftime, Goehring led the Cardinals in scoring with nine points, followed by Budworth with six. The biggest reason for Prescott’s deficit was the number of turnovers and offensive rebounds allowed, which gave Hudson’s junior forward Grace Lewis multiple second-chance opportunities that she took advantage of en route to her seven first-half points.

The deciding portion of the game came in the opening three minutes of the second half when Hudson went on a 7-0 scoring run to take a 2918 lead which forced another Prescott timeout. From there, Hudson played dominant basketball and finished the game with a 57-39 victory over the Cardinals. Second-chance opportunities and turnovers gave Hudson too many extra opportunities which led to the 18-point Prescott defeat. After the game, Cardinals head coach Joan Korfhage spoke about the loss.

“I thought we put up a good fight tonight, even with two of our bigs out with illness,” Korfhage said. “Lila (Posthuma) is a six-footer and Erin (Boatman) is 5’11” so a lot of our height was out. Rebounding was a focus of ours tonight, but we’re a lot smaller than they are. We knew that was going to be a downfall for us, we worked hard, but it didn’t work out.”

Throughout the entire contest, Prescott struggled with not turning the ball over. The issue was a result of multiple factors. The Cardinals were missing two regular starters, Hudson is a Division 1 school, and they’re also a strong defensive team.

“It’s definitely early-season rust too,” Korfhage said. “They’re a good defensive team and they apply a lot of pressure. We haven’t seen that type of pressure yet this year, but we probably won’t see anything like this again.”

The driving offensive force in the game for Prescott was Budworth, who regularly got to the rack and was getting foul calls and getting to the free-throw line. Her offensive consistency was a positive takeaway for Korfhage.

“She’s aggressive and doesn’t mind getting knocked around going to the basket,” Korfhage said. “We’re a push the pace offense, and being two girls down tonight, that affected it because normally we have more girls that we’re going to run through.”

According to Korfhage, both Posthuma and Boatman are scheduled to be back and healthy for the first Middle Border Conference matchup of the season on the road against Altoona. That game is scheduled for Tuesday, Nov. 23, and is slated to begin at 7 p.m.

Prescott junior guard Katrina Budworth scans the floor as she prepares to drive into the lane on Friday, Nov. 19, against the Hudson Raiders. Photo by Reagan Hoverman

Junior guard Izzy Matzek of the Prescott Cardinals holds the ball on the left wing as she looks for an open teammate to pass to. Photo by Reagan Hoverman

Junior Center Rylie Radloff tries to get inside post position against Kira Young of Hudson, the starting senior center. 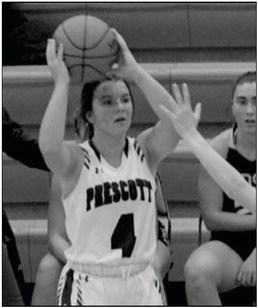 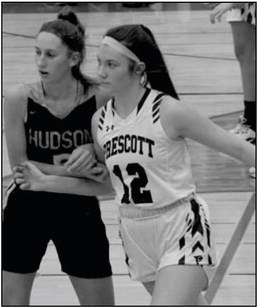