RIVER FALLS – The River Falls High School Marching Band won the AAA division state championship in October at UW-Whitewater with its program “Down the Rabbit Hole.” They not only won their AAA division, but brought home awards for best musical presentation, visual presentation, percussion and color guard.

Many of the students have been part of the marching band for their entire high school career. Senior flute player Marissa Keller said, “I definitely think it was one of the best decisions and I for sure don’t regret joining when I was a freshman.”

This year the marching band had a great track record of winning during their competition season. They won every competition and completed the final state competition with an undefeated year.

The band performed five songs and the entire show lasted about eight minutes. During their performance, the band goes through about five movements and prepares weeks ahead of the competition.

They start practicing for their season as early as possible in August. In between competitions, which number seven to ten in one season, they are performing at high school events as well.

Trumpet player Gwen Adams said, “We will have drill weeks and we spend some of the time on the music and some on the movements and those practices are five days during the week for nine hours each day and we do that twice during the season.”

Aside from drill weeks, they have practices each week, sometimes before school. Being a part of the marching band can be a big commitment; however, the students all enjoy the intensity of it when they are competing.

“The competition puts more drive into us and it definitely motivates us,” said senior Mason Chrest, who plays the snare drums.

Senior students shared their favorite memories from this year's season, and from the past four years of being part of the marching band.

“Since we won state, all the seniors got to ride on the fire truck down Main Street and then the underclassmen were in buses behind us and everyone lined the streets welcoming us back. That was super fun,” said Adams.

Another one of their favorite memories is the bonding and traditions in which they participate during their season.

“Before we go on, all the sections get together and they have their own traditions and that is one of the best parts and just the bonding aspect of it,” said trumpet player Ava Redmond.

Each senior plans to continue playing after graduating high school; they all feel that music has become a big part of their journey and lives and hope to find a way to keep playing in their futures.

Bryan Jaeckel, in his 18th year, is the RFHS instrumental music director. Alex Plum was co-director of this year’s ensemble, which boasted about 95 students.

The Marching Wildcats have brought home 22 Wisconsin State Marching Band Championship titles in the past 35 years. They have also performed nationally over those three decades, with shows at the Fiesta, Outback and Gator Bowls, the Youth In Music Band Championships in Minneapolis and the Bands of America – Super Regional in St. Louis. 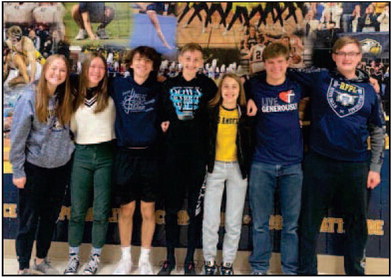