The River Falls High School girls basketball team has struggled in its opening two weeks of the season, starting the year 0-3 with losses coming against Somerset, Red Wing and Hastings.

After the season-opening 68-48 loss on the road against Somerset, River Falls traveled to Red Wing on Friday, Nov. 26, and Saturday, Nov. 27, to compete in the annual Red Wing Tip-Off Classic.

The first game that the Wildcats played was on Friday afternoon against Red Wing. In that game, the Red Wing Wingers got out to a hot start, putting together multiple scoring runs in the first half which propelled Red Wing to a significant lead. The River Falls offense wasn’t able to compete with that of the Wingers. When the game was over, River Falls walked off the floor in a 60-38 defeat.

Because of the loss on Friday, River Falls was placed in the consolation bracket for the second day of the tournament and faced Hastings in the 1 p.m. game on Saturday afternoon. The opening minutes of the game between the Raiders and the Wildcats were competitive. After River Falls sophomore Jordan Torrez hit a running layup to cut the Raiders’ lead to one point, Hastings freshman point guard Keagan McVicker made a driving layup off the glass to take a 12-9 lead. After a made free throw and another layup by McVicker, Hastings had a 15-9 lead with 11 minutes remaining in the first half.

River Falls battled back, scoring nine of the next 11 points in the game. The final points of the scoring run were scored by River Falls sophomore Lilly Burke, who buried a deep three to take an 18-17 lead over the Raiders which forced a Hastings timeout with seven minutes to go in the first half. Both teams played the next six minutes nearly even, as the game was tied 23-23 with 70 seconds remaining in the first half.

That’s when Hastings freshman center Hailey Strain grabbed an offensive rebound, got fouled, and made a turnaround jump shot in the lane to take a 25-23 lead. The free throw by Strain converted the and-one which gave the Raiders a 26-23 halftime lead. The threepoint deficit for the Wildcats was the closest they’ve been in a game at halftime this season.

In the opening minutes of the second half, the Raiders’ lead grew to 34-26 after senior power forward Lilly Nuytten made a driving layup to give Hastings an eight-point lead which forced a timeout by River Falls head coach Ian Sticht with 12 minutes remaining in regulation. Needing momentum, River Falls came out of the timeout but missed their first three-point attempt by junior Ella Peters. An offensive rebound by Burke kept the possession alive. Burke kicked it out to Peters who buried a deep three on her second try of the possession to cut the lead to 34-29.

However, Hastings’ McVicker responded with a three-pointer of her own to once again make the lead eight points at 37-29. In the second half, whenever River Falls was starting to make a run, Hastings and the duo of McVicker and Nuytten kept the Raiders’ lead intact. Both teams battled throughout the final 10 minutes of regulation, but when all was said and done, the Raiders left the floor with a 52-44 victory against River Falls, which moved the Wildcats’ record for the season to 0-3.

The biggest difference in the game was turnovers and inefficient shooting from the River Falls offense. Although no official game stats were available, River Falls coach Sticht estimated that his team shot somewhere in the 25% range from the floor. The Wildcats also turned the ball over too many times which often led to easy Hastings buckets in transition. After the game, Sticht spoke about the loss.

“There were certainly some stretches there where we were doing what we want to be doing,” Sticht said. “A little bit of pressure and some immaturity showed with some of those things we were trying not to do. We went back to some of those bad habits. A couple of players got in foul trouble early, and that made other players have to do things that they’re not as comfortable with out there.”

While bad habits and foul trouble were both problems for the Wildcats in the game against Hastings, the main takeaway was the shooting percentage for the afternoon. Sticht spoke candidly about the shooting.

“Our shooting percentage was probably pretty terrible,” Sticht said. “There was a long stretch of the game where we got looks, we wanted and we felt like they were good looks, but the ball didn’t go through the basket.”

Defensively, River Falls struggled to stop the aforementioned Newton, a tall inside post player that dominates the paint, rebounds well and gets to the free-throw line approximately 10 times per game. She was a driving force in the Raiders’ eight-point victory over River Falls.

“We gave them too much of what they wanted to do,” Sticht said. “With their big lefty inside, she had a lot of points and we gave them too many second-chance opportunities. Our defensive rebounding isn’t as good as it needs to be.”

Perhaps the most astounding fact about the RFHS girls basketball team is that there are no seniors on the roster and there are only four juniors. To say the team is young and inexperienced is an understatement. Sticht said they can’t use that as an excuse this year.

“I think people think it’s an answer, but (the girls) have been playing basketball a really long time,” Sticht said. “The court is the same length, it’s still five-on-five, we make that an excuse too easy. Certainly, I think that does play into it in close situations. It’s not an excuse we can use, but I do think it played into some of the mistakes out there.”

One of the true bright spots for the Wildcats was the play of sophomore Lilly Burke, who provided valuable minutes and scoring off of the bench for River Falls. Sticht spoke about her play after the game.

“She is doing what we want her to do,” Sticht said. “I think she had some great looks, and she is such a good pure shooter, the ball just didn’t go in. I don’t think she forced anything offensively.”

He also stated that playing in the Red Wing Girls Basketball Tip-Off Classic is a great way for the team to see some teams that they normally wouldn’t play in the regular season. In addition to that, teams such as Red Wing and Hastings serve as good competition to prepare for Big Rivers Conference action later this season.

The next game on the schedule for the River Falls girls basketball team is on Friday, Dec. 3, at home against Hudson. That game is slated to begin at 7:15 p.m.

River Falls junior (#12) Ella Peters receives cheers from teammates and coaches as she is announced as one of the starters against Hastings at the Red Wing Tip-Off Classic on Saturday, Nov. 27. Photo by Reagan Hoverman

Keyah Strop of the River Falls girls basketball team takes a short corner jumper during the Wildcats’ game against the Hastings Raiders. Photo by Reagan Hoverman 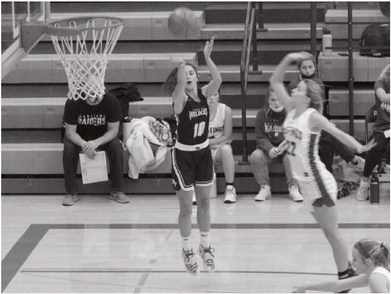 Most Read
News
Local Church Leads by Example
SPOTLIGHT ON Our Savior’s Lutheran For 138 years, Our Savior’s Lutheran Church has stood as a pillar in the Stanley community. Affiliated...
News
Stanley Rod and Gun Club joins with Otter Lake Boosters for a fun filled day at Otter Lake
Taking place Saturday Jan. 21 at Otter Lake, the Stanley Rod and Gun Club together with the Otter Lake Booster Club held an ice fishing contest, with ...
News
Stanley Community Association’s first Bingo of the Year is Fun for the Whole Family!
It was a packed house at the Stanley Community Association’s first Community Bingo of the year. While it may have been a chilly night, inside the com...
News
A full house at SCA Community Bingo
Public Notices
Stanley-Boyd Police Reports
Dec. 31 2:37 a.m. A traffic stop was conducted for moving violations, with the result that Ryan Micke, age 24 of Stanley, was cited for o...
News
Legion Post 112 gets new members
Stanley American Legion Victory Post 112 Commander Bruce Wozniak recently swore in new members Ben Niedzwiecki and Brandon Heifner. “The emblem o...
News
S-B Winter Formal Dance Courts
The sophomore court for winter formal at Stanley-Boyd. Shown in top row, from left are Mykel Wirtala, Lauren Potaczek, Queen Aaliyah Allard, and Bella...