It was a cool morning on Thanksgiving Day, the wind was brisk, music was playing, volunteers were putting on the finishing touches, Deputy Chief David Wilske was organizing the safety teams, the turkey was greeting, and second street was… fairly empty?

The strangest part of the morning, arriving at 7:30 to get pictures and there were not a lot of pictures to be taken at that time. 8:10 hit and there were still whispers of “where is everyone?” Sure, there were a couple hundred people out in the cold, but the street looked very empty compared to the number of people that have been out for previous Gobble Gaits.

8:26, suddenly, the street and side streets are packed, like the runners all teleported in at the same time. 8k and 2k folks all raring to go and then dead silence. The silencing of several thousand voices, in the open, on second street is quite impressive and not easy. The announcement was simple, that Blake Zak was about to sing the anthem, and that’s all it took to have the hush fall over the crowd. Zak did well with his rendition and the race was started.

In 2018, Gobble Gait had its record registration year, 3,144 runners signed up. 2021 missed that mark by 112. 1,469 people signed up for the 8k and 1,563 for the 2k for a total of 3,032. Also, it did look as though most of the registrants showed up to run. The line of people making their way from the start to hang a left at Graphic Design and go under the railroad bridge had so many people, the lead runners of the 2k, which is 1.2 miles, were already coming back before everyone left the starting area.

The 8k racers, running just under five miles, started crossing the finish line around the 25-26 minute mark. First to cross for the guys was David Nogle, then James Sorenson and third for the guys was Noah Brenny, all from Hastings.

For the ladies, McKenzie Buck crossed first, followed by Alana Dinger of Woodland Park, Colorado then Salena Butler of Hastings. Buck did not give the information of what town she was from.

Mayor Mary Fasbender, an organizer of Gobble Gait, filled in the blanks for this year. “It is normal on a colder day for people to come closer to race time, many families are there with small children in strollers, so I am sure they arrived later.”

That is a wise and experienced answer to the question of where did everyone suddenly come from?

Mayor Fasbender also commented on the amazing volunteers that help pull off the event. “It takes a village to put on an event as such, however we can brag because over the last 23 years more than 90 %of the same people have been retuning to volunteer. As far as the core committee now, with help of HFS and staff it’s actually ongoing throughout the year. Having more of HFS resources will help us be more efficient and sufficient in creating aa better event for the needs of our community.”

Now, the best part of this story. Gobble Gait is a fundraiser for Hastings Family Service. According to the information shared, the hopes from the committee is, once the final bills are paid, the amount of money donated will go up, but they won’t know for sure until well after press time. As it was put, the safe number to go with is over $118,000 raised for Hastings Family Service. $118k! and that number could still go up! That is incredible! That doesn’t even count any food donations collected. Since 1998, Gobble Gait has raised over $1.5 million and over 25k pounds of food.

Mayor Fasbender ended with, “coming off a pandemic, this is so wonderful for our mission and the need for our local people who need assistance.”

Unless noted by the photo, photos by Bruce Karnick. Drone photos taken under the supervision of a certified drone pilot per FAA 107 license requirements. 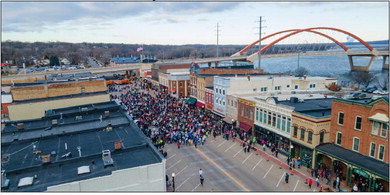 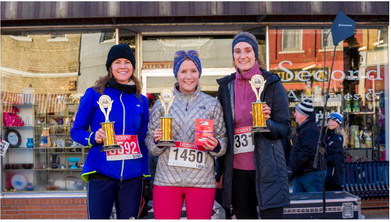 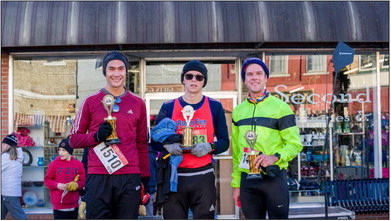 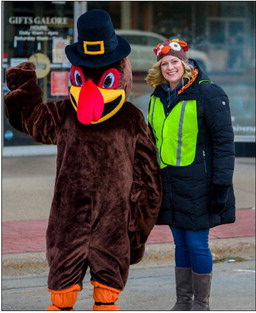 The Gobble Gait mascot and Melissa Freiermuth were out early to greet as many people as they could as they arrived. The Turkey took the opportunity to take pictures with people and every once in a while, sneak in a dance. 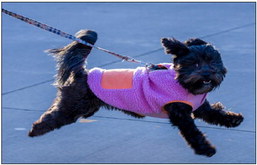 Even the dogs got excited to run! Dozens of four legged friends were found on the course with their human running partners. They all looked adorable, but not quite as adorable as this little one caught in stride near the finish line. 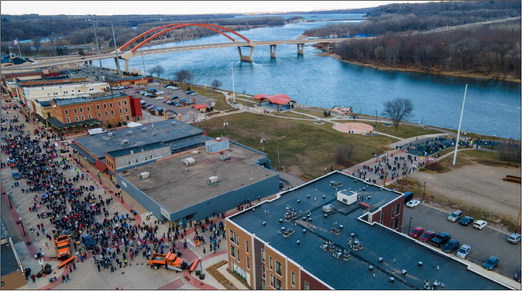 An aerial shot of the first turn of the course shows the sheer amount of people that participated in the race this year. 3,032 people registered to participate nearly breaking the record set in 2018 of 3,144.

The second tradition for the Hastings High School Wrestling Team is to take a group picture in front of Lock and Dam Eatery before the start of the Gobble Gait. Every wrestler is encouraged to join if they are home for the event. Photo Courtesy of Sherri Leflay 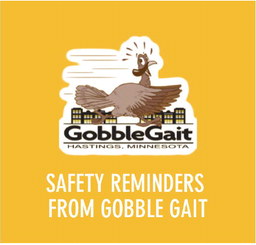