Lilly Nuytten’s clutch performance at the charity stripe was key in helping the Raiders maintain their lead in the final minutes of the game against River Falls.Photo by Bruce Karnick
News
Sports Raiders Basketball gets rolling

The Raiders basketball teams had their first rounds of competition this past weekend. First, the boys traveled to Bloomington Jefferson where they participated in a multi team scrimmage. No score was kept, and it went all morning giving coaches an opportunity to play all grade levels. Returning one man show Michael Mitchell looked great in the preseason outing as did many of his teammates. Many of the underclassmen seemed to up their game for this, trying to earn a shot at making the Varsity roster. One thing is for certain, this team should be fun to watch all season long.

The boys start their regular season on Tuesday, December 7th against Park of Cottage Grove at home at 7:00 then they travel to Apple Valley on the 10th and Woodbury on the 21st. Both of those are 7:00 games as well.

The Raider Ladies Hoops participated in a four-team tournament in Redwing this weekend. The other three teams were River Falls, Goodhue and Redwing. Friday’s games had Redwing vs River Falls and Hastings vs Goodhue. Redwing defeated River Falls to move on to the championship game. Goodhue vs Hastings was a complete mismatch. Goodhue kept the full court press on the entire game and lead 50-10 at the half. The final was 82-28 Goodhue. Goodhue was the section 1AA runner up last year finishing 17-5 with a head coach that has been in place around 20 years. Hastings Head Coach Sheri McLeod is the fourth head coach for Hastings in five years and they have had five days of practice.

Saturday, for third place, Hastings took on River Falls. Hastings seemed to control the pace of play the entire game having a 26-23 lead after the first half. River Falls never really cut into that lead even when three key Raiders, Keagan McVicker, Lilly Nuytten and Maggie Schlottman all quickly amassed four fouls each. Schlottman eventually fouled out of the game with just a few minutes left, but that only elevate the rest of the team to work a little harder to hold the lead. Hastings won 52-44 moving to 1-1 on the season.

The ladies will host Columbia Heights on Tuesday, November 30, then host Apple Valley on Friday, December 3, then they travel to Eagan on Monday the 6th and St. Anthony Friday the 10th. All four games are scheduled for a 7:00 p.m. tip. 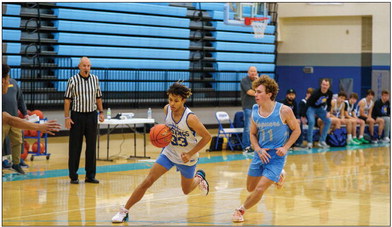 Michael Mitchell brings an excitement to an outstanding core for the Raiders boys basketball team this season. Photo by Bruce Karnick