Dick Rinehart and Cyndi Cashman hosted a meeting in September 2015 when their crusade to make the Highway 29/Happy Valley Road/County Road FF intersection safer began to pick up speed. The meeting was held where the intersection is located and is now newly reconstructed with safety precautions in place. Photo courtesy of Cyndi Cashman
News
At last, a safer intersection

RIVER FALLS – After many months of construction, State Highway 29 from River Falls to Prescott is finally open. The Wisconsin Department of Transportation’s extensive project, which began May 10 and ended in November, included removing and replacing existing pavement, culvert pipes and guardrails. It also included modifying three intersections :•County Road E — Changing the bypass lane to a dedicated left-turn lane;

traffic and a right-turn lane for westbound Highway 29 traffic, plus reconfiguring the channelizing island for right turns from southbound County Road FF;

For town of River Falls resident Cyndi Cashman, the reconstruction was the culmination of years of lobbying for a safer intersection. One of the community’s biggest concerns was safety and the new updates have ensured that for those using the highway every day.

“I was going home and there was so much going on at this intersection, always so many accidents and someone was going 55 mph and when they hit me it pushed me over into the other lane and I instantly thought, ‘we have to do something about this,’” she said.

Cashman reached out to local businessman Dick Rinehart and the two of them took the intersection safety issue on together, spreading awareness of the dangers happening at this particular spot. Reinhart had concerns because many of his family members lived close to the intersection.

The two took the issue to the city and the township and presented the facts to the community. “We arranged for a community meeting at the Comforts of Home right by the intersection and the community really came together and agreed on this issue,” said Cashman.

Rinehart was a longtime supporter for updates at this intersection. In a town hall meeting in March 2016 Rinehart said, “The intersection was built many, many years ago when the Foster farm was there; the environment we are living in now, and how it’s grown, makes that intersection dangerous.”

The two consistently spread awareness of the dangerous intersection and advocated at meetings for updates such as turn lanes, lighting, speed limit reductions. Cashman proposed installing a street light to improve visibility for not only pedestrians, but for turning vehicles.

After the issue gained more support and momentum, the pair started a Facebook group called “Safety in Numbers,” where people would post ideas and document crashes they witnessed; according to Cashman, it helped people come together to try to find a solution.

The group ran into some obstacles along the way because the intersection is located in a spot where any decisions must be agreed upon by the township, the city of River Falls and the county. Not to mention Highway 29 is a state road.

“Because it was all up to the city, the township, the county and the state, they didn’t always work together on these projects but we decided to set up the town meeting and that was great and had a good response and they were great about listening to us,” said Cashman.

Many in the community were in favor of updating this specific intersection because of the reputation it held.

The city didn’t budget for the additional street light Cashman wanted, so they had to come up with additional funding on their own.

“So we had to pay for it ourselves because it was a city, a township and the county and the state and people kept saying they don’t work together on that,” she said.

It did not even take a week to reach the amount of funding needed for the street light’s purchase and installation, which came to $5,000.

“I was going to start a fundraiser and get that going on Facebook but within 20 minutes of leaving our meeting it was all paid for,” said Cashman.

Before the DOT took on its repaving and intersection reconfiguration project this year, the intersection had been updated with a digital 45 mph speed limit sign, the street light, a no passing zone warning painted on the westbound approach and now, turn lanes.

Cashman expressed her gratitude to everyone who has been a part of this change from the beginning when she took up the cause, she said. She also feels that the intersection is much safer and has seen a difference in the number of accidents.

“I just want Dick Rinehart, Lisa Weiss and Jeff Husby to really be thanked again from the community because they were such a large part of this project coming together and getting accomplished and they put in so much work,” said Cashman.

After five years of hoping to make a difference in this community, all involved have accomplished making this route safer to travel.

“Recently, the times we are in and how divided we are in today’s society and seeing how everyone really came together and worked together for this and how the city, the county and the township all came together, I think that really says something,” Cashman said.

A drawing of the intersection at 770th Avenue and County Road FF, where several accidents occurred before several safety measures were put in place, such as turn lanes. Drawing 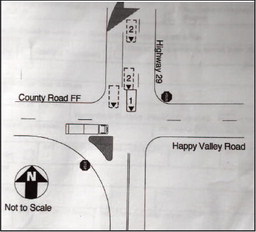 Most Read
News
Local Church Leads by Example
SPOTLIGHT ON Our Savior’s Lutheran For 138 years, Our Savior’s Lutheran Church has stood as a pillar in the Stanley community. Affiliated...
News
Stanley Rod and Gun Club joins with Otter Lake Boosters for a fun filled day at Otter Lake
Taking place Saturday Jan. 21 at Otter Lake, the Stanley Rod and Gun Club together with the Otter Lake Booster Club held an ice fishing contest, with ...
News
Stanley Community Association’s first Bingo of the Year is Fun for the Whole Family!
It was a packed house at the Stanley Community Association’s first Community Bingo of the year. While it may have been a chilly night, inside the com...
News
A full house at SCA Community Bingo
Public Notices
Stanley-Boyd Police Reports
Dec. 31 2:37 a.m. A traffic stop was conducted for moving violations, with the result that Ryan Micke, age 24 of Stanley, was cited for o...
News
Legion Post 112 gets new members
Stanley American Legion Victory Post 112 Commander Bruce Wozniak recently swore in new members Ben Niedzwiecki and Brandon Heifner. “The emblem o...
News
January High Five Award winner is a lifesaver
The January High Five Award was presented to Jane Burzynski, owner of Modern Beauty. Her passion for her customers, her dedication to the community, ...