Hockey doesn’t get much more dramatic than this.

The Wolfpack then skated out the final seconds before erupting in celebration.

“It was really exciting,” Jensen said of her game-winning goal. “We were really working for it the whole game so once we finally got it was one big celebration.

“We usually wait around the net a lot of the time then the puck just popped out and boom, right in the net,” Jensen explained.

Park sophomore Tori Stepka did heroic work in goal, stopping a whopping 35 of the 37 shots she faced.

“Very intense game,” said Stepka. “It feels pretty good. I think it definitely helped that they are our rivals. We came out really strong and we had a lot of good energy, positive energy coming into this game. I think the momentum really helped, too.”

East Ridge and Park went back and forth in scoring through the first two periods. The Raptors took 1-0 and 2-1 leads only to see the Wolfpack battle back and knot the game each time.

Sam Miller scored Park’s sole goal at the start of the third period.

Park (1-3 in the Suburban East, 3-4 overall) skates at Hudson Thursday, then meets Irondale/St. Anthony Saturday at the National Sports Center. 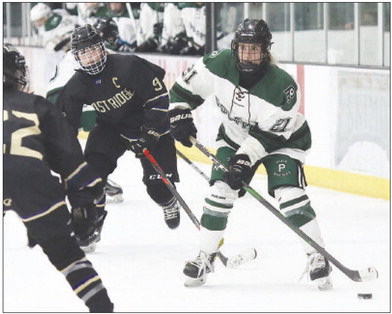 Park’s Sam Miller looks for an opening in the East Ridge defense in the third period of Park’s 3-2 win Tuesday. Photo by John Molene