After graduating four starting seniors last season, there were some questions coming into the 2021-22 campaign about a nearly completely new starting lineup. Those questions are gone, as River Falls has started the season 3-0 and is tied for first place in the Big Rivers Conference standings.

The most recent contest for the River Falls Wildcats was on Monday, Dec. 13, at home against Rice Lake in a BRC matchup. When the final buzzer sounded, River Falls had defeated Rice Lake 66-49 to improve to 3-0 overall and 2-0 in BRC action.

In the opening minutes of the home game against Rice Lake, the action resembled a Big 12 college football game – nobody was playing any defense. However, that changed as both teams settled into the game and River Falls started to adjust to Rice Lake’s speed. Eight minutes into the first half, the game was tied 15-15.

The standout for Rice Lake in the opening minutes was junior guard Tyler Orr, who scored 10 of Rice Lake’s first 15 points. Orr’s scoring ability was on full display. He was attacking the lane and playing like a slasher, he was hitting deep three-pointers and he was hitting floaters at will.

Despite Orr’s efforts, River Falls was playing excellent team basketball. After back-to-back three-pointers by each team, the game was tied 18-18. That’s when River Falls put a scoring run together to take a 31-18 lead. The 13-point run by the Wildcats consisted of buckets from seniors Ethan Campbell, Jack Hirstein, Michael Schurman, and sophomore Jonah Severson. The late first-half scoring barrage by River Falls contributed to the Wildcats’ 34-23 halftime lead over the Rice Lake Warriors.

In the opening minutes of the second half, Schurman picked up his third foul, which sent him to the bench for several minutes. In his absence, Joey Butz and Hirstein picked up the tough assignments defensively. RFHS head coach Zac Campbell spoke about the quality minutes he’s received from his bench this season.

Even though Schurman missed significant portions of the late first half and early second half because of foul trouble, his offensive brilliance was on full display against Rice Lake. If a defender was bigger than him, he would break him down defensively and go to the rack. If the defender was smaller, he would back him down and make a post move to create space and score. Schurman finished the game with 16 points on 8-10 shooting from the floor. He also grabbed three rebounds and dished out four assists. Coach Campbell spoke about Schurman.

“He’s really difficult to defend because of his athleticism,” Campbell said. “For us, we’re trying to rein that athleticism in because he goes so hard sometimes, and we see him get in foul trouble. We’re asking a lot of him – take care of the basketball, defende the other team’s best, and score some for us too.”

When Schurman leaves the floor for River Falls, someone has to adopt the scoring load while he’s on the bench. In the Monday night game against Rice Lake, senior forward Ethan Campbell stepped up to the challenge. Ethan Campbell had seven points in a 90-second stretch approximately five minutes into the second half, which included a layup, a three-pointer, an offensive rebound and a tough contested shot. His effort helped put the game away for River Falls. Coach Zac Campbell spoke about Ethan’s performance.

“Ethan was great on offense, but his presence on the glass for us in the middle of the second half went a long way,” Zac Campbell said. “We got really stale with our rebounding.”

River Falls is now 3-0 overall for the season, including a 2-0 record in BRC action. Despite being undefeated, coach Zac Campbell said River Falls has yet to play a clean game.

“We haven’t played clean yet,” Zac Campbell said after the 66-49 win. “We’ve found a way to win three games and we still have work to do. We’re happy where we’re at right now. You saw tonight how many guys we’ve got that can shoot it. When we get to offensive flow and we get some of our bench guys in a better position on defense, I think we can hang with anybody in our league and our area.”

River Falls had four players score in double figures for the night. Leading the charge for the Wildcats was senior Jacob Landgraf with 17 points, Schurman followed with 16, Ethan Campbell had 13 and Hirstein had 12. The Wildcats shot an efficient 74% from the floor for the night.

The next game for River Falls is on Tuesday, Dec. 14, on the road against St. Paul Highland Park. That game is slated to begin at 7 p.m.

It was all smiles for River Falls seniors Kaden Rowekamp (left) and Ethan Campbell (right) during the 15-point victory at home against Rice Lake on Monday night to remain undefeated. 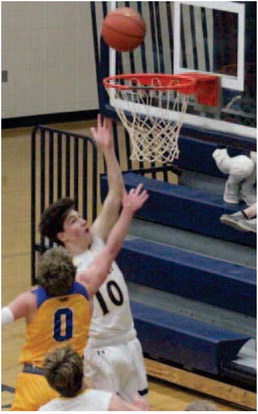