Here, a curb can be clearly seen at a driveway by one of the new roundabouts on Hwy. 316. It was the first heavy snowfall of the season, and the road was not plowed to full width with, nearly two feet or more of the road being occupied by snow at many spots. Photo by Bruce Karnick
News
Trucks, snowplows fuel Hwy 316 frusration

By Bruce Karnick and John McLoone

The rebuilt Hwy. 316 means a “learning curve” for Hastings residents, trucks navigating the roundabouts and even state snowplow drivers.

After the first large snowfall of the season, concerned residents called The Hastings Journal to voice their opinions on the new narrow roundabouts, stating that snowplows were having difficulties and semis were taking minutes to maneuver through.

Ficek said that MnDOT isn’t done with the project and that it’s keeping an eye on the situation.

The new compact roundabouts were also constructed in St. James, MN, but they’re a relatively new concept in the state. MnDOT’s website for the Hwy. 316 project has been updated with directions for truck operators on how to navigate the roundabouts (http://www.dot.state. mn.us/metro/projects/ hwy316/).

As part of the complete road rebuild, compact roudabouts were installed at Spiral Boulevard, Tiffany Drive and Tuttle Drive.

“The plow driver looked like he didn’t know what to do,” one caller to The Journal said Monday morning. “He was going back and forth, and he couldn’t put his wing out. They’re going to be knocking things over left and right.”

In the first couple plowing ventures, there reportedly have been mailboxes knocked down. Ficek said Monday afternoon that he hadn’t received a report back about plowing operations from the Friday-Saturday storm.

“I talked with our snowplow maintenance people before the storm. It’s new for the plow drivers, too. There’s going to be some adjustments they have to make,” said Ficek. “They’re going to get better at it.”

“The truck turn movements, that one thing we’re specifically looking at,” he said.

The medians in the roundabout are designed so trucks can drive over them.

“They’re supposed to go straight over that. These are compact roundabouts, and not everyone has encountered that before,” said Ficek.

A meeting with the Hastings Area Chamber of Commerce to help educate business owners and get project feedback will be held in January, he said.

“On any project where there is a big change, it’s going to take time. This looks nothing like it did before. There are adjustments that will need to be made,” said Ficek.

The Hastings City Counhe cil heard about problems with trucks and plows in the roundabouts in the public comment period at its meeting last week.

Ficek said MnDOT will be back out finishing the Hwy. 316 project in the spring.

Long time Hastings resident Ed Robinson reached out to the Journal with his concerns of Hwy. 316, a route drives multiple times a week. One of his concerns is the removal of snow on the center median and how the plows were very inefficient at doing it.

“I went through Saturday morning after the big snow, they had a little trail. I came back later in the day and they had gotten up on the median to plow but they had to See 316 Page 9 do the Virginia jig around all those little center posts. Then they had to come back and plow the roadway again because the snow from the middle went on the road,” he said shaking his head.

“On my way back into town, I also counted, there are 14 mailboxes on that side of the road. Well 12 now, because two of them were already knocked over by the plows,” explained Robinson.

Robinson added frustrations for following commercial vehicles. “Twice I was behind semis. They’re doing like five, got up to about 10 miles an hour. And they went all the way through the whole thing. I look back, there’s been 15 cars all lined up sitting there poking me. Someone is going to get in an accident because of that.”

“All these people that live on the Coborn’s side and want to go into Hastings, they take a right, then they go down to a turnaround, turn around, come back, adding more traffic to an already busy road. Everybody I have talked too just shakes their heads and said it’s just the dumbest thing they’ve ever seen. A lot of people are just going to start jumping the center median to turn left from their driveways,” added Robinson. 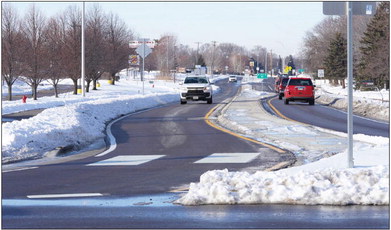 The center medians were mostly plowed, with the exception of the crosswalk access points, a key selling point to the safety aspect of the 316 plan. Photo by Bruce Karnick