Spring Valley/Elmwood freshman wrestler Lyndsey Stark gets an Ellsworth wrestler in position to be pinned as she looks up to check how much time is left in the match. Moments later, Stark got the pin and won the match. Photo by Reagan Hoverman
Sports
Ellsworth, SV/E wrestling compete in B-W triangular

On Tuesday, Dec. 14, both the Ellsworth Panthers and Spring Valley/Elmwood wrestling teams competed in a triangular meet at Baldwin-Woodville High School. The meet was another chance for wrestlers for both squads to get some great experience against familiar teams in the opening weeks of the wrestling season.

Ellsworth began the meet with a 57-21 win against Spring Valley/Elmwood in the opening matchup of the meet. For Ellsworth, it was a glimpse of what the team is capable of. Many wrestlers, including Ryan Matzek and Louie Jahnke, wrestled in true Ellsworth fashion – gritty, aggressive wrestling. After the meet, head coach Mark Matzek spoke about the experience.

“I was proud of the way my entire team faced adversity this past week and put themselves in a position to compete for the team win on Tuesday,” Matzek said. “The flu struck our team last week and we had to cancel practices and a competition. For many of my wrestlers, this past Tuesday was not only their first competition of the year, but they were also fresh from getting back from the flu. We even had a few kids still out on Tuesday.”

Ellsworth isn’t the only team in the area that has had more than its fair share of illness. Many teams throughout western Wisconsin have battled illness in the first month of the season – Ellsworth has been no exception. Matzek made sure to give credit to Baldwin, a team that wrestled a strong match against Ellsworth.

“I tell you this not to take anything away from Baldwin or make excuses,” Matzek said. “They have a good team and wrestled well. I am just stating the obvious that it would have been in our favor to have a full week of practice and competition before this meet. That wasn’t the case and the kids put themselves on the line and I am proud of them for their effort.”

The match marked the first dual meet of the year for Ellsworth. It was a learning experience, especially with a roster that had been depleted by sickness as much as any team in western Wisconsin. Matzek spoke about the technical aspects of the meet.

“Overall, our performance looked like our first dual of the year,” Matzek said. “Our hands were high and resting in the neutral position, we didn’t drive on top, and we were a bit lazy on bottom. All technical improvements that will be addressed this week.”

Although Ellsworth as a team had a tough time with Baldwin, there were a couple of wrestlers who stood out for Matzek, and truly represented what Ellsworth wrestling is all about.

“I was impressed with Ivan Veenendall, Anthony Madsen, Louie Jahnke and Ryan Matzek,” Mark Matzek said. “They wrestled Ellsworth style. They were always on the attack and were very physical. They competed like seasoned Ellsworth wrestlers.” In addition to some bright spots for Ellsworth, there was also progress for Spring Valley/Elmwood. Although head coach Gable Frandsen’s varsity roster lost both matches, he stated that the experience is still valuable for his team.

“We lost to Baldwin and also to Ellsworth,” Frandsen said. “At the Baldwin-Woodville meet, we were faced with some good competition and the team gained some great experience. SVE wrestling now has a baseline of what we need to work on for the upcoming Northern Badger tournament.” 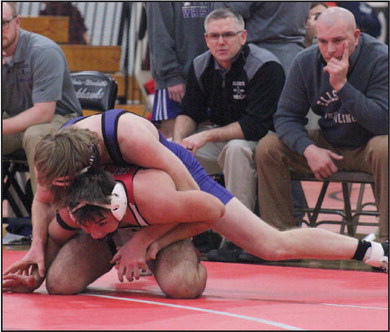 Ellsworth senior Eli Rohl makes a move on a Baldwin defender and wins position during a match in the 152-pound weight class. Photo by Reagan Hoverman

Most Read
News
Local Church Leads by Example
SPOTLIGHT ON Our Savior’s Lutheran For 138 years, Our Savior’s Lutheran Church has stood as a pillar in the Stanley community. Affiliated...
News
Stanley Rod and Gun Club joins with Otter Lake Boosters for a fun filled day at Otter Lake
Taking place Saturday Jan. 21 at Otter Lake, the Stanley Rod and Gun Club together with the Otter Lake Booster Club held an ice fishing contest, with ...
News
Stanley Community Association’s first Bingo of the Year is Fun for the Whole Family!
It was a packed house at the Stanley Community Association’s first Community Bingo of the year. While it may have been a chilly night, inside the com...
News
A full house at SCA Community Bingo
Public Notices
Stanley-Boyd Police Reports
Dec. 31 2:37 a.m. A traffic stop was conducted for moving violations, with the result that Ryan Micke, age 24 of Stanley, was cited for o...
News
Legion Post 112 gets new members
Stanley American Legion Victory Post 112 Commander Bruce Wozniak recently swore in new members Ben Niedzwiecki and Brandon Heifner. “The emblem o...
News
January High Five Award winner is a lifesaver
The January High Five Award was presented to Jane Burzynski, owner of Modern Beauty. Her passion for her customers, her dedication to the community, ...