The River Falls High School gymnastics season is underway and according to head coach Bridgette Lensing, season success will depend upon teamwork, experience, and each gymnast working to improve as an individual which will support overall team success.

Historically, the RFHS gymnastics team has had significant success, including excellent postseason performances at the state level, much of which has been overseen by Lensing. She spoke about this group of gymnasts that she has and what they bring to the table.“We have a well-rounded group of gymnasts this year, both age-wise and experience-wise,” Lensing said. “As coaches, it’s really fun to see each year and the new roles each gymnast takes on. Each grade level brings in its own dynamic which we are excited to see progress over the season. Regardless of age though, we have a group of gymnasts that are not afraid to step up, take charge or lead in different ways for their team.”

In many instances, there are one or two players or competitors who set the tone for a team and are the leaders of the team. In football, it may be a quarterback, in basketball, it may be a point guard. However, Lensing stated that in gymnastics, each gymnast plays a specific role that is critical to the team.

“Each member of the team brings different strengths that help us to be successful,” Lensing said. “You have team members who are cheering and encouraging from the sidelines who help to motivate and give fire to their teammates who are competing. The first gymnast in an event hopefully sets the tone for her teammates behind her, being aggressive, leading with confidence and performing with passion.”

While there may not be specific leaders in the gym, the best gymnasts on the roster typically lead by example and work to push younger or more inexperienced gymnasts to improve each day. Lensing spoke about the top athletes as well as the role players.

“Your top athlete, hopefully, continues to push themselves, in turn motivating and showing the rest of the team that hard work does pay off,” Lensing said. “Each member of our team has a role, roles may switch as the season goes on, roles may look different as the season progresses, but we are successful when everyone recognizes their roles and works their butt off to be the best they can be.”

For a team that has had considerable success throughout the last decade, it would be easy to establish lofty goals. However, Lensing and her coaching staff decided that if they focus on working hard, being accountable and being dedicated, then the results will come.

“We as coaches always have and hold high expectations for every member of our team,” Lensing said. “It’s our expectation that each member is not only working for their individual improvement and success, but the success of the team. We compete as individuals but finish as a team. As coaches, it’s our goal to develop hard-working, accountable and respectful athletes and individuals. Our successes are not handed to us, we reach them after we have put in the work, effort and dedication.” Similar to many other local teams, last season was negatively impacted by the public health crisis that either changed or completely canceled high school sports seasons. Lensing spoke about last season, the challenges, and how it makes this season all the better.

“It went as well as it could given the circumstances,” Lensing said. “We were thankful for every day we had in the gym and for every meet we were able to compete in. We were, however, restricted on how many individuals we were able to have on the team, so that was something new for us. However, we are really excited that this year we are able to have those team members back and love seeing them in the gym again. Our team feels complete.”

The River Falls gymnastics program has a history of success. Of course, talented athletes at a Division 1 school are the driving factor in that success but a talented, experienced coaching staff is not to be overlooked. Especially a coaching staff that has stayed together for a decade. Lensing and her staff have done just that.

“We honestly have the best coaching staff,” Lensing said. “Like our gymnasts, we all bring different things to the table that help in making not only our girls successful but our team successful. We have been coaching with each other in one way or another for over 10 years and we’re excited to see what this season has in store for us.”

Lexi Epstein of the River Falls Gymnastics team competes in the vault event at the home gymnastics meet on Thursday, Dec. 16. River Falls won the triple dual with a total score of 130.940, edging out second-placed Eau Claire, which finished with a team score of 129.875. Rice Lake finished in third with a score of 115.125. Photo by Reagan Hoverman 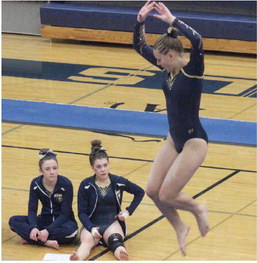 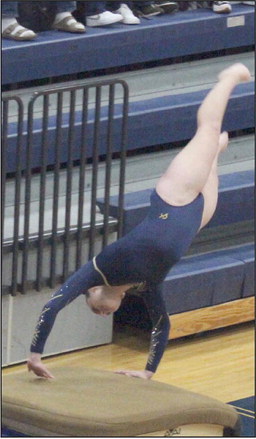