Meeting December 20 at City Hall, the Cottage Grove Plan Commission had but one main agenda item: an EAW application for Mississippi Dunes put forth by Pulte Homes. With comment open on the EAW through December 29 and the City Council set to potentially review the matter on January 19, the EAW for same contains some interesting information on a part of Cottage Grove history that is now largely past: the acquisition and development of Section 30 as a land grant, centered on the William Cowan residence that still stands off just off Grey Cloud Trail and 103rd Street, in Southwest Cottage Grove. The history of what is now southwest Cottage Grove has gone through many changes and subdivisions throughout history.

“The City of Cottage Grove is located between the Mississippi and St. Croix Rivers in an area historically known as the St. Croix Triangle,” the EAW states on page 156.

Going on to state that this entails modern day Washington and Ramsey Counties, the document homes in on the William Cowan property and its history, originally comprising a square known as “Section 30 or Township 27 North, Range 21 West.”

These coordinates, which may be unfamiliar to many, plat out the property’s general location on a surveyor’s map. With 10301 Grey Cloud Trail South designated as 300272113002 on parcel maps—further divided by dots into 30.027.21.13.0002 for the Section, Township, and other pertinent information, the EAW provides more information on the Willam Cowan property and its significance to Cottage Grove’s history.

“The first Euro-American settler in the Cottage Grove area was likely James Sullivan Norris, who staked his claim to a portion of Section 12 of Township 27 in 1843,” the EAW states. “Norris was followed by other Euro-Americans mostly from New England states, such as New York, Vermont, and New Hampshire.” Then citing historian Robert Vogel to state that “by 1855, Cottage Grove was one of the fastest growing rural townships in Minnesota,” the EAW states that the township of Cottage Grove “was officially organized in May of 1858, days after Minnesota achieved statehood.”

With Norris’ land located in part where the Whispering Pines Garden Center is today in East Cottage Grove, modern Cottage Grove consists of the township boundaries become a city, consisting historically of the township, East Cottage Grove as an agriculturally driven settlement, and the platted railroad village of Langdon, located in and about 95th Street South and West Point Douglas Road South as to its original platting, near and about Jamaica Avenue South.

Ok, you might say. I know about Langdon. So who was William Cowan, and what was his world like?

The EAW tells us. “This broader history of Cottage Grove is reflected in the history of 10301 Grey Cloud Trail,” it says. “”Today, the property addressed as 10301 Grey Cloud Trail includes a house and barn on 2.75 acres of land in the northeast quarter of Section of Township 27. For most of its history, however, the property has comprised a small portion of much larger parcels of farm land.

Acquiring the land from Peter Pfeifer in 1873, Willian Cowan was a native of Scotland and 56 years old at the time of purchase. Mr. Cowan was also married to a wife named Harriet, herself born in Canada and 45 years old in the 1875 Census.

With two daughters named Hannah and Harriet born in Scotland, three people with the names of John, Anna, and Harriet were residing with Mr. Cowan an this wife by 1885. But while a map of the property from 1886 shows a structure in the current house’s location, verification that this is the same structure as the current home is difficult to come by, at least at present.

“Possibly, this structure is the existing two-and-ahalf story, gable-roofed, limestone house,” the EAW states, also noting that, “no historic photographs of the property have been uncovered.” Going into further detail, the EAW notes that Mr. Cowan had sold most of his land by 1901, with the new owner listed on the 1901 plat map as “Security Trust Company,” with preliminary newspaper research suggesting that this was a company “based in St. Paul” and specializing “in backing mortgages and bonds.”

By 1912, Dorothea Fritz was the owner of the 200.95 acres formerly held by the Security Trust Company. Passing through several owners that divided the property of Mr. Cowan, the most recent owner prior to the golf course was Mary O’Boyle, who held the land title “from 1973 until at least the mid-1980s,” the EAW states.

With Mary O’ Boyle’s death and the sale of most of this land to become a golf course in 1995, the once broad agricultural land expanse was reduced to 2.75 acres at the intersection of Grey Cloud Trail South and 103rd Street.

Located outside the area proposed for development as Mississippi Dunes, the William Cowan property is a historical treasure, testifying to an important period in Cottage Grove’s development. history. 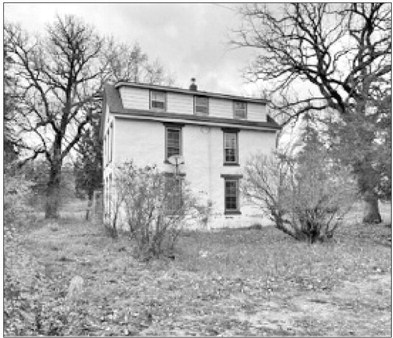 Included in the mandatory Environmental Assessment Worksheet (EAW) that went before the Cottage Grove Plan Commission December 20 is this picture of the historic William Cowan residence at 10301 Grey Cloud Trail South. Image by City of Cottage Grove.