Elmwood/Plum City senior Luke Webb dribbles the ball up the court during a home game against Spring Valley earlier this season. Webb has been dominant for the Wolves, averaging 25 points and 15 rebounds per game this season. Photo by
Sports
Local boys hoops roundup

Local boys basketball teams including the Prescott Cardinals, Ellsworth Panthers, Spring Valley Cardinals and Elmwood/Plum City Wolves are all competing in their respective conferences. Two months into the season, Prescott has established itself as one of the best teams in the state.

Compared to other teams, the Prescott Cardinals boys basketball team has had an unusually long break from games. The most recent game for Nick Johnson’s varsity squad was on Friday, Dec. 17, on the road against Somerset. In that game, Prescott rallied behind senior guard Jordan Malmlov’s 22 points, three rebounds and six assists to win 58-46.

The win marked Prescott’s seventh of the season. The Cardinals remain undefeated and tied for first place in the Middle Border Conference standings with Saint Croix Central. Both teams currently have perfect 4-0 records in Middle Border action.

The Prescott Cardinals offense is as modern as it gets in terms of playstyle. The Cardinals don’t play a traditional center, they play a five-out offense, they push the pace, and they live and die with the three-pointer.

Head coach Johnson has been confident throughout the season that he has seven guys who can go and get him 15-20 points on any given night. Officially, Malmlov leads the charge for Prescott with 21.6 points per game. Guard Brandon Stuart is second with 15 points per game and forward Dallas Wallin is in third with 11.9 points per game.

The highly potent Prescott offense has them averaging over 75 points per game. That, in addition to the undefeated 7-0 record, has helped the team be ranked as seventh in the state for Division 3 boys basketball, according to the Wissports weekly coaches poll. Conference rival Saint Croix Central is currently ranked sixth in the state.

The Cardinals will look to extend the winning streak on Wednesday, Dec. 29, on the road at the Hastings tournament where they will take on Irondale. That game is slated to begin at 5:15 p.m.

It’s been a tough season thus far for the Ellsworth boys basketball team. Going into the Menomonie High School Showcase, a two-day tournament the week after Christmas, the Panthers are 0-3 overall.

The schedule didn’t do Ellsworth any favors when they made the Panthers’ season opener against the then-undefeated Prescott Cardinals. In that game, senior Jack Janke hurt his ankle, and the report was that he wouldn’t be back to 100% for an undetermined amount of time.

Since that game, Ellsworth has struggled, most recently against Baldwin-Woodville, a game that the Panthers lost 67-44. Janke hasn’t played any minutes since that opening game against Prescott. He was their leading scorer and the leader of the team. The winless Panthers are currently in seventh place out of eight total teams in the Middle Border Conference standings.

Ellsworth will have a chance to begin to their turn season around on Tuesday, Dec. 28, against Black River Falls in the Menomonie High School Showcase. That game is slated to begin at 12:30 p.m.

The Spring Valley boys basketball team improved to 5-1 for the season after a 57-42 victory at home against Boyceville on Thursday, Dec. 16. The win moved the Cardinals into a four-way tie for second place in the Dunn-St. Croix Conference standings.

Spring Valley head coach Rob Bosshart has stated that they are missing one of their best players in Connor Ducklow, who was injured during the football season and has yet to play a single regular season basketball team. The Cardinals, who are currently 5-1 and in the heat of a conference title race, will get Ducklow back sometime in January or February, which will significantly improve an already talented roster.

If Spring Valley can hang around in the conference championship race for the next several weeks, Ducklow’s return could lead to a second consecutive conference title. The next game on the schedule for Spring Valley is on Tuesday, Jan. 4, at 7:15 p.m.

Similar to the Spring Valley Cardinals, the Elmwood/Plum City Wolves are also in the middle of a chase for the Dunn-St. Croix Conference championship with a 2-1 record in conference play and a 5-2 record overall.

The Wolves are part of that aforementioned four-way tie for second place in the conference standings. Elmwood/Plum City has stayed fresh throughout the holidays, as they played a game on the road against Cochrane-Fountain City on Tuesday, Dec. 21, which was a 58-43 victory for the Wolves.

The win improved the Wolves record to 5-2 overall, which in large part is due to the play of Luke Webb, who has been dominant in every phase of the game. On offense, Webb is averaging 16.4 points per game this season. On defense, he’s averaging an impressive 15.7 rebounds per game, not to mention his 2.1 assists per game.

Webb has done it all for the Wolves this season. His length and court vision make him a dominant high school player and that was on full display during the game against Cochrane-Fountain City. In that game, Webb had 25 points, 15 rebounds, four steals and three blocks en route to the 15-point victory. He was efficient shooting from the field, getting his 25 points on 10-21 shooting from the floor.

With Webb running the offense and anchoring the defense, it’s not hard to imagine how Elmwood/Plum City remains in the hunt for a Dunn-St. Croix Conference championship. The next game on the schedule for the Wolves is on Tuesday, Dec. 28, with an opponent that is still TBD. 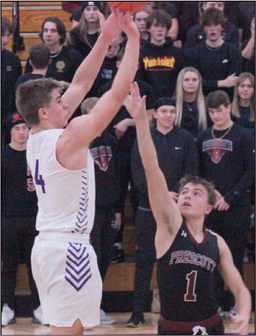 Jack Janke takes a three-pointer at the top of the key as a Prescott defender tries to contest the shot. Janke was injured during the game against Prescott and hasn’t played a game since then. His absence has contributed to the Panthers’ rough start to the season. Photo by Reagan Hoverman