Even without star senior point guard Michael Schurman, who missed two games due to illness, River Falls split two games and won its sixth game of the year before Christmas, something that only one other River Falls team in the last 15 years has been able to do.

The first game without Schurman was on Tuesday, Dec. 21, at home against Eau Claire Memorial, a team that went into the game ranked as a top-five team in the state for Division 2 basketball. The Old Abes defeated River Falls 5038. The second game without Schurman was a 64-37 victory, also at home, against La Crosse Logan on Thursday, Dec. 23. River Falls currently sits at 6-1 overall for the season.

The aforementioned Tuesday night game was a struggle for River Falls for multiple reasons. First, Eau Claire Memorial is one of the best teams in the state and features senior guard Will Boser, who will play college basketball next season at Concordia. Secondly, Schurman was a near gametime decision. His scratch from the lineup came approximately 45 minutes before tip-off. Because of that, RF head coach Zac Campbell didn’t have time to implement a new game plan and it was a scramble from the opening tip. Campbell spoke about Schurman’s absence.

With Schurman missing from the starting lineup against Eau Claire Memorial, the scoring load was essentially transferred to senior post player Ethan Campbell. In the first half, Ethan Campbell scored nine of River Falls’ 19 points. Going into intermission, the Wildcats trailed 24-19.

The fouls were his third and fourth of the game, which forced head coach Zac Campbell to take Ethan Campbell out of the game. He spent the next seven minutes on the bench in foul trouble. Zac Campbell spoke about how those calls changed the game.

“It was 100% a turning point,” Zac Campbell said. “We already have Michael (Schurman) out and then Ethan (Campbell) went out. A poor block/charge call put three (fouls) on him, and then we gambled out here to try to tip and it put him in a bad spot to get his fourth. That completely changed it. We have our top post presence out, we have our top guard presence out against a team that’s ranked fourth in the state, it was pretty darn tough to score the basketball.”

Once Ethan Campbell went to the bench in foul trouble the Old Abes began to pull away from River Falls. When the final buzzer sounded, the Wildcats trailed 50-38 and were handed their first loss of the season. The defeat marked the first River Falls home loss in 17 games, a winning streak that was earned over the course of 22 months. Before Memorial, the Wildcats had been unbeatable on their home floor for essentially two years. Despite missing Schurman, River Falls managed to keep the game close.

“We scrap enough to keep games close,” Zac Campbell said. “There is no doubt they have a ridiculous amount of talent. I thought our effort – I was so proud of our guys. We rebounded well against an athletic team. I certainly think the game offensively becomes easier if we had those two guys for an entire half.”

The second game of the week for River Falls was 48 hours later on Thursday afternoon when the Wildcats hosted La Crosse Logan in a non-conference game. Despite it being non-conference, the game was important for postseason section seeding, so it was one that River Falls needed to win for later in the season.

It was also the second consecutive game without Schurman, who remained out due to illness. However, this time Zac Campbell knew he would be without Schurman and was able to game plan with his coaching staff for the absence. River Falls came out of the gates firing on all cylinders.

The Wildcats began the game on a 17-0 scoring run in the opening eight minutes of action. River Falls was playing tough, physical defense and was rolling offensively. The bright spot was senior guard Jacob Landgraf, who scored eight of the Wildcats’ first 17 points, including two threepointers in the opening two minutes of action. The lethargic start for La Crosse Logan forced a timeout by head coach Sam Zwieg.

During a typical River Falls boys varsity game, a majority of the scoring is done by Schurman and Ethan Campbell. However, with Schurman out, Landgraf had an opportunity to take more shots and be more involved on offense. He took advantage of the opportunity, scoring 26 points during the game on 10-15 shooting from the floor.

His offensive explosion propelled the Wildcats to a 6437 blowout victory on Thursday afternoon in a game that was essentially decided in the opening eight minutes. After the game, Zac Campbell spoke about the win.

“Jacob (Landgraf) has a lot more game than what people see,” Zac Campbell said. “A lot of times it’s physical matchups, guys get physical with him and he gets his mind moving too fast. Tonight, he was able to play in rhythm which really helped.”

The additional day of preparation knowing that Schurman wasn’t going to be playing was critical for Zac Campbell and the rest of the coaching staff in preparing a fresh game plan for the available players.

“That day of prep was important,” Zac Campbell said after the win. “Also, we’ve had some tough starts to games like Hudson and Memorial where we came out slow. It was a big emphasis for us to put them on their heels right away and we did that tonight.”

The win was the Wildcats’ sixth of the year before Christmas, something that only one other boys basketball team at River Falls has been able to do in the last 15 years. Zac Campbell has his varsity squad in elite company, as they look to continue building what appears to be another special season.

“We talked about (that sixth win before Christmas) yesterday,” Zac Campbell said. “After the loss on Tuesday, we addressed it immediately. We talked about how we’ve got an opportunity to put ourselves in special territory.”

River Falls will compete in the Menomonie High School Showcase on Tuesday, Dec. 28, and Wednesday, Dec. 29. The first game for the Wildcats will be on Tuesday at 12:30 p.m. against Tomah. 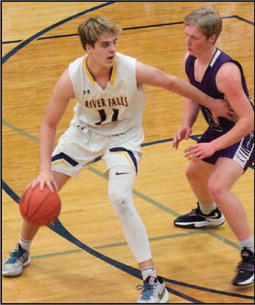 River Falls sophomore Joey Butz takes a jump shot near the lane during the home game against La Crosse Logan on Thursday, Dec. 23. Butz and the Wildcats defeated Logan 64-37. Photo by Reagan Hoverman