The scene looking toward Stanley in the aftermath of the December 15 tornado, classed as an EF2.Image courtesy of Steve Millen.
News
City officially notifies state of disaster as result of tornado

Proclamation needed from Governor Evers for any possibility of federal aid

In case there were any official bureaucratic doubts, they should be gone now. The City of Stanley suffered a disaster on December 15 due to a tornado, the City making a declaration lat- er ratified at the December 22, 2021 Common Council meeting.

Unfortunately, while said proclamation allows for such things as curfew and other municipal actions in the aftermath of a disaster like that suffered recently, the monetary damages sustained from the December 15th tornado don’t meet the threshold for the city government itself to qualify for financial assistance through the Federal Emergency Management Adminis- tration, or FEMA–but individuals may be in for a potentially better experience, pending an official declaration by Wisconsin Governor Tony Evers.

The difference lies in the word “individual, “as opposed to a governmental entity. The city government itself is out as not meeting the damage threshold, but those residing in a city or other area that is an officially declared di saster zone, can still make potential use of the Individuals and Households Program run by FEMA-pending an official disaster declara tion from the state, and signed by the President, that is. So is there a deadline to do so?

“It just depends on how badly the area is affected,” a FEMA staffer said by telephone explaining the process of getting aid to communities when asked as to a deadline for making the formal proclamation. Part of the process also involves the state agreeing to pay part of the damage costs, it was made known.

Notwithstanding the above, no such necessary by the Governor as related to the recent December 15 tornados at Stanley and else- where, had been posted to the official website at evers.wi.gov as of Monday December 27 at 5:18 p.m. The last executive order by the Wisconsin governor related to severe weather was made on July 29, 2021 and listed as Executive Order # 128 on the governor’s website, being related to “extreme weather, including heavy rainfall, large hail, straight-line damaging winds, and reported tornadoes.”

Should the necessary and similar declaration for December’s weather be made by Governor Evers and then signed off on by President Joe Biden, individuals seeking to apply for disaster assistance through FEMA, should do the following:

• Take photos of your damaged home and belongings

• Make a list of damaged/lost items  If you have insurance, file a claim with the company first. FEMA cannot provide as sistance for losses covered by insurance, with an insurance determination letter helping speed things along. Attempting to have FEMA and your insurance cover the same damages, is fraud.

If on the other hand you have no insurance or do but aren’t covered in full, the following documents will be needed:

• Proof of ID Shifting over to the commercial end of things, the U.S. small Business Association “provides low interest loans to help businesses and homeowners recover from declared disasters.” The business must be in a declared disaster area, the last such event for which Chippewa County was listed taking place in 2019 and related to extreme cold temperatures.

But whereas the recent disaster proclamation isn’t of help to the local government it- self in acquiring financial aid from FEMA, it is nevertheless entered here, pursuant to form: “WHEREAS, on Dec. 15, 2021 at approximately 9:15 p.m. a disaster, namely a tornado struck The City of Stanley; and WHEREAS, because of emergency conditions, the Mayor and City Council President are unable to meet with promptness; and WHEREAS, it is necessary and expedient for the health, safety, welfare and good order of the city to proclaim that emergency conditions exist; and WHEREAS, the disaster has caused the city to expend, commit and exhaust its pertinent available resources; and WHEREAS, the city requests state assistance and advises the State of Wisconsin of our emergency conditions; NOW, THEREFORE, pursuant to sections 323.11 and 323.14(4) of the Wisconsin Statutes, as Mayor of the City of Stanley, I do hereby declare that a state of emergency exists in the City. Emergency powers as permitted under state statute include:

• Authorize public works contracts in excess of $20,000 without advertising or bid.

This proclamation shall be in effect until such time as a quorum of the City of Stanley City Council can convene and ratify this disaster proclamation.

Al Haas, Mayor City of Stanley” The formalities done, the time to apply is now—for the Stanley Relief Fund as detailed on page 1. Should things change at the upper levels, we’ll let you know. 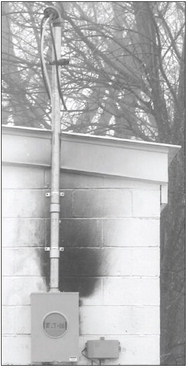 A repaired electircial mast awaits full grid hookup in the alleyway off East Maple Street after the December 15 tornado. Photo by Joseph Back.