At the annual Menomonie Holiday Showcase tournament on Tuesday, Dec. 28, and Wednesday, Dec. 29, the Ellsworth boys basketball team finished the event with an 0-2 record, including losses against Black River Falls and Edgar. The games were an illustration of what the team has been without star senior Jack Janke who was injured earlier this season.

For Ellsworth, the season was derailed before it even began. Halfway through the first game of the season, a Dec. 7 home game against Prescott, Janke went down with an ankle injury. He was their leader, their leading scorer and essentially served as a coach on the court for the Panthers. Without him, it’s been a struggle, to say the least.

Approximately one month into the season, Ellsworth is 0-5, including the aforementioned losses at the Menomonie Holiday Showcase over winter break. The first game of the tournament was a tough one for the Panthers. At halftime, they trailed Black River Falls 31-10 and had been largely ineffective on the offensive end of the court.

In the second half, something changed. The Panthers began moving the ball effectively, the defense was playing in rotation perfectly and Ellsworth began to chip away at the Black River Falls 21-point lead.

With three minutes remaining in the second half, Ellsworth had all but dismantled the massive Black River Falls lead. Ellsworth had cut the lead to single digits and at one point made it a one-possession game with under 90 seconds to play in regulation. Despite the heroic comeback attempt, the Panthers fell short and suffered their fourth loss of the season. After speaking to the team, head coach Jordan Petersen emerged from the locker room and provided postgame thoughts.

“It was a tale of two halves,” Petersen said. “I think in that first half we lacked a ton of energy and intensity. I don’t know what that is or was. We tried changing defenses, we tried changing offenses, but in that second half we competed with them. Those last four minutes were as confident as I’ve seen us play all year. That was huge and that’s what we’ve been fighting for. Finding some identity and some confidence for our guys.”

The Panthers hoped to ride some of that second-half momentum against Black River Falls into the game the following day against Edgar, a team that entered the game with a 4-3 record compared to Ellsworth’s 0-4 record. In that game against Edgar – for the most part – Ellsworth did continue that momentum. At the halftime intermission, the Panthers led Edgar 28-25. It was the first halftime lead of the season for Ellsworth.

“That first half we struggled taking care of the ball,” Petersen said. “We could have broken it open more. We had a four- or fivepoint lead at times and then we’d turn it over two or three times. The second half, the death of us was the second shot opportunities.”

In the second half, Edgar made a run and took control of the game. Four minutes into the second half, Edgar junior Teegan Streit made a corner three-pointer to take a four-point lead. Less than one minute later, Edgar junior guard Justin Davis hit a three from the top of the key to take a 41-34 lead. The quick 6-0 run for Edgar gave them a lead that was too much to overcome for Ellsworth. The Panthers battled back to make it a one-possession game with three minutes left but couldn’t quite get over the hump and never regained the lead. It was Ellsworth’s fifth consecutive loss to start the season.

“I keep telling the guys that we’re improving, we’re getting better and we just need to keep going,” Petersen said. “Sometimes I think when you get into a rut of losses guys tend to at some point give up, and I don’t think we will with this group. We just need to be consistent with taking care of the ball and defensive rotations.”

Petersen is objectively correct; the team is getting better and the statistics back that up. The two losses at the Menomonie Holiday Showcase were each decided by five points or less. Compared to the losses earlier this season which were 33-, 28- and 23-point losses. The loss of Janke, who was the team’s leading scorer last year, has significantly altered the first month of the season.

“We’re fighting to find our guys some confidence and identity as we lose Jack (Janke) here for a month or two,” Petersen said. “Finding roles, too. There are guys that have played with Jack (Janke) and have had different roles their entire life. It’s been a struggle for us.”

Janke’s injury during the season opener against Prescott was a tough pill for the Panthers to swallow. They watched their star player limp off the court and suddenly had to change their entire team identity. Petersen said it was a tough moment for his team.

For Ellsworth, the Panthers will continue to rally and work to improve every day and solidify roles in the absence of Janke. As for his future, according to team reports, Janke will be out for approximately one more month. The next game for the Panthers is on Tuesday, Jan. 4, at home against Middle Border Conference opponent Amery. That game is slated to begin at 7 p.m.

Ellsworth senior Spencer Schultz pushes the ball up the floor against Black River Falls at the Menomonie Holiday Showcase. Photo by Reagan Hoverman

Junior Samuel Kollbaum of the Ellsworth Panthers takes a contested jump shot inside the paint against the Black River Falls Tigers on Tuesday, Dec. 28. Photo by Reagan Hoverman 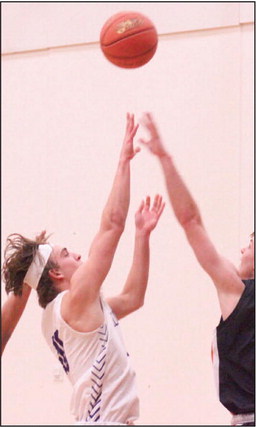 Most Read
News
Open enrollment seats projected for special education
Hey there. Do you or does someone you know happen to live nearby but not in the Stanley-Boyd School District? Are you (or they) looking for special ...
News
Local Church Leads by Example
SPOTLIGHT ON Our Savior’s Lutheran For 138 years, Our Savior’s Lutheran Church has stood as a pillar in the Stanley community. Affiliated...
News
S-B Winter Formal Dance Courts
The sophomore court for winter formal at Stanley-Boyd. Shown in top row, from left are Mykel Wirtala, Lauren Potaczek, Queen Aaliyah Allard, and Bella...
News
A full house at SCA Community Bingo
News
Historical society hears plans for Soo Park pavilion at annual meeting
The Stanley Area Historical Society held their 2022 Annual Meeting on Saturday, January 21. The meeting was called to order at 12:45 pm. President Da...
News
Stanley Chamber Winter Social
“Chippewa County Economic Development Corp. Executive Director Charlie Walker talked about the organization’s efforts to market the community to prosp...
News
Rural internet speed test check
Taking the FCC Speed Test App out one recent virtual learning day, we clocked the following internet speeds. High speed internet is defined by U. S. r...
News
Upcoming Stanley-Boyd Community Red Cross Blood Drives
A recent decline in blood donations may soon make it tough to keep blood products stocked on hospital shelves. We need all eligible donors to come for...