Park’s Emily Dahlstrom is all smiles as she wraps up a first-place finish on the beam with a score of 8.550. Photo by John Molene
Sports
Gymnastics sweep Cretin-Derham Hall

Park went 1-2-3 in the all-around Friday as the Wolfpack soared past Cretin- Derham Hall in girls gymnastics.

Dahlstrom also had a standout night, scoring in addition to her winning beam routine. She was third on the bars (7.9), second on the floor (8.95) and fifth in the vault (8.4).

Park’s Natalya Rugel finished fifth in the allaround with a score of 32.0.

The Wolfpack travels to the Lakeville North Invitational mega-meet Saturday with gymnasts from 17 teams competing. 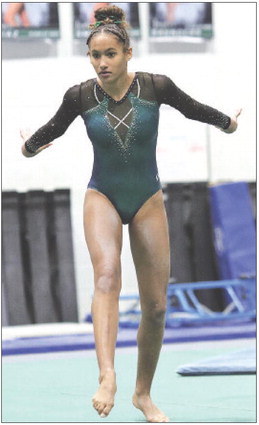 Rainna Jameson of Park begins a tumbling run in her winning floor exercise routine against Cretin-Derham Hall. Jameson scored a 9.025 in the event and tied for first.Photo by John Molene