more. In the left foreground is Mallory Eslinger of the Lady
News
Stanley-Boyd Girls Basketball

The boys came out to support the girls at Os- seo-Fairchild last Thursday, and before long it became apparent this was no ordinary night.

With 2:11 left in the first half, the half-time buzzer (or something much like it), sudden – ly went off. Lily Hoel of Stanley-Boyd, had scored her 1,000th point. It was much needed good news, as the Orioles were fighting uphill against Osseo-Fairchild at the time. With Hoel's two-pointer came a quick celebration courtside from the Oriole boys section, plus a hug with Coach Alison Becker. After the game Becker shared her thoughts on Hoel's milestone.

"Lily reaching 1,000 points in her career is a big deal," Becker said, "considering how the last couple years have gone, with inconsisten cy of games and limited games last season. She should be proud. Her coaches, teammates and community are proud of her as well." Coming off the high point it was back into the game.

At halftime the score was 29-12 Thunder. Coming out of halftime Leslie Derks re covered the ball on Oriole defense from Os- seo-Fairchild, while Kayte Licht made two free throw attempts, while the game mostly went in Osseo-Fairchild's favor, at least for the night. Coach Becker shared thoughts of the game in general and how the Orioles had done afterwards.

“The girls did a fairly decent job on the de- fensive end," Coach Becker said. "Lily did a nice job of pushing Brooke Mcune out of the lane, she forced her to make some tough out side shots. The team also did a great job of doubling down on post players as well and created many deflections, TO's and few nice steals off of this." As to what went wrong against Osseo-Farich – lid game wise, Coach Becker said that, "We needed to capitalize and score off these steals and we would have been in a lot better place in the first half. We really struggled to find oth –

ers to score in the first half." But while things ultimately didn't go the Ori – oles way game-wise, before it was over the lady Orioles had scored four two-pointers by Derks, a two-pointer and free throw by Tina Benson, a two-pointer by Jessica Hazuga, and a full 13 points (five two-pointers and one three-pointer), by Lily Hoel.

The Lady Orioles next face McDonnell at McDonnell this Friday, with JV set to tip-off at 6 p.m., followed with the varsity at 7:30 p.m.

Lily Hoel scores her 1,000th game point in Thursday's game against Osseo-Fairchild, Brooke McCune (right) unable to stop her. Photo by Joseph Back.

Orioles., with Jessica Hazuga and Lily Hoel. Photo by Joseph Back. 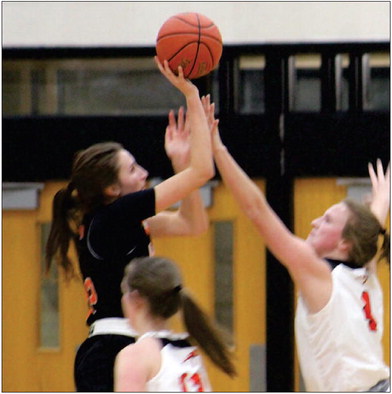 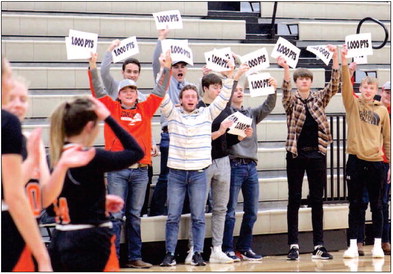