The first of two annual meetings between Ellsworth and Prescott in the historic Highway 10 rivalry game had no shortage of fireworks.

For Ellsworth, the 7 5 vic tory over Prescott on Tuesday, April 19, served as a statement win to the rest of the Middle Border Conference that the Panthers can compete with any team in the league. For Prescott, it was a disastrous loss that puts the team behind the proverbial 8 ball in terms of winning a conference title.

From the first pitch of the game, Ellsworth was just more locked in than Prescott. In the top of the first inning, fresh man pitcher Aliza Acker had a three up, three down inning that set the tone for the rest of the game.

Ellsworth began the scoring in the bottom of the second in ning with some timely hitting and shifty baserunning. After a single and a stolen base by jun ior Anna Lalley, senior Shayla Gilbertson hit an RBI double to deep left center to give Ellsworth a 1 0 lead.

Aubrey Wittenberg, the next batter, hit a line drive down the first base line which got through and scored the run ner from second base to take a

The biggest inning of the game for either team was Ellsworth’s bottom of the fifth inning. Already holding a three run lead, the Panthers looked to grow that lead and apply the finishing blow to Prescott’s remaining chances of winning. That’s exactly what the Panthers did.

After singles to start the in –

Ellsworth senior in fielder Shayla Gilbertson swings at a pitch during the home game victory against Prescott. In the bottom of the fifth inning, Gilbert son changed the game with one swing of the bat when she hit a grand slam to take a 7 0 lead over the Cardinals. Photo by Reagan Hoverman PANTHER WIN

ning by senior Sydney Bartles and freshman Aliza Acker, Ellsworth had two runners on base with no outs. The next two batters were retired via fielder’s choice and a flyout. The fielder’s choice advanced both runners, putting them on second and third, with two outs.

Ellsworth’s next batter hit a groundball to shortstop which should have been a routine putout to first base to end the inning. Instead, Prescott’s first baseman dropped the ball and allowed Ellsworth to load the bases up because of the error.

Ellsworth’s next batter, the aforementioned Gilbertson, saw a pitch she liked and drove it over the center field fence for a grand slam that broke the game open in the Panthers’ favor. The bomb to straightaway center field gave Ellsworth a 7 0 lead going to the sixth inning.

Prescott put up a fight in the sixth inning by scoring five runs, but the game had essentially already been decided in that critical fifth inning. When the final out was made in the top of the seventh inning, Ellsworth secured a 7 5 victory over Prescott to improve to 1 2 in Middle Border Conference play for the season.

The victory over conference rival Prescott served as a state ment victory for the Panthers. On a day when Ellsworth has its best stuff and plays smart, technically sound softball, they can compete with any team in the conference. Panthers’ head coach Kenzie Diercks spoke about the win.

“I knew we had (this type of game) in us, I just wasn’t sure if we were going to see it,” Diercks said. “It was exciting to be able to come out that way. I think we showed, even in that first or sec ond inning when Aliza (Acker) was pitching good, that’s when I knew that we’re going to compete this year.”

While Acker and the defense behind her had a good game in terms of preventing runs, the Ellsworth bats served as the catalyst for the biggest win of the season. Up and down the lineup there is hitting talent that can explode at any time. Diercks spoke about how this game changed her view of the offense.

“This game (changed her view),” Diercks said. “Until this game, we weren’t as aggressive as we needed to be, in Altoona we tried. But this game we said, ‘We’ve got to hit the ball.’ In the pregame circle I said, ‘Let’s focus on us. We know they hit the crap out of the ball.’ Prescott is always aggressive and intimidat ing, and we did that today.”

Diercks said that the victory against Prescott showed the girls on her roster exactly what they’re capable of if they play up to their potential. While Diercks and Ellsworth were ecstatic about the win, Prescott was equally as disappointed.

For Prescott, the loss was devastating, both in terms of how it happened and because of what it does to the conference stand

ings. The loss to a team not named Baldwin Woodville gives the Blackhawks a huge advantage in the race for a conference cham pionship.

The story of the day was mistakes on defense, sloppy play and baserunning blunders that undoubtedly cost Prescott several runs. After the game, head coach Nick Johnson spoke about the loss.

“It was terrible,” Johnson said. “Poor baserunning, our catcher drops three or four balls, and they advance and score, we had a big error at first, (Ellsworth) played catch better than us and that’s what it came down to. We had poor at bats. I don’t want to take anything away from Ellsworth. They battled and they grinded it out. But I think we can look in the mirror and say, ‘I think we beat ourselves.’” In the postgame, Johnson alluded to the baserunning issues throughout the game. The two biggest baserunning errors came in the top of the third inning when the Cardinals had two runners picked off on back to back plays, which shipwrecked a great scoring opportunity early in the game.

Prescott junior star pitcher Taylor Graf was in the circle for the Cardinals. In total, she gave up three earned runs during her appearance. The other four – coming via the grand slam – were unearned because of the error made at first base which should have ended the inning.

“She pitched well enough for us to win the game,” Johnson said. “If we make the routine plays and make the plays that we should make, Taylor (Graf) did enough to win the game. If we don’t clean up things defensively, it’s going to keep happening.”

Although Ellsworth gave up five runs in the top of the sixth inning, the Panthers held Prescott scoreless in the other six in nings of action. The Cardinals have a notoriously great offense and to be held scoreless in six of seven innings is impressive work by Ellsworth.

“For our hitters to only score one time in a seven inning game, that just shows you that we weren’t ready to play,” Johnson said. “I think we thought that we were going to show up and win, and in other sports, we’ve learned that you need to do more than just show up.”

While Somerset is off to a hot start this season, Baldwin

Woodville (2 0) is the primary opposition in Prescott’s quest for a conference title. The loss to Ellsworth is much more meaningful than just the one game in the loss column.

Now, Prescott has to chase Baldwin Woodville the rest of the way, instead of the two teams being square until they play a head to head matchup. Johnson spoke about what this loss means in the context of the entire season.

“It definitely puts us behind the 8 ball,” Johnson said. “Our goal is to always win a conference championship and we know how good Baldwin Woodville is. You can’t slip up (in the con ference race) and we feel this is a team that we should beat. If you look down the line, this is a big loss. That’s not sugar coating it. When you’re chasing Baldwin Woodville, you can’t afford to have a loss like this.” 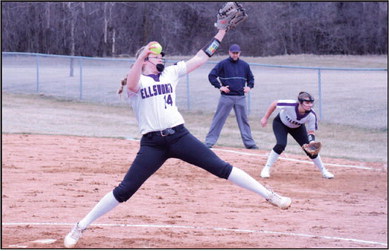 Prescott senior outfielder Grace Franco fields a ball and throws to the shortstop cutoff during the road game against Ellsworth. Photo by Reagan Hoverman 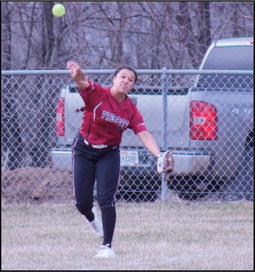