Prescott’s technically sound baseball and dominant starting pitching lifted the program to a 9 0 victory at home against the Ellsworth Panthers on Friday, April 22, and improved the Cardinals’ conference record to 2 1 for the season.

paw Cullen Huppert was deal ing during his starting pitching performance against Ellsworth on a windy Friday afternoon. In the top of the first inning, he went three up, three down which set the tone for the rest of his time on the mound against Ellsworth.

While holding Ellsworth scoreless with his pitching, Huppert also contributed of fensively. To start the bottom of the third inning, Huppert hit a single to shallow right field and was subsequently moved to second base with a sacrifice bunt by sophomore Nolan Thomley.

An error on a routine groundball to shortstop moved Huppert to third and senior Justin Syverson on first base, who stole second on the next pitch to get himself into scor

ing position. That’s when sen ior Mason Bartsch stepped up to the plate and hit an RBI dou ble to deep right field to take a 1 0 lead.

In that third inning, Prescott tacked on two more runs to take a 3 0 lead going into the fourth. Ellsworth’s leadoff sin gle by junior Carter Pearce in the ensuing inning gave Ellsworth a runner on base with no outs.

That quickly changed when he was thrown out trying to steal second to get into scoring position. Huppert’s brilliance on the mound continued after he retired the next two Ellsworth batters via ground

out to get the game to the bot tom of the fourth inning.

Just for good measure, Prescott added two more runs in the bottom of the sixth in

ning and held Ellsworth score less the remainder of the game to secure the 9 0 victory in the Highway 10 rivalry game.

the offense hang crooked numbers while Hup pert pitched a gem from the mound. It was a complete performance for head coach Jeff Ryan’s ball club. He spoke about the win after the game.

“Cullen (Huppert) threw a great game,” Ryan said. “He’s only a sophomore and the great thing about sophomores is that they become juniors and seniors. If you can throw the ball over the plate as a left handed player in high school base ball, you usually have success.”

While Huppert was responsible for a lot of the success, he also had a great defense behind him. Several times throughout the game, Prescott infielders made either diving or leaping plays to retire Ellsworth batters. Ryan spoke about his experienced infield.

“We were solid defensively too,” Ryan said. “We’ve got an experienced infield that has just been playing great with Phil (Seifert), Mason (Bartsch) has been great, and Dryden (Seeley) is doing a good job.”

Ryan continued to speak highly of several players on his team, especially Huppert, and the performance that he put together on the mound, especially for a sophomore playing against a rival school in tough weather conditions.

During his performance against Ellsworth, Huppert had four strikeouts, allowed no runs and pitched a complete game. Ryan stated that Huppert’s success is a testament to his ability to listen and accept coaching.

“He’s a great listener and is a person who is easily coachable,” Ryan said of Huppert. “When you have a kid that will listen and understands that coaches are there to help, those kids are fun to coach.”

The Prescott players have certainly been coachable this season, especially in the baserun ning department. The Cardinals stole over a half dozen bags during the game against Ellsworth to get runners into scoring position. Ryan spoke about the art of swiping bases.

“We work on it a lot,” Ryan said. “Some peo ple think it’s all about speed and it’s really not, it’s about getting a good jump and it’s about forcing the defense to make plays. We like to put pressure on the defenses, and we can run the bases. I think it makes us that much better.”

While Prescott enjoyed the success on Friday afternoon, the mood was much different for Ellsworth head coach Brandon Voelker. He spoke about what he saw from his team after the loss.

“It’s a matter of locking in and focusing, and our guys today just weren’t there,” Voelker said. “I thought we had a couple of guys who were locked in at the plate, but the other guys, it’s tough. We’re missing a couple of starters, but our backups should be able to step in.”

While Voelker acknowledged the missteps from his team throughout the game against Prescott, he also gave credit to a fundamentally great Cardinals team that deserves respect.

“This is a really good Prescott team and I think they’re well coached,” Voelker said. “They’re always going to be defensively sound, so we need to come ready to play at a very top level. They’re not going to make mistakes; they throw it well and they put the ball in play. It’s a game you can’t have mistakes.”

Throughout all three conferences in Pierce County: Dunn St. Croix, Big Rivers and Middle Border, teams have struggled because of the un usually adverse weather conditions throughout April.

Ellsworth drops to 1 4 overall and 1 3 in Middle Border Conference play with the loss. Prescott improves to 4 3 overall and 2 1 in con

The next game on the schedule for Prescott is Thursday, April 28, when the Cardinals host Osceola. As for Ellsworth, the Panthers are on the road against Baldwin Woodville on Thurs day, April 28. Both of those games are set to begin at 5 p.m. 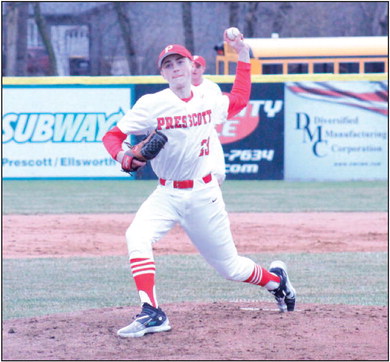 Prescott sophomore pitcher Cullen Huppert throws a pitch during his start on the mound against Ellsworth on Friday afternoon. In his completegame performance, Huppert pitched seven innings, tallied four strikeouts and didn’t allow a run.