It’s been the week of the Highway 10 rivalry between Prescott and Ellsworth. Both towns had their baseball and softball teams play each other and on Thursday, April 21, the track and field teams competed against each other at the Ellsworth Invitational.

While there is some confu sion among reporting sites for the final team scores of the meet, the initial reports have the Osceola boys in first place with 118 points, Ellsworth in second with 103 points and Prescott in third with 100 points. On the girls’ side, Osce ola in first with 134, Prescott second with 90 and Ellsworth in fifth with 25 total team points.

In the first month of the sea

son, Osceola has established it self – on both the boys’ and girls’ sides – as the best team in the Middle Border Confer ence. Of course, there is a lot of season left, but right now, Ellsworth and Prescott are competing for second place.

That race for second place at the Ellsworth Invitational was close on the boys’ side, as it was decided by less than five points. One of the most com petitive areas between the two teams is in the relay events, which both Ellsworth and Prescott have a strong history of.

At the Ellsworth Invita tional, Ellsworth earned first place in the 4×200 relay while Prescott took second with the relay times separated by less than one second. The two schools love to compete, and Prescott coach Emily Cal abrese said competition among the two teams makes both pro grams better.

“My boys love chasing Ellsworth,” Calabrese said. “Last year it was a battle back and forth too, and I say back and forth because we had them a few times last year because of baton issues. We always want to see them. It’s really ex citing for our boys to get to compete against them. If we don’t see each other, we don’t really see much else that will bring out the best in us.”

The talent in the relays is among some of the best in Prescott history. According to Prescott boys’ coach Carl Cal abrese, the 4×100 group is close to breaking the school record, and competing against Ellsworth pushes their relay group to get even better.

“Our boys 4×100 is close to the school record,” Carl Cal abrese said. “Having Ellsworth to chase and help pull us along a little bit more is awesome. It’s fun to watch and for them to have each other.”

vitational on Thursday after noon. Ellsworth finished in first place with a time of 43.96 seconds and Prescott took sec

Some of the success in the relays for Ellsworth was in part due to Bo Hines’ return from a non covid sickness, as he missed extended time to begin the season. Throughout last season, Hines was an integral part of the relays that made noise at the state track and field meet in La Crosse. Ellsworth head coach Drew Pechacek spoke about Hines’ return.

“This was Bo’s first week back and we only had him in three events,” Pechacek said. “He was in great shape before he got sick and is working his way back. As for the relays, they are very confident with what they can do. We’re plan

Other notable results for Ellsworth include second place in the boys’ 4×800 relay, three of the top five times in the 100 meter dash, led by senior sprinter Max Grand, and Alex Pazdernik continues to domi nate every distance event in the Middle Border Conference.

In addition to his return to the track, Hines also won the long jump event. Brandon Carlton and Braxton Quade finished first and second re spectively in the boys’ shot put event. Coach Pechacek spoke about the field events this sea son.

“Brandon and Braxton are both new this year and have re sponded very well to coaching so far,” Pechacek said. “In terms of field events, we have only been able to work on the shot. Everything else was a surprise. We were able to be very competitive in the long jump and triple jump which was great to see. With limited time outside this spring, we have not spent the time needed to fine tune some of the other events yet.”

Ellsworth also had success on the girls’ side in some of the events, including sophomore Kayla Kressin’s first place fin

As for the Prescott girls, there was a lot to celebrate in cluding a win in the 4×800 relay, Kennedy Braun’s sec

ond place finish in the 100 meter dash, second in the 4×200 relay, a win in the 4×100 relay, Ella Johnson’s win in the 3,200 meter run, and posting three of the five best scores in the pole vault, which included Addison Huppert, Maddie Matzek and the aforemen tioned Johnson.

“We have a ridiculously good group of girl pole vaulters,” Carl Calabrese said. “That Ellsworth meet, that pole vault meet was the most people we’ve seen. It was a good vault contest for the girls, and we had three girls (in the top five).”

The pole vaulting group is strong, as it includes Maddie Matzek, who currently holds a share of Prescott’s school record in the event. According to Carl and Emily Calabrese, those records could be broken by any of these girls.

“One is our current school record holder,” Emily Cal abrese said. “Truthfully, any one of them could hit it again this year. Ella Johnson and Maddie Huppert are the other couple who are chasing that record right now.”

While neither team is build ing their roster to win meets right now, both Ellsworth and Prescott have put impressive performances on display this season, including those at the Ellsworth Invitational on Thursday afternoon.

Up next for both teams is a meet on Tuesday, April 26, at Baldwin Woodville High School. That meet is expected to begin at 4:30 p.m.

Ellsworth sophomore Kayla Kressin takes first place as she crosses the finish line in the 400 meter dash at the Ellsworth Invitational on Thursday, April 21. Photo by Reagan Hoverman

Ellsworth’s Bo Hines hands off the baton to senior Jack Janke during the 4×100 meter relay. Ellsworth earned a first place finish in the event after defeating Prescott by less than a second.

meter run at the Ellsworth Invitational. Photo by Reagan Hoverman 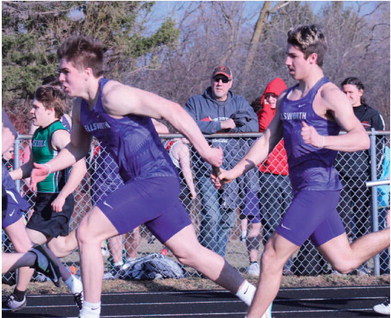 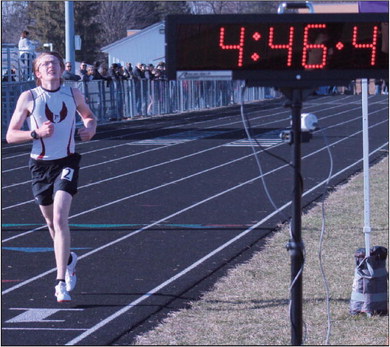